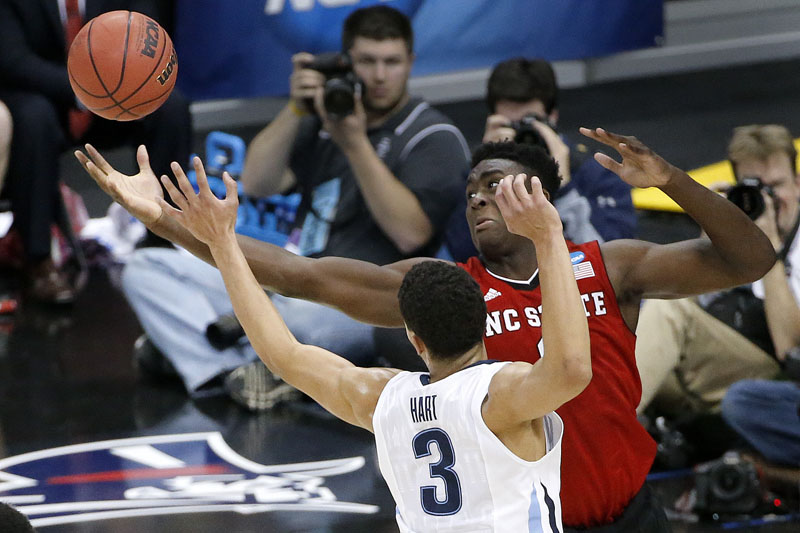 The Associated Press N.C. State's Abdul-Malik Abu, right, and Villanova's Josh Hart (3) reach for a rebound Saturday during the second half of a third-round NCAA Tournament game in Pittsburgh.

RALEIGH — Gone are the days when North Carolina State freshman Abdul-Malik Abu was in a hurry when he caught the ball inside or was mentally trying to keep up with all the team’s defensive principles.

The 6-foot-8 forward looks at ease and has been a major factor in the eighth-seeded Wolfpack’s push to the NCAA Tournament’s Sweet 16.

“Confidence can take you a lot of places,” Abu said. “The more confident you are, the more you’re capable of things you never thought you could do.”

Abu moved into the starting lineup for the start of Atlantic Coast Conference play in January and has been there ever since, making slow and steady progress through the season.

Now the Boston native has had three straight double-figure scoring games, including a double-double in last weekend’s upset of No. 1 seed Villanova in the East Region. More importantly, he looks more assertive and confident heading into Friday’s game against Louisville (26-8) in Syracuse, New York.

“By him being in the games, getting the in the flow and we’re getting him the ball where he’s comfortable at, you can be yourself,” junior guard Trevor Lacey said. “We’re not putting him in a situation to where he’s not comfortable and he’s going to play out of character.”

Abu had just five double-figure scoring games through the end of February, but had 10 points in the ACC Tournament loss to Duke. Then he had 13 as the Wolfpack (22-13) rallied from 16 down to beat LSU in the NCAA round of 64, though his biggest play was having enough restraint to avoid tipping the ball when BeeJay Anya’s last-second winner was bouncing around the rim — a touch that would have nullified the basket as offensive goaltending and ended the Wolfpack’s season.

Abu followed with 13 points and 12 rebounds in a season-high 31 minutes against Villanova. One second-half sequence stood out for coach Mark Gottfried in that one, when Abu “made his mind up he was going to get something done” and had four straight offensive rebounds on the same possession before being fouled.

“I think back to some early games and every time he caught the ball on the block he was in such a hurry,” Gottfried said. “That clock, that speed in your mind is going so fast and you feel like you’ve got to go 100 miles per hour to make a play. It seems now he’s relaxed, he takes his time, he’s got good poise, he’s rebounding the ball really well.”

Abu, who is averaging 6.4 points and 4.7 rebounds on the season, is enjoying the Wolfpack’s tournament run, joking that “girls are texting you that never texted you before” and that “your life can change in a couple of games.” But he also said he and his team are determined to keep advancing, too.

“It’s just a blessing and I’m blessed to be here,” Abu said. “I’m grateful to have this opportunity to play in front of thousands of people every night tuned into March Madness. I’m just embracing it. I’m not trying to let it overwhelm me, but I also want to go out there and win so I’m trying to play at the best of my ability.”