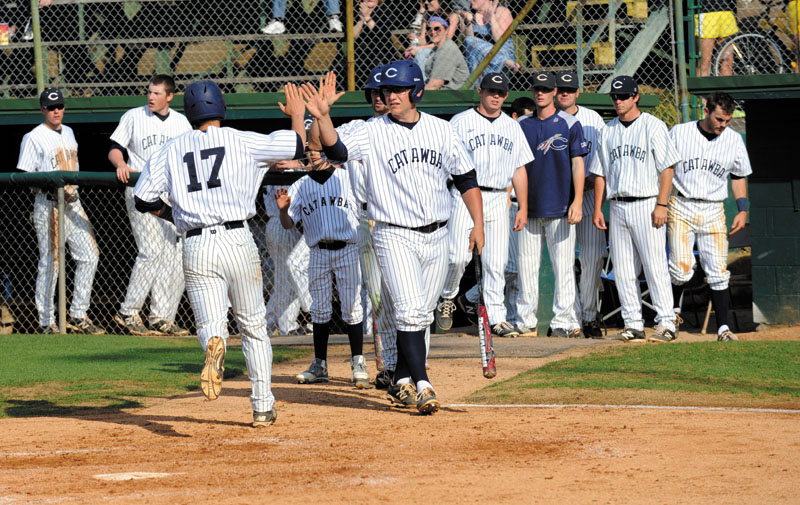 Photo by Wayne Hinshaw/For the Salisbury Post Catawba's Will Albertson (17) is greeted at the plate by T.J. Wharton (21) after hitting his second home run in the Indians' 12-10 loss on Tuesday to Mt. Olive.

SALISBURY — The 1,000th win of Mount Olive coach Carl Lancaster’s 28-year tenure was memorable. Mount Olive held off Catawba — and hot-hitting Will Albertson — to escape Newman Park with a 12-10 victory on Tuesday.

“You can’t play the way we played and beat Mount Olive,” Catawba coach Jim Gantt said. “They’ve got a great-hitting team, and we gave them a bunch of extra outs.”

Albertson was credited with another 5-for-5 day, although one of those hits was a sizzling grounder right at the second baseman that was generously scored. Two of his hits departed the cozy, old ballpark for his 12th and 13th homers. Officially, he’s 38-for-48 (.792) in his last 11 games. He’s belted eight homers in those 11 games.

“No one does what Will is doing even in Little League,” Catawba center fielder Blake Houston said. “I’ve never seen anything like it. No one has.”

“We started the season 17-2 and we were rolling and ranked second in the country,” Lancaster said. “But then we had some guys go down and we’ve struggled. This was a really good win for us. We beat a heck of a team that no doubt will be a regional team and we beat a team with class coaches.”

Catawba used eight pitchers. Starter Avery Bowles took the loss but deserved a better fate. Defensive mistakes snowballed on the Indians. They failed to turn double plays or field bunts, and the hard-hitting Trojans piled up runs for a 10-2 lead.

In the bottom of the third, Albertson drilled a solo homer to left-center to inject hope into his teammates and the crowd.

“That’s a good club we were playing,” Albertson said. “But we didn’t give up. We put together good at-bats, we got to their bullpen, and we started coming back.”

Houston (3-for-4), freshman right fielder Luke Setzer (3-for-4) and designated hitter T.J. Wharton (2-for-4) also had strong days for the Indians.

Zak Orrison and Stephen Wallace had three hits each for the Trojans. Joe Koehler homered.

Albertson led off the fifth by golfing a low pitch out of the park for his second homer. That blow cut Catawba’s deficit to 11-4.

With Catawba down 12-9 in the bottom of the ninth,  Houston crushed his fifth homer, but it was a solo. The game ended with Albertson waiting patiently on deck.

“We had a 10-2 lead, and I was thinking there was no way we could blow this game,” Lancaster said. “But we nearly did.”

Catawba had 15 hits but left 10 on base and hit into two double plays.

“We definitely had our chances,” Gantt said.