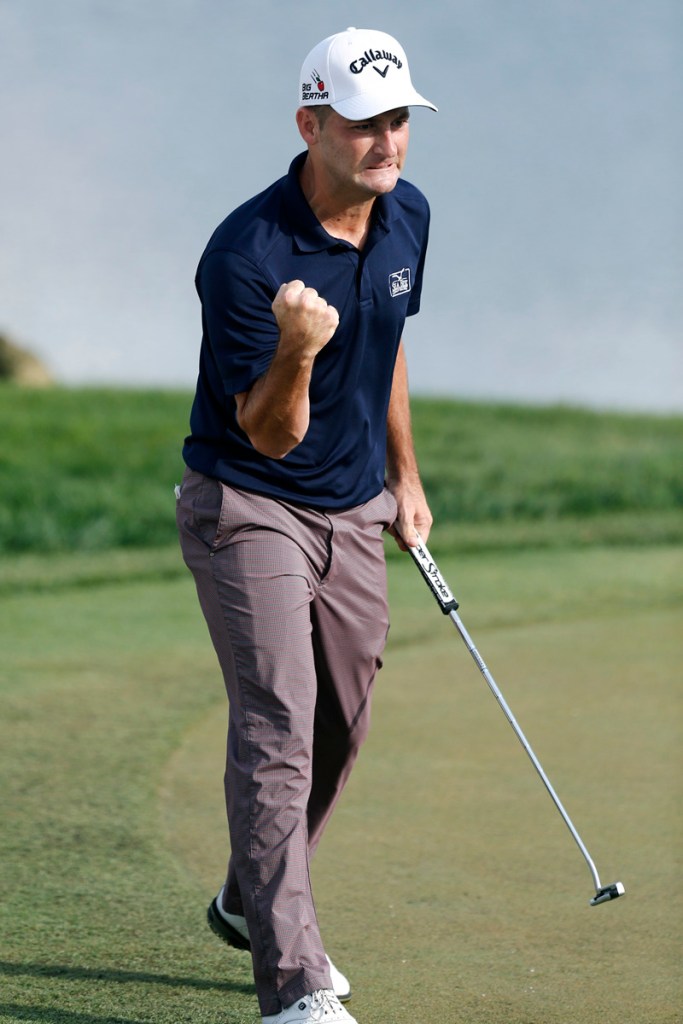 The Associated Press Matt Every celebrates Sunday after sinking a putt for birdie to take the lead and win the Arnold Palmer Invitational in Orlando, Fla. With the victory, Every earned a spot in the Masters. The field for the tournament could go over 100 players for the first time in 50 years.

ORLANDO, Fla. (AP) — Matt Every needed a victory at Bay Hill to get into the Masters, and he was only being honest when he shared what he was thinking as Henrik Stenson faced a birdie putt on the final hole to force a playoff.

Augusta National would have had reason to root for Stenson.

It has managed to keep the field at the Masters under 100 players for nearly 50 years, a streak that is in serious jeopardy going into the final two weeks. Every was the fourth PGA Tour winner in the last six weeks to qualify for the Masters.

That brings the total to 95 players at Augusta — including Tiger Woods, the great unknown — heading into a pivotal week.

This is the second and final cutoff for players not already eligible for the Masters to qualify through the top 50 in the world ranking. Three players in the top 50 are virtually assured of staying there — Anirban Lahiri of India (No. 35), Bernd Wiesberger of Austria (No. 41) and Branden Grace of South Africa (No. 43).

Marc Warren of Scotland (52), Harris English (53) and Alex Levy of France (54) are all playing this week either in the Texas Open or the Hassan Trophy in Morocco. The Masters also will take the winners of the Texas Open and Houston Open the following week if they’re not yet eligible.

Depending on two tournaments on opposite ends of the world — and depending on Woods — the Masters could have more than 100 players for the first time since there were 103 players in 1966.

From its inception in 1934, Augusta National was meant to be exclusive in so many ways, including its invitation-only tournament each spring that has grown up to be must-see TV around the world. The club believes a limited field enhances the experience of the players.

The century mark has been challenged four of the last five years, and Augusta National is paying attention.

“It is borderline to be able to present the kind of competition that we want to,” Masters chairman Billy Payne said in 2011 when there were 99 players. “It is more than we normally have. We say every year in response to that question that we look and we study the qualifications, which we do. But we are really going to look at it this year, because there is a maximum number of competitors for which we can give the experience that we want them to have and do it in a way that’s manageable.

“The 100 pushes that limit quite significantly.”

Augusta National does not rush into changes, but it does react. Two years later, Payne announced changes aimed at keeping the field below 100 players. It wisely kept winners from PGA Tour stand-alone events, including the six held during the fall start of the season. It also eliminated the category of top 30 on the money list. It reduced the top finishers at the previous Masters from top 16 to top 12, and at the U.S. Open from the top eight to the top four.

More help is on the way.

Ben Crenshaw is playing his final Masters. It won’t be long — maybe next year — before Tom Watson chooses to no longer play. And this is the final year of the U.S. Amateur Public Links, so that spot effectively is awarded to the winner of the new Latin America Amateur Championship.

Changes, however, are most likely coming as golf gets deeper and the Masters field gets bigger.

It would be a mistake for the club to stop awarding invitations to PGA Tour winners. In an era of $7 million purses, there should be no greater motivation than winning. A trip to the Masters is usually the first thing a PGA Tour winner mentions (see Matt Every).

Also, the Masters should continue to rely on the world ranking to provide opportunity to players from every corner of the world. That category is loaded with international players, and there’s a reason for that. PGA Tour members have plenty of other avenues to get to the Masters.

The world ranking, however, allows for one change that is overdue.

Perhaps it’s time to get rid of the first cutoff for the top 50 at the end of a calendar year, and simply have one deadline at the end of the Florida swing. That still allows two weeks for players to plan a trip to Augusta. And the tournament is more likely to have the top players in form.

There was so much turnover in 2010 that five players were added to the field after the March cutoff. Five others who had been in the top 50 at the end of 2009 still got into the Masters. Three of them missed the cut.

The last time the field topped 100 players, Jack Nicklaus won his fourth green jacket. No matter how many players tee off on Thursday, the greatest tradition still is who leaves in a green jacket.