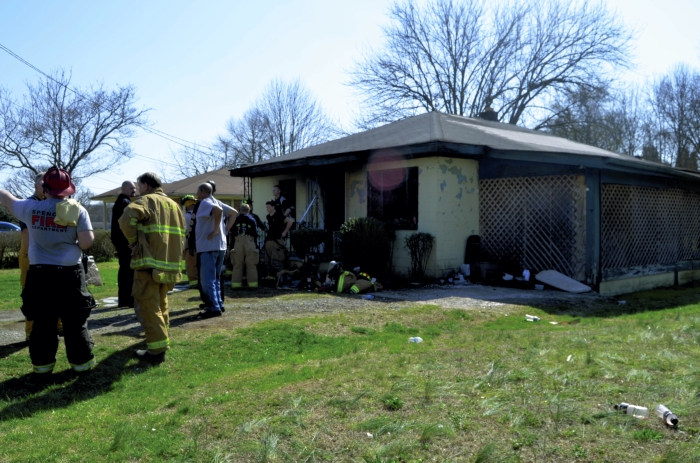 Robert Tabor Sr., center, and his son Robert Tabor Jr., talk to fire personnel about a fire at the 244 Tabor Drive home where Robert Jr. lives. Robert Jr. said he left grease on the stove and forgot about it while across the street talking to his father. The fire destroyed the home, displacing Robert Jr. and his 6-year-old daughter. Robert Sr. has owned the home since the late 1950s. Shavonne Walker/Salisbury Post

A Monday afternoon fire at a Tabor Drive home completely destroyed the home, displacing a father and his 6-year-old daughter.

Robert Tabor Jr. was about to cook some French fries and left grease cooking on the stove at 244 Tabor Drive when he went across the way to chat with his father, Robert Tabor Sr.

When the elder Tabor mentioned something about fire insurance, Robert Jr. remembered he had grease on the stove. When he ran back to the house a fire had spread in the kitchen.

Robert Tabor Sr. said he’s owned the house since the late 1950s and raised his four children in the house. He said he was glad his granddaughter was not home at the time of the fire.

The initial fire call was made around 2:10 p.m. and within 20 minutes the fire was under control, said Ellis Cross Country Fire Chief Jeff Whitley.