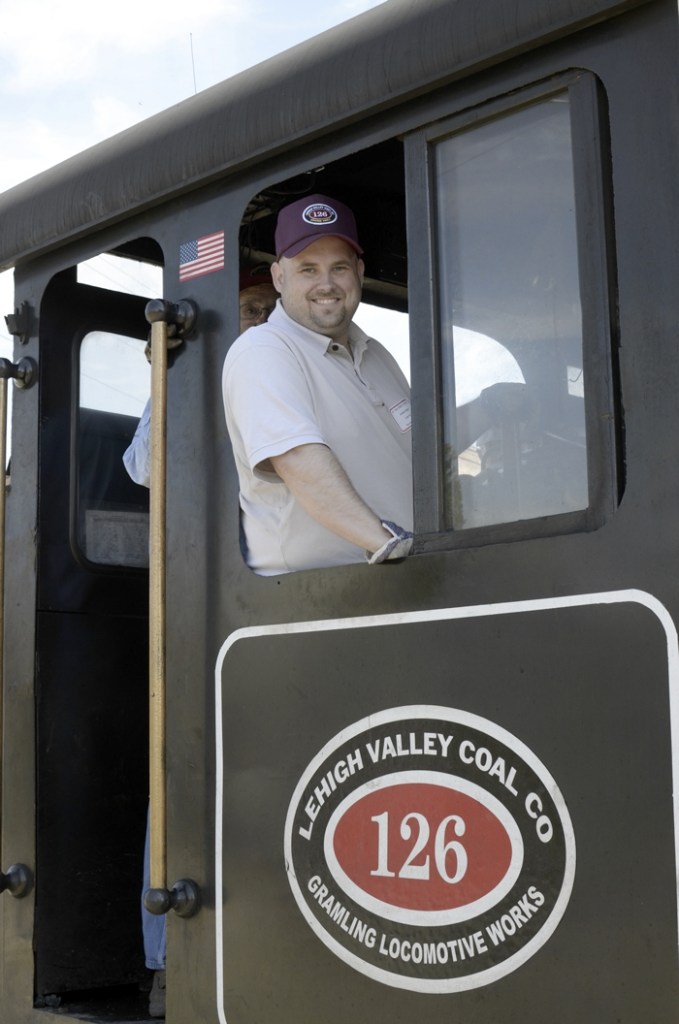 Hugh Fisher/For the Salisbury Post Jeremy Ousley, of Greensboro, gets ready for his turn driving Lehigh Valley Coal Engine No. 126.

SPENCER— The steam locomotive is like a living thing, volunteer Lindsay Abee said as he stood near the tracks where Lehigh Valley Coal Engine No. 126 waited for its next trip.

“You can feel the energy as the steam goes through the throttle,” Abee said. “It’s pure adrenaline.”

Standing by the rails as No. 126 takes off, you can see how the locomotive seems to have a life of its own.

It consumes black coal by the shovelful. It breathes out steam and smoke.

And its cry literally echoes around the town of Spencer, a wailing whistle seldom heard here since the glory days of steam power.

On several Saturdays each spring and fall, the N.C. Transportation Museum’s At the Throttle event makes some lucky railroading fans’ dreams come true.

For $150, they’re taught how to control the steam locomotive, then spend half an hour driving it up and down a stretch of closed track on the grounds of the former Southern Railway shops.

With a trained engineer supervising them, organizers say young and old have taken a trip straight out of the history books.

All 15 time slots at Saturday’s event were booked, and “At the Throttle” events usually sell out, Abee said.

Over the course of an hour, more visitors to the Transportation Museum walked down to trackside, asking how they could learn about the next event.

The 2 p.m. slot belonged to Hans Wiegert of South Carolina.

His wife, Elaine, bought him the trip as a Christmas gift.

“He’s very excited,” Elaine said, standing by the track with a camera to record her husband’s journey. She said her husband had gotten up early Saturday morning, eager to be on the way to Spencer for his chance to ride the rails.

Inside the cab, levers operate the brakes and throttle, and change the direction of the drive wheels, forward and reverse.

A small pile of coal sits behind the boiler, which radiates heat throughout the small space. The fireman monitors steam pressure and feeds coal into the boiler as needed.

“You just kind of bump it to get it moving,” he said, telling Wiegert how to overcome the steam pressure in the boiler and start the engine moving.

The training takes about five minutes. Once Wiegert knew his way around, the brakes were released and the steam whistle wailed.

“There you go. Perfect,” Barnett said, as Wiegert let out on the throttle. With rhythmic puffs and rattles, the locomotive set off down the track.

“Now we’ll get started uphill,” Barnett said, “so air it out, come on.”

Wiegert pulled the throttle out another notch, and the engine picked up speed for the slight grade ahead.

After about 500 yards, it was time to slow down, stop and put the engine in reverse, the locomotive sending a thin column of smoke into the blue sky along South Salisbury Avenue.

“There’s probably very few old-timers who remember that,” said Bill Hayward, a volunteer acting as fireman on this run.

Coal smoke and steam whistles, once a daily occurrence  in Spencer, are now a part of history.

Even so, 55 years after the Southern Railway steam engine repair facility closed, events like this bring a little taste of those days back to town.

“We got this engine in 1993,” said Barney Gramling, one of the owners of the engine.

“It was still sitting in the roundhouse, in the only stall left with tracks in it,” Gramling said.

In its heyday, the Lehigh Valley Coal Co. of Hazelton, Pa. used the engine to move cars around the yard at the Hazleton Shaft Colliery.

Today, it’s used a few times a year for special events, he said.

“I don’t run it that often, but I sure do get a lot of joy watching someone else run it,” Gramling said. “A lot of them say it’s not as hard as they thought.”

According to Gramling, many of those who ride say driving a locomotive is on their “bucket list” of things they want to do before they die.

As Wiegert climbed down from the cab and shook hands with the crew, he said he felt “like a kid on Christmas Eve.”

Terry Seaks, professor emeritus of economics at the University of North Carolina at Greensboro, is one of the volunteer crew who help keep the steam engine running for At the Throttle events.

Seaks and Hayward took turns as fireman while Barnett supervised each trip.

“It’s a very popular thing, and as you can probably tell, it’s labor-intensive,” Seaks said.

“A lot of people don’t realize how much work behind the scenes goes into this,” he said. “There’s a reason the railroad got rid of steam engines.”

And yet the steam locomotive is an American icon, with many loyal fans.

Not far away, volunteers talked about another steam locomotive, the Norfolk & Western Class J No. 611, which is being restored at the N.C. Transportation Museum.

Built in 1950, Engine 611, the focus of a multi-million-dollar restoration and preservation effort, is the last of its kind.

According to specifications on the website for the Fire Up 611 restoration project, the Class J could pull a 15-car passenger train at over 100 miles per hour.

The Gramlings’ Engine No. 126 wasn’t made to run on the main lines like the streamliners of steam power’s golden age.

Even so, driving a real, live steam engine is a dream many long to see come true.

“I’ve seen many a wife or sibling just very, very moved, saying that their brother, sister or father had always wanted to do this,” Seaks said. “It’s just a feel-good experience.”