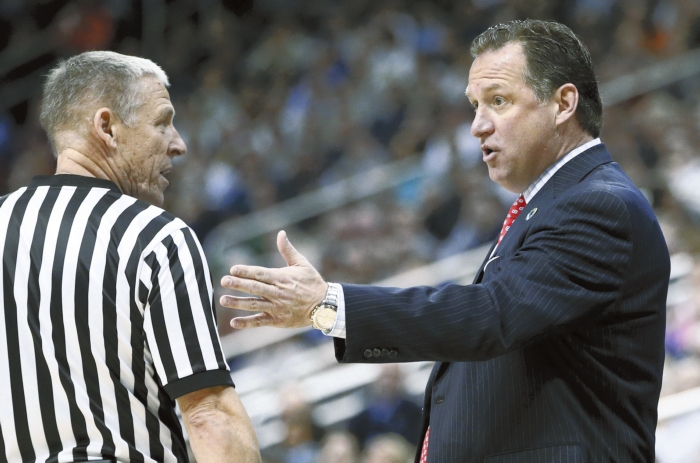 Somebody up there likes North Carolina State.

Three decades after one improbable run ended with the most famous finish in NCAA history, the Wolfpack are off and rumbling toward another. They followed up a heart-stopping win over LSU in their opener with the biggest bracket-buster of the tourney so far— a take-’em-apart, then take-’em-down 71-68 win Saturday over East Regional No. 1 seed Villanova.

“We respect Villanova, but we’ve seen good teams,” N.C .State coach Mark Gottfried said afterward, and that was no exaggeration. The Wolfpack drew Duke, North Carolina and Louisville in ACC play. They toppled them all.

“We’ve seen a lot of them in our conference. You see them about every night,” Gottfried added. “So a league like that prepares you for games like tonight.”

On the other hand, almost no one saw N.C. State’s 1983 NCAA title coming, including the players themselves. The championship game ended with Lorenzo Charles catching Dereck Whittenburg’s last-second, 30-foot heave, then dunking it before any member of Houston’s heavily favored “Phi Slamma Jamma” fraternity could react.

Expecting the unexpected has been an N.C. State mantra ever since. If any player on this year’s team needs a refresher course, Gottfried can turn to Whittenburg, who’s back on the N.C. State bench as one of his assistants.

“There is some higher purpose in this,” said Villanova’s Darrun Hilliard, who led all scorers with 27 points. “We’re going to take this one on the chin and we’re going to come back tomorrow as better people.”

But the way the Wolfpack played — unfazed by defensive pressure, balanced inside and out on the offensive end — there was no doubt who was better on this night.

THE ENVELOPE PLEASE: The race for conference bragging rights is a long way from over, but the contenders are already in focus. The ACC and Pac-12 both remain perfect, 9-0 and 7-0 respectively, with both having already locked up three Sweet 16 spots. The Big Ten (5-3) is the only other league above .500. And while the SEC is just 4-4 overall, Kentucky looks more likely than ever to make the whole argument moot.

PICK YOUR POISON: It’s easy to be intimidated by how tall Kentucky is. And how deep. Often missed by the eyeball test, however, is how opportunistic and gritty the supposedly glamorous Wildcats can be when the situation calls for it. Cincinnati tried roughing them up and the Wildcats responded, jiu-jitsu style, by patiently piling up free throws to pull away. It was no coincidence that their 64-51 final margin of victory was closely reflected by a 20-9 edge at the charity stripe.

RICH GET RICHER? Kentucky may be the chalk, but the quantity vs. quality debate will have to be settled before the crown rests on any team’s head. With gaudy records already, both the ACC and Pac-12 can bolster their odds Sunday: the former sends out Duke, Virginia and Louisville in search of more Sweet 16 spots, while the latter has Oregon trying to get into the mix.

WHAT’S WRONG WITH KANSAS? Easy. Nothing that a good intrastate skirmish won’t cure. And that’s exactly what’s on tap when blue blood Kansas finally plays upstart Wichita State. The Jayhawks have been effectively ducking the Shockers for 25 years. That won’t be an option Sunday.

“It’s a funny dynamic,” Wichita State’s Fred VanVleet said the other day, “because the blood-hate rivalry is more for the people who grew up in the tradition. You take a guy like me from Illinois who doesn’t know anything about it, it’s not quite the same.”

Apparently, though, it didn’t take VanVleet long to work up a lather. “I’ll hate them just as much when it’s time to suit up,” he said, “because they’re in our way to the Sweet 16.”

ONLY ONE AND HE’S ALREADY DONE: Picking a perfect bracket doesn’t seem as sexy this year, maybe because Warren Buffet’s $1 billion payoff to a potential winner last year has been shelved this time around (likely because of ongoing litigation tied to the promotion). ESPN.com is offering a measly million, but that likely won’t get paid out either. By midday Saturday, there remained only one perfect bracket on the site’s contest and the author has Duke beating Kansas 58-0.