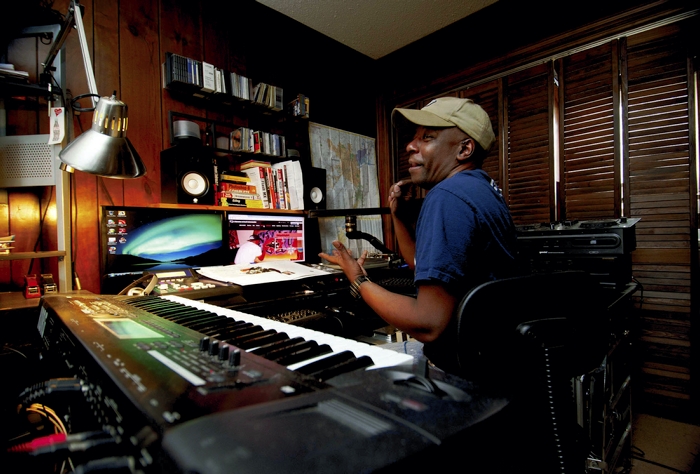 JON C. LAKEY / SALISBURY POST Aaron Sewell is currently in remission from the cancer that caused him to lose a lung and endure many months of chemotherapy. During his treatment, he focused on his passion — disc jockeying.

Music is what saved 52-year-old Aaron Sewell’s life. He discovered his love for music in the 1970s when as a child he turned into a DJ at age 10 behind the closed doors of his bedroom in the family’s co-op in Brooklyn, N.Y.

He even fulfilled his dream of becoming a DJ and would later put it on hold for marriage and family. But, in 2011, after doctors found a cancerous tumor in Sewell’s sternum, he revisited his first love.

Living in a small New York apartment building didn’t allow Sewell the luxury of having the necessary equipment.Besides, he said his mother was “not having it” so he focused on studying traditional art in school. He also studied musical engineering at the Center for Media Arts in New York.

Sewell was inspired by music early in life while listening to the jazz music his father played. The family moved into the Crown Heights neighborhood in New York, where the happening thing was guys who played a musical instrument in a band. Sewell didn’t want to be part of a band — he wanted nothing more than to scratch on vinyl.

In the 1980s, as soon as Sewell could move out on his own, he began building his equipment and record collection. To date, Sewell has 10,000 vinyl albums from various music genres.

“When I put enough records together to learn my craft, I started to get gigs locally,” he said.

Early in his career as a DJ, he met Henry Lasgiddie Akinnouye at a textile firm in Manhattan, where both men worked in the mail room. The two became fast friends and collaborated musically for a number of years until they both branched out on their own.

In the late 1980s and early 1990s, Sewell’s oldest brother Stephen introduced him to Willie Wall, a music promoter, remixer and producer. Wall listened to a mixtape Sewell created and liked what he heard. Wall gave Sewell an opportunity to play at many Brooklyn and Manhattan parties.

Sewell was finally getting to do what he loved, but it was a learning curve, he said.

He had to learn what people liked and learn to read the mood of a crowd. If the mood changed, the music needed to change.

Sewell said he doesn’t discriminate by only using certain genres, he can sample anything — classical or rock, use a lyric or a melody.

His passion, he said, is house music or dance music.

“What I love about the new technology is the possibilities are endless with editing songs but as a purist there’s nothing like vinyl,” he said.

Sewell worked at Coca-Cola, a company that he enjoyed working for, he said. However, he had to quit following surgery and subsequent chemotherapy treatments.

Sewell said he was pushing a floating display in a store and found it hard to maneuver.

“I thought it was because I was exerting myself,” he said.

He eventually went to Novant Health Rowan Medical Center, told them he was having some chest pains and they rushed him through the emergency room and into a room.

Sewell said he completely figured the doctor would tell him not to exert himself and send him home. He never expected to hear the words “you have cancer.”

He was diagnosed with cancer.

His mind went blank momentarily and then he snapped back to reality, Sewell said.

The doctors required four to five months of chemo running through his body for 72 to 96 hours several times a week.

He had a tumor in his chest and three to four tumors in his right lung, which eventually had to be removed. He returned to a bit more of chemo following surgery in the event there was any cancer remaining.

Now that he’s cancer free, Sewell is limited in his activity level.

“I’m sitting in the house and looking around thinking what else can I do,” he said.

A return to music

A nurse asked Sewell about his hobby and he told her it was music.

He began to slowly work back into the world of DJing. He first had to learn the “new way” using computer software and a digital turntable. Sewell had a lot of time to teach himself the software that he now uses with ease.

He was lamenting about his surgery while at Benchwarmers and began talking to Jordan Littleton, the owner’s brother, who said they were looking for a DJ for an upcoming event.

But he credits Jordan with giving him the chance to get back out there and even try again. He went on to DJ at Benchwarmers for a year.

Sewell works part-time at a Lexington convenience store and at other times he’s working on his craft. His company, A&M Intermedia includes DJ services, lighting (Laser/LED Lightworks), art and design (SkipCityArt) as well as video services.

Anyone who has seen the colorful Kiddie Land Kindergarten bus may have seen Sewell’s art. He spent four months painting the bus that has been featured in many downtown parades and a mural inside the day care center. His specialties include sketches, murals, and graffiti art.

Sewell said he just hopes that he can inspire others who face an obstacle, be it cancer or other situation, to know they can overcome it.

In addition to music, Sewell also credits his neighbors, the doctors and staff at Carolina Oncology, Novant Health Rowan Medical Center who he says helped get him through this ordeal.