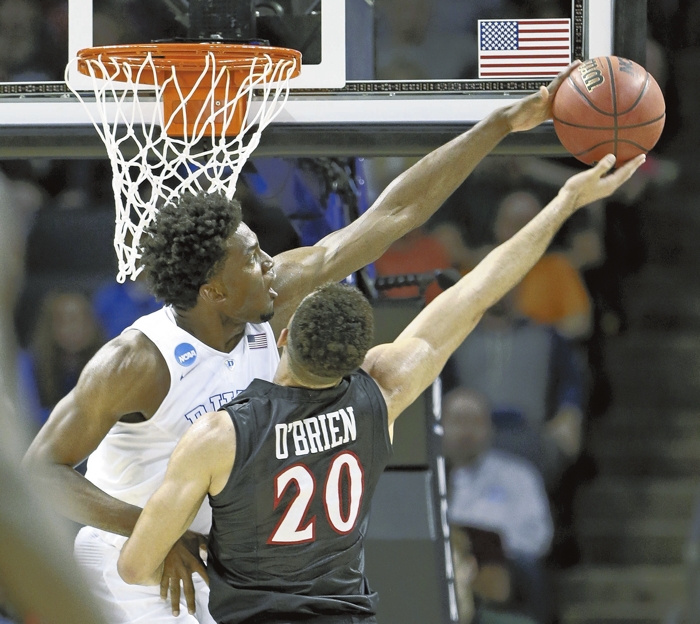 Duke's Justise Winslow, left, blocks a shot by San Diego State's J.J. O'Brien (20) during the first half of an NCAA tournament college basketball game in the Round of 32 in Charlotte, N.C., Sunday, March 22, 2015. (AP Photo/Gerald Herbert)

CHARLOTTE (AP) — Jahlil Okafor showed off all the moves — a spin, a dribble drive, a short jumper — that has made Duke’s freshman big man possibly the nation’s top player.

When he’s playing like that, the Blue Devils have a shot to finish as the nation’s best team right alongside him.

Okafor scored 18 of his 26 points in a dominating first half and top-seeded Duke beat San Diego State 68-49 on Sunday in the NCAA Tournament, sending the freshmen-led Blue Devils back to the Sweet 16 to continue their push for coach Mike Krzyzewski’s fifth national title.

Duke — holding a No. 1 seed for the 11th time in 18 seasons but its first since 2011 — advanced to face fifth-seeded Utah in Houston’s South Regional semifinals. The Blue Devils (31-4) reached the Sweet 16 for the 22nd time under Coach K, who said this group featuring four freshmen among its eight scholarship players is still improving.

“They’re together,” Krzyzewski said. “We have talent, we’re getting older by experience, and so we just — we got better here these two games.”

Okafor scored 21 on 9-for-11 shooting against the seriously undersized Colonials, then made 12 of 16 shots against the Aztecs — who had size to wrestle with him but no way to stop him.

“Okafor is a load,” Aztecs coach Steve Fisher said. “He is hard to guard. … But he’s not the lone ranger. Winslow can play. They have a terrific team and they can play. They played like a No. 1 team today.”

Winslow put on his own show with five assists, four steals and three blocks, one a jaw-dropper on JJ O’Brien at the rim. That set the ball loose in transition for Quinn Cook to bury a 3-pointer, then pretend to holster pistols as he turned to run back up the court — a sign that the Blue Devils were completely at ease and rolling with a confident strut.

The Aztecs were trying to reach the Sweet 16 for the third time under Fisher, but San Diego State — with a few players and coaches battling a stomach ailment — got off to a bad start and struggled to slow Duke early.

They made their best push to close a 37-24 halftime deficit to 44-37 on a 3-pointer from Malik Pope with 12:42 left, then got the ball back with a chance to inch closer. But Trey Kell missed an open shot in the lane, and Duke pushed to Cook for a 3 — a crushing five-point swing and the start of an 11-0 run that killed San Diego State’s chance to get back in it.

San Diego State had shot an unusually high 22 3-pointers in Friday’s win against St. John’s, making nine. The Aztecs went 2 for 13 from behind the arc Sunday.

“They did a great job denying and pressuring the guards so that it was hard to make certain reads,” senior Dwayne Polee II said. “That’s a credit to their defense. And open ones we did get, we weren’t able to knock down.”

The matchup was the first between Krzyzewski and Fisher in the NCAA Tournament since the 1992 title game.

Krzyzewski’s Blue Devils — featuring Christian Laettner, Bobby Hurley and Grant Hill — won that one 71-51 against Fisher’s Michigan team led by the “Fab Five” freshmen. The nearly 23-year gap was the longest between tournament meetings for head coaches in NCAA history, according to STATS.

Duke: will play Utah on Friday.