Why ‘Race Together’? Why not? 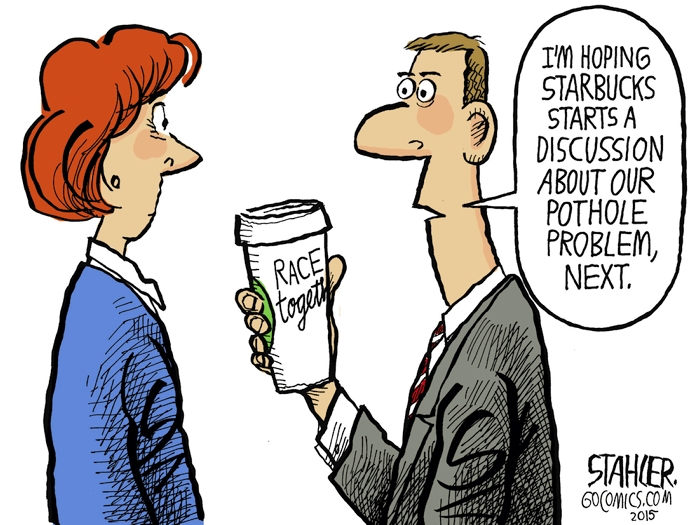 A lot of eyebrows shot up last week when Starbucks announced that baristas at 12,000 Starbucks locations in the United States were trying to spark conversations about race.

They hoped that writing two words on customers’ cups — “Race Together” — would lead to serious discussions about diversity right there in the coffee shops. At first blush, many people wondered whether this was good business. More plainly, was Starbucks crazy?

Why would any American corporation purposely set out to encourage its employees to foster conversations about the country’s most divisive topic — race? Was it trying to drive customers away in droves?

But just a superficial investigation into this “Race Together” campaign reveals two companies — Starbucks and USA Today — committed to having racial issues confronted as a nation.

“Racial diversity is the story of America, our triumphs as well as our faults,” said a joint statement from Starbucks Chief Executive Officer Howard Schultz and USA Today President and Publisher Larry Kramer.

“Yet racial inequality is not a topic we readily discuss. It’s time to start.”

In addition to what baristas at Starbucks were doing, USA Today published last Friday an eight-page supplement and conversation guide that included “conversation starters” on race relations. An interactive version of the “Race Together” special edition also is available online at racetogether,usatoday.com.

It’s worth a visit. You might learn your beliefs and assumptions about race in the United States are way off base. Did you know more white children than black children are living in single-parent homes? Do you realize that 93 percent of the growth in the United States’ working-age population between now and 2050 will come from immigrants and their U.S.-born children?

Did you know that black- and Latino-owned business are dramatically on the rise, or that the Asian population in this country is growing at a faster rate than the Latino population?

Schultz believes conversations, such as the ones that occur in coffee shops every day, have the power to change hearts and minds. His company actually called its employees together to talk about race and to offer their ideas on moving the country forward.

“Each voice offered insight into the divisive role unconscious bias plays in our society and the role empathy can play to bridge those divides,” Schultz said. “… Our nation is only becoming more diverse. To ignore, dismiss or fail to productively engage our differences is to stifle our collective potential.”

In Rowan County, as with every other place in this country, we need to talk about things such as the lack of diversity on our governing boards and law enforcement rosters. We need to talk about the high minority populations in our prisons. We need to discuss serious immigration reform and finding pathways to citizenship for people risking their lives to come to the United States.

Should we really have to depend on coffee shop baristas to start this dialogue?

One of the conversation starters in the USA Today supplement on race included a fill-in-the-blank statement that said, “In the past year, I have been to the home of someone of a different race …. times.

What’s your answer? It might be something to discuss over coffee.