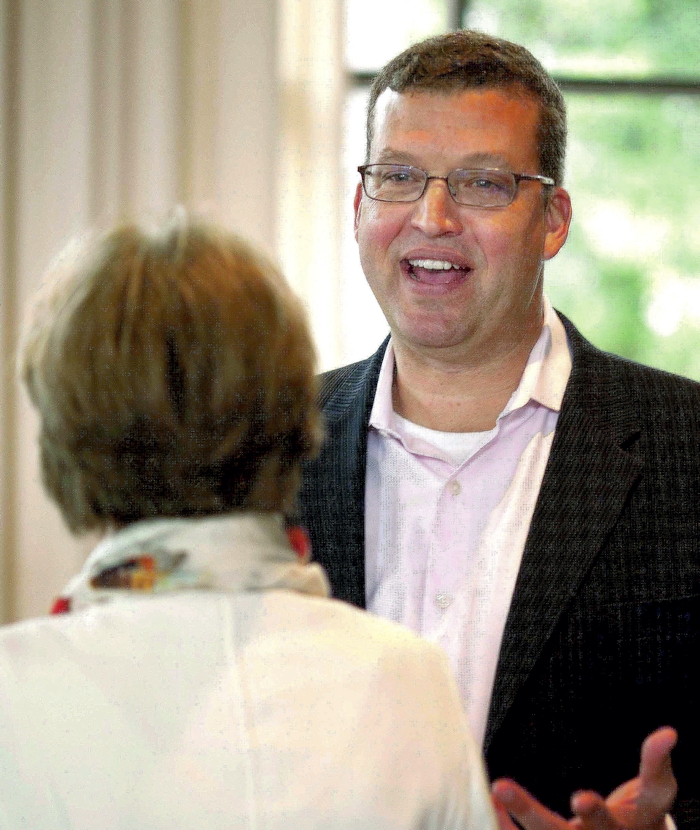 Having John Hart as the guest for the Brady Author’s Symposium made for a fun afternoon, since John is very comfortable talking and saw many people he already knew.

Beyond his lecture, he answered questions and then sat down for a writing Q&A with patrons and a few students.

“Writing is the only way to make a living out of pure imagination,”  he said. It’s lonesome work, and when John emerges from the basement mid-morning in his bathrobe after a few hours of writing, he doesn’t paint the picture of serious worker. “I wish my kids were here so they could see I have a job,” he joked to the audience.

“Reading and writing is the last intimate interpersonal relationship.”

Why be a writer? “You set yourself up to be shredded by critics … you expose your inner workings.” John gets questions about his dark books that amount to, “What’s WRONG with you?” He shrugs, “I’m a happy guy.” Dark is more interesting.

It boils down to this simple idea — “if it works, it’s the ultimate expression of freedom. … You can write whatever, whoever, wherever you want to.”

“I like to be on my own.” Twenty years ago, before his first book, he dreamed of being a writer with a farm near Charlottesville, Va., a beautiful part of the country, protected from development. Well, he is and he does. “It’s a great place for writers.”

Susan Shinn, a freelancer who writes for the Salisbury Post, asked John what it was like to “get into the mind of a woman.” John said “I was eager to see if I could do it.” He lives with three women, his wife and two daughters, but admits he doesn’t understand anything about them. He chose a woman who, like his men, is complex and damaged. “Well-grounded people are not that interesting in fiction.”

An author once advised, put all your characters in one room and set one on fire. “I like to do that.”

Kurt Corriher, a Catawba College professor and author, asked John about his experience with Hollywood, which optioned some of his novels. “They call it Lala-land for a reason,” John said. Anyone can derail a project at any time. John’s books have been in and out. Hillary Swank called him about “Iron House,” but nothing ever happened. Tim Hutton told him his characters were the best he’d read since “Ordinary People.” Another movie starring Hutton, “The Last Mimzy,” flopped, as did John’s movie deal.

A woman asked him about finding an agent. “An agent probably gets 5,000 letters and accepts 2 or 3 a year. You have to impress an agent. I get the sense among a lot of people who think, I can read, so I can write.” It ain’t necessarily so. “People say, I can do a Grisham novel, but they’re looking for a fresh voice that’s familiar, but a bit different.” John started with the “Writer’s Digest Guide to Literary Agents,” studying what genres which agents worked with and other details. “You have to do your homework, but you’ll get a lot of rejection, too.”

Barbara Setzer asked about people like Nora Roberts, who use a psuedonym to write other books, and turn out a book a year. “That’s tough,” John admitted, not something he wants to do.

What about a recurring character? John hasn’t met one he wants to revisit, except maybe Johnny Merrimon from “The Last Child.” He did leave “Iron House” open for any number of sequels, with lots of loose ends, but he’s not ready to do that.

How do publishers feel about the South? “New York publishers look down their noses at the South, yet they adore Southeran literature.” John said the South has a sense of place and continuity. “We’re proud of our crazy relatives … no story is not worth embellishing.” He’s discovered the Danes are fascinated by the South, and his books are bestsellers in Denmark. “The Danish translator is the only one who calls me,” John said. “I have no idea what my books are like in translation. I can’t read them. Who knows what they say?” His books have been translated into 32 languages and sell in 72 countries.

While he’s writing, John does not read other books. He finds himself using that author’s voice instead of his own. “I have a fear of reading,” he said. He loves Michael Chabon, whom he beat out for an Edgar Award. “I read ‘Kavalier and Clay’ and for two months, I couldn’t write. I felt so lowbrow.” He does read science fiction and historical fiction. In between books, he reads some of his literary friends’ work.

Kristy Woodson Harvey, a Salisbury native and daughter of Mayor Paul Woodson, will see her first book published in May. She and John have talked in the past and she asked him what publishers typically do for a first book.

“None of your work is any good unless people read it,” John said. “You have to use social media. I hate it. I hate tweeting. Facebook is better, but it’s essential to have your own social media accounts to promote your work.”

He told her to make friends in the media, and to ask for feature stories. “People read those more than book reviews. … Everybody you meet matters.”

John told a student that you cannot wait for inspiration to write. You put words on a page every day. “Nothing else matters but the words.”

John writes characters, who then determine the plot. About halfway through the book, he can pick out the killer, but sometimes he’s 60-70 percent through. By the time the book comes out, he has no interest in reading it. He recently read “The King of Lies,” his first book, while he was struggling with book five. “I was jealous of myself. Why can’t I do this now?” But he kept the faith and boosted his confidence and moved on.

“You have to find your voice, your message. It’s your choice. It takes desire and a lot of it. The world is full of doubters.”

When his second child was on the way, he realized he could not be a lawyer, father and writer. So he quit his day job and did so publicly so people could push him. “People will try to dissuade you because they gave up. You’ve got to have rock solid faith in yourself.”