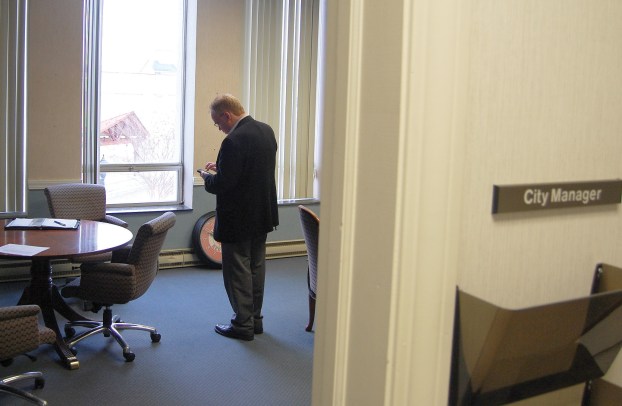 Lane Bailey, Salisbury's new city manager, checks his cell phone in his office in City Hall in Lenoir. He was the manager in Lenoir for nearly 11 years before coming to Salisbury.

New city manager: Salisbury a good fit for me

The new man in charge of running Salisbury has the respect of his peers and a track record of getting things done.

Lane Bailey’s first day on the job for the city is Monday. He brings over 25 years of experience, including 22 years as a manager.

Salisbury has been without a full-time manager since June when former city manager Doug Paris abruptly resigned. Assistant City Manager John Sofley has been acting as interim city manager.

Before taking the job in Salisbury, Bailey managed the city of Lenoir, in Caldwell County in the foothills of the Blue Ridge Mountains and with a population around 18,000, for nearly 11 years. In his time at Lenoir, Bailey worked to improve the city’s parks and recreation, bring new life to the downtown area and was part of a team of officials who recruited Google to build a data center in the city.

He also helped the city transition from its historical economy of furniture manufacturing to a modern one that includes technology and pharmaceuticals.

His office in Lenoir City Hall was nearly empty Thursday morning when Bailey spoke with the Post about his career and his move to Salisbury.

“You’ve got to have an elected board that will allow a manager and staff to do their job,” he said about what it takes for a city’s staff to be successful.

He said his philosophy is to surround himself with good people, empower them and let them do their jobs.

“You’re only as good as the people you have working for you,” he said, adding he doesn’t micromanage his department heads.

He said his staff, and his relationship with city council, in Lenoir was great and that it was a very tough decision to leave.

Bailey is familiar with Salisbury. He replicated the city’s customer-service program, started under former city manager David Treme, in Lenoir.

While starting the program in Lenoir, Bailey said he was impressed with Salisbury city employees he met and worked with.

He said he thinks he can be successful here, and that Salisbury’s reputation around the state was also a factor in his decision to apply for the job.

Bailey and his wife, Ruth, have two children, Brennan and Katherine — who are currently in middle school. Eventually, the entire family will move to Salisbury, and Bailey said his children will attend the city’s public schools.

He said the most important things in his life are his faith, family and work.

Bailey, 51, grew up in Bryson City in the western part of the state and earned his undergraduate degree at Appalachian State. He was planning on going into law, but after visiting a friend who was interning in local government, he found himself intrigued by the line of work. He decided to take a different track and ended up earning a master’s degree in public administration from Appalachian State.

“No regrets,” Bailey said about his career.

He started out as a budget analyst in Gaston County before becoming assistant county Manager in Polk County, where he would become county manager in 1993 at the age of 28 — the youngest county manager in the state at the time.

He spent seven years in that position before becoming city manager in King, a small community north of Winston-Salem, in 2000.

His time as a county manager played a role in his hiring in Salisbury. City Council is working to rebuild its relationship with the county, and Bailey’s knowledge of how county government works was seen as a plus.

Bailey said he understands the difficulties involved with county management — adding he plans to have a strong working relationship with Rowan County Manager Aaron Church.

Current Caldwell County Manager Stan Kiser said Bailey is knowledgeable in all areas of local government. He said their working relationship over the last five-and-a-half years since he became county manager has been professional.

“Lane is of the highest character,” Kiser said.

He said Bailey’s experience as a county manager allows him to see both sides of the issue when dealing with the county. He added the county and the city were able to work together on successful economic-development initiatives during Bailey’s tenure.

Bailey, whose starting salary will be $150,000  said one of the first things he will do in Salisbury is meet one-on-one with City Council members to learn about them and their goals for Salisbury.

Lenoir Mayor Joe Gibbons joined the city’s council in 2005 after Bailey was hired in 2004. Gibbons became mayor in 2011.

He said Bailey is a “gentleman” and a great friend.

Gibbons said Bailey was a great leader during the city’s and county’s recruitment of Google — which in 2013 announced a $600 million expansion of its facility.

Google has partnered with the city on other initiatives, such as installing Wi-Fi in the downtown area.

Bailey’s work on the Google project was another thing that caught Salisbury City Council’s attention. His experience with a tech company like Google will be an asset in recruiting technology companies to Salisbury, council members said.

Gibbons also praised Bailey for helping to get Lenoir named an “All-America City” in 2008 by the National Civic League.

Rohr, a Libertarian who often votes against the majority on the council, said Bailey would give his advice on issues to council and then let them decide — and he didn’t take it personally if council went in a different direction.

“Ethical” and “honest” is how Rohr described Bailey.

He said the city was a in tough spot economically when Bailey was hired — a lot of furniture jobs had been lost — but is now in a very strong position.

Driving around Lenoir, Bailey points out some of the projects he worked on. One of those is Unity Park, a community garden built on land where an old furniture factory once stood before a fire destroyed it.

The park has 75 raised garden beds, rows of fruit trees and a walking path. Bailey said it has become very popular in the city and is an educational resource for schools.

The site “has gone from the biggest eyesore in Lenoir to a place of pride,” he said.

Bailey considers parks and recreation an economic-development resource. During his time in Lenoir, a greenway was built that travels through the city, connecting various parts of the community. Plans call for the greenway to continue expanding.

The town’s aquatic center, which before Bailey’s hiring was basically an indoor and outdoor pool facility, now resembles more of a water park. Parks and Recreation Director Rob Winkler said the facility is extremely popular.

Bailey credited the town’s improvements on hard work and innovation by city staff.

Lenoir still has problems to deal with. Vacant homes, as in Salisbury, are a problem. Bailey said the city tore down 14 homes last year and foreclosed on some of the properties in an effort to sell them to owners who will develop the land.

Lenoir has a historical downtown the city is working to revive. Bailey said they’ve modeled their efforts after Salisbury’s. Though there is still a lot of work to do in downtown Lenoir, Bailey pointed to a new office building built by the city’s hospital, UNC Caldwell Memorial, on land next to a giant sculpture.

The hospital liked the sculpture, a huge wheel made of earth, so much, they decided to put the office building next to it, Bailey said.

Bailey said he will make changes to how things are run in Salisbury, but added he’s not sure what those changes will be and that he will spend time learning how the city functions before implementing any of his ideas.

Asked what it takes for a city as a whole to be successful, Bailey said there needs to be a “sense of community pride” from residents as well as city officials.

He said he sees that sense of pride in Salisbury.

Editor’s note: This story has been updated to show that Porky’s II in Landis is no longer open.  By David Purtell... read more