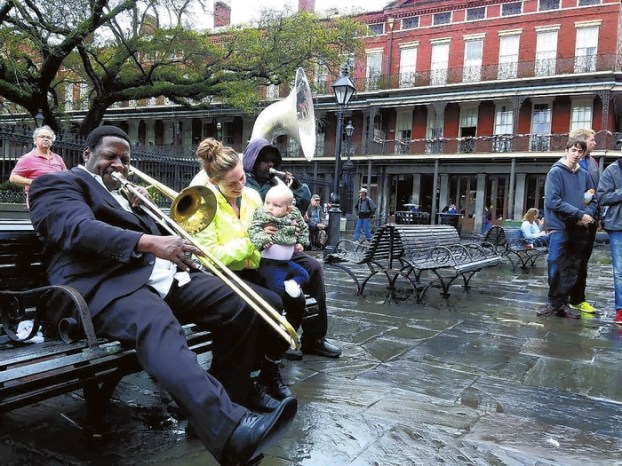 A trombonist plays 'When the Saints Go Marching In' in the heart of the French Quarter of New Orleans. In the backdrop are Jackson Square and some of the oldest apartments in the country — the Pontalba buildings. Elizabeth Roy/For the Salisbury Post

Music, ghosts and food: Living for today in New Orleans

Recipe courtesy of The New Orleans School of Cooking

1 chicken, cut up or de-boned

Season and brown chicken in oil (lard, bacon drippings) over medium heat. Add sausage to pot and saute with chicken. Remove both from pot.

Make a roux with equal parts of oil (must be free of food particles to avoid burning) and flour to desired color. Add onions, celery, and green pepper. Add garlic to the mixture and stir continuously. After vegetables reach desired tenderness, return chicken and sausage to pot and cook with vegetables, continuing to stir frequently. Gradually stir in liquid and bring to a boil. Reduce heat to simmer and cook for an hour or more. Season to taste with Joe’s Stuff seasoning.

* File’ is a fine green powder of young dried ground sassafras leaves, used in gumbo for flavor and thickening. It may be placed on the table for individuals to add to their gumbo if they wish. ¼ to ½ tsp. per serving is recommended.

It’s a warm Saturday night on Frenchmen Street in New Orleans. In a city that oozes good music – it’s literally everywhere you turn – this is where the locals go for jazz. Inside The Spotted Cat Music Club, trombone and trumpet players improvise off of one another while the bass jams his low, soulful notes.

From the tight-packed crowd – it’s standing room only – a normal-looking, young guy in a bowler hat presses his way to the foot of the stage and starts tap dancing, stomping and swishing the beat on the worn wooden floor. The crowd, wanting more, squeezes in on itself to make room for the tap dancer. The dancer and musicians exchange looks and subtle nods of approval, jamming on. They, like all of us onlookers swaying to the music, are doing what people in the Crescent City do best.

My husband, T.J., and I first began to really understand the people and culture of New Orleans while eating brunch at Muriel’s restaurant off of Jackson Square in the French Quarter. We were in New Orleans on a long-overdue “adults only” getaway inspired by an airplane voucher that had been about to expire, and this was our first full day in the city.

As he served us our goat cheese crepes topped with Louisiana crawfish in a buttery sauce of goodness, Muriel’s waiter Scott Pardo explained his people and town.

“What makes New Orleans unique is that we have such a passion for so many different things – hospitality, food, drinking,” Scott says. “It’s all about having a good time and living for today.” When you grow up in New Orleans, appreciation for these things is instilled in you, Scott says. The music, the history, there’s just so much to the city.

And he’s right. New Orleans is a walking city, so much so that on our most adventurous day, T.J. and I figured we walked upwards of eight miles. On our walks and stops we witnessed the city’s incredible architecture – ornately trimmed and vibrantly colorful creole cottages and historic townhouses dating as far back as the 1700s – and artists, musicians, and street performers of all talents. The long-reaching history of the city meets with young passion to create a place that is so rich, and such a wildly good time.

“People enjoy their lives here. That’s the whole point,” says Joanne Sealy, New Orleans transplant and Faulkner House Books manager who moved to New Orleans with her mother the first chance she got.

And what could be more fun than eating your way through the Crescent City? New Orleans is a food lover’s Mecca, especially if you love seafood and intensely dynamic flavor. Oysters on the half shell and crawfish – eat the tender tails then suck the juice out of the head, if you’re so bold – are staples, as are the Cajun classics like jambalaya, gumbo, and red beans and rice.

At a cooking class at the New Orleans School of Cooking on St. Louis Street, just a short walk from where the Mississippi borders the French Quarter, instructor Michael DeVidts teaches Cajun cooking and history in one.

After the French Acadians fled to Louisiana from Canada, their cooking methods melded with the Spanish, Portuguese and Africans living in the region, Michael explained.

The result is a rustic, country style of cooking that worships flavor, local ingredients and simplicity, and above all, “the Trinity”: onion, peppers, and celery. Add in garlic (considered the “Pope” of Cajun) and you’ve got yourself “the Holy Trinity.” And the flavor that results? Heavenly.

At pretty much every meal we ate in New Orleans, “heavenly” was the only word I could utter after the first mouthful. Whether we indulged at a casual brunch spot like The Ruby Slipper on Canal Street where I was served Eggs Coubion – thin-fried catfish with poached eggs and a Creole tomato courtbouillon – or at a higher-end spot like Peche in the Warehouse District where we ate steak tartar on an oyster aioli crostini and a whole red snapper in a miso chili vinaigrette, New Orleans eating was consistently incredible.

Further enhancing the experience, so many restaurants – like most of the structures in New Orleans – have a story. Peche, with its airy modern warehouse feel and rough-hewn beams, was long ago an embalming facility, then later a coffee roasting plant. And Muriel’s – a luxurious, fine dining establishment in a Jackson Square building dating back to the mid-1700s – is believed to be haunted by several ghosts including Pierre Antoine Lepardi Jourdan. Every night a table is set for Jourdan with bread and wine – after all, happy ghosts make for a happy and smoothly running restaurant.

While so much of New Orleans’ history is vibrant and celebratory – take the brilliant Voodoo priestess and free woman of color Marie Laveau, for example – New Orleans has enough tales of ghosts and despair, of yellow fever epidemics, and of its dark and tortuous slave trade past, to fill a lifetime.

“You gotta live with the dead in New Orleans,” says guide Skip Guidry on a Voodoo tour of the French Quarter. “Once you see through, you can’t un-see.”

And whether or not you choose to tour the residential wards that were submerged in as much as 26 feet of water just under 10 years ago, there is one more story of sadness and rebirth in the Crescent City that visitors will encounter. The homeless, sleeping on the banks of the Mississippi and tucked in the alcoves of businesses downtown, are a perpetual reminder of Hurricane Katrina’s continued impact on the people of New Orleans.

Even just a few days into our visit, the faces on our favorite walking routes became familiar: the musicians, fellow tourists, and the French Quarter merchants. New Orleans draws you in with its friendliness.

One such new friend, Devon Taylor, a 25-year-old sousaphone player in the Young Fellaz Brass Band, summed the city up perfectly on a Thursday morning in Jackson Square. As we talked, a trombonist played “When the Saints Go Marching In” in the background. Across Decatur Street from where we stood, a line of hungry people awaiting their cafe au lait and beignets at Cafe Du Monde snaked down the block.

“If you’re looking for something authentic, it doesn’t get any more real than this,” Devon says.

Many people come to New Orleans for Bourbon Street, and there’s fun to be had there. I’ll admit that the lights, dueling pianos and hurricanes on the strip swallowed us up on our first night in the city. But step off of Bourbon, and you’ll discover that New Orleans is pulsing with music and culture, and built on a history that is fascinating and soulful.

If you’re looking for authentic, looking for something real, and you’re ready to live for today, then NOLA will never disappoint.

Unusually warm weather earlier this week had many asking various questions about their lawns and landscapes. Retail garden and farm... read more