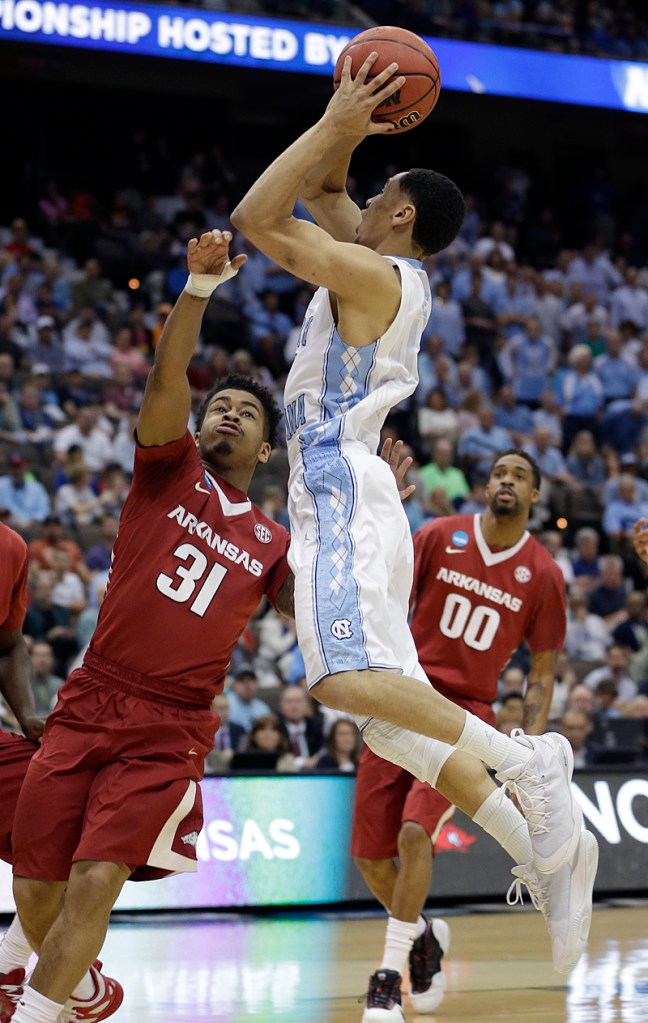 The Associated Press North Carolina guard Marcus Paige (5) shoots over Arkansas guard Anton Beard (31) during the first half of the Tar Heels' 87-78 win in the third round of the NCAA Tournament.

JACKSONVILLE, Fla. (AP) — Marcus Paige scored 22 points, including 20 in the second half, and North Carolina beat Arkansas 87-78 in the NCAA Tournament on Saturday to advance to the Sweet 16 for the first time in three years.

Paige missed seven of eight shots in the first half, including all three from 3-point range, and was pretty much a non-factor as the Tar Heels let the Razorbacks keep things close.

But the junior guard took over in the second half, scoring 13 of his team’s 17 points during a 5-minute stretch that helped North Carolina build a double-digit lead. The Tar Heels held on from there, thanks partly to Paige closing things out from the free-throw line and with his ball-handling skills.

UNC advanced to play either No. 1 seed Wisconsin or eighth-seeded Oregon in the West Regional next week in Los Angeles. It will be Carolina’s 26th appearance in the Sweet 16.

This one was no given for UNC, especially after it eked out a victory against Harvard in their opener. The Tar Heels turned the ball over 17 times against the Crimson and knew that kind of performance against the pressing, trapping Razorbacks could mean a third consecutive early exit from the tournament.

The Tar Heels responded with a relatively clean game. They turned it over just six times in the first half and 16 total. They broke the press early, getting easy shots in transition and at the rim.

The only thing that slowed down UNC was foul trouble.

Kennedy Meeks picked up his fourth foul early in the second half, limiting Carolina’s inside game.

Paige picked up the slack. After Arkansas took a 59-58 lead on Jabril Durham’s 3-pointer from the corner, Paige drove by three defenders and got fouled as he made a circus shot. He capped the three-point play and then added consecutive treys a few minutes later that proved to be daggers.

Freshman Justin Jackson, who hit the game-winning shot against Harvard, came up big again down the stretch.

Jackson scored six consecutive points — he made two layups and hit two free throws — that prevented the Hogs from making a comeback.

Qualls and Portis, much like they have been all season, were quite the two-man show for Arkansas.

Portis had his fourth double-double in the last six games, but made just 5 of 15 shots from the floor. Qualls was his usually explosive self, getting most of his points in transition and on dunks and layups.

But the Razorbacks had too many turnovers (21) and allowed too many points in the paint (40) to pull off the upset.

North Carolina: Coach Roy Williams improved to 32-8 in the NCAA Tournament with his alma mater, tying late and legendary coach Dean Smith for the program’s most wins in the tourney. … Williams also notched his 750th career win, becoming the 15th coach in Division I history to accomplish the feat.