Authors and readers have a good time at Rowan Reading Rendezvous 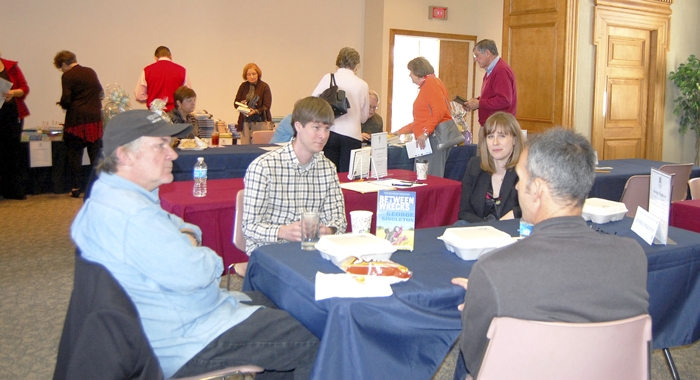 The second annual Rowan Reading Rendezvous was a bestseller.

Organizers said more people came and more books were sold than last year. Late in the afternoon, more than 200 books had been sold, with profits going to Friends of Rowan Public Library.

Deal Safrit, who again lined up the authors, was excited, happy and tired by the time he left the library. “That was great,” he said, looking pleased.

Authors seemed happy, too, as much for the chance to visit with each other and talk shop as seeing fans. But there were fans, a good number, including young Megan Phillips, who came at the very last minute and happened to meet Jennifer Hubbard. Megan’s mother, Tracy, encouraged her to ask questions. “I’d like to write teen books,” Megan said quietly, and she and Hubbard, along with Kim Church, author of “Byrd,” gave her tips on what to do to become a writer.

“Spend  lot of time in the library,” Hubbard said. “Go to writing workshops.”

Church mentioned the writing program at Duke University for younger students. She also advised Megan to keep a journal.

Authors were happy to talk with the people who stopped by their tables.

A few authors also had about 45 minutes each to talk about their work, starting with Anna Jean Mayhew, who told of her desire to expose and eradicate racism. She is the author of “The Dry Grass of August.”

Bob Inman talked about his book, “The Governor’s Lady,” and about politicians. “It’s all about personality, especially the more local it becomes,” he said. And it’s about power.

Dot Jackson, author of “Refuge,” a family story disguised by fiction, told the audience about her years-long wait to present her book. She talked about the rejection she got from publishers because they couldn’t believe her mountain characters were that smart, another form of prejudice. She said author John Ely paved the way for more Southern authors to write with Southern voices.

Charlie Lovett, author of the bestseller, “The Bookman’s Tale,” said, as the son of an English professor at Wake Forest University, he grew up loving libraries and books. He writes about antiquarian books and the mystery and subterfuge that accompany them, real and imagined.

The no fuss, down-to-earth writer George Singleton, who once scared Catawba College professor Forrest Anderson as Anderson’s teacher, read from one of his latest short stories. He may talk like your neighbor Bubba but he has craft and he’s tough on himself and other writers.

Kim Church’s book, “Byrd,” has earned quite a bit of praise. She first read from an interview she had with herself, pretending Terry Gross was asking the questions, then read from the book and answered questions. It features a woman who gives up her son for adoption.

Best-selling author Jason Mott gave the final talk of the day with his usual self-deprecating humor. He’s happy to answer questions and talk about his writing schedule. For him, writing is his job. His most recent work is  “The Wonder of All Things,” and he’s working on his next book.

Also at the Rendezvous was Rose Senehi, who was excited about writing a screenplay of “Dancing on Rocks,” her most recent book. She’s shopping it around and has some interest. She finds it works better to have a script, but admits it’s a totally different way of writing.

Mystery writer Mark de Castrique was happy to be back in Salisbury and glad to see the other authors there. He brought along all his published books.

Michael Parker signed “The Watery Part of the World” and “All I Have in This World” and a book of short stories, “Don’t Make Me Stop Now.” He spent time talking with Singleton, author Jon Sealy and Holly Goddard Jones, author of “The Next Time You See Me,” a book chosen for a past Summer Reading Challenge.

Sarah Creech signed “Seasons of Dragonflies” and made time to hear a couple of the other authors speak.

With copies of “The Whiskey Baron,” Jon Sealy was there, along with Michel Stone, whose debut novel is “The Iguana Tree.”

Dale Basinger is president of the Friends, and Margaret introduced several authors.

The warm weather may have kept some people outside, but plenty of readers came to meet new authors and their favorites and were happy about what they found. They were all fans of the printed word.

For more insights on the authors, read upcoming editions of the Book page in Sunday’s Post.