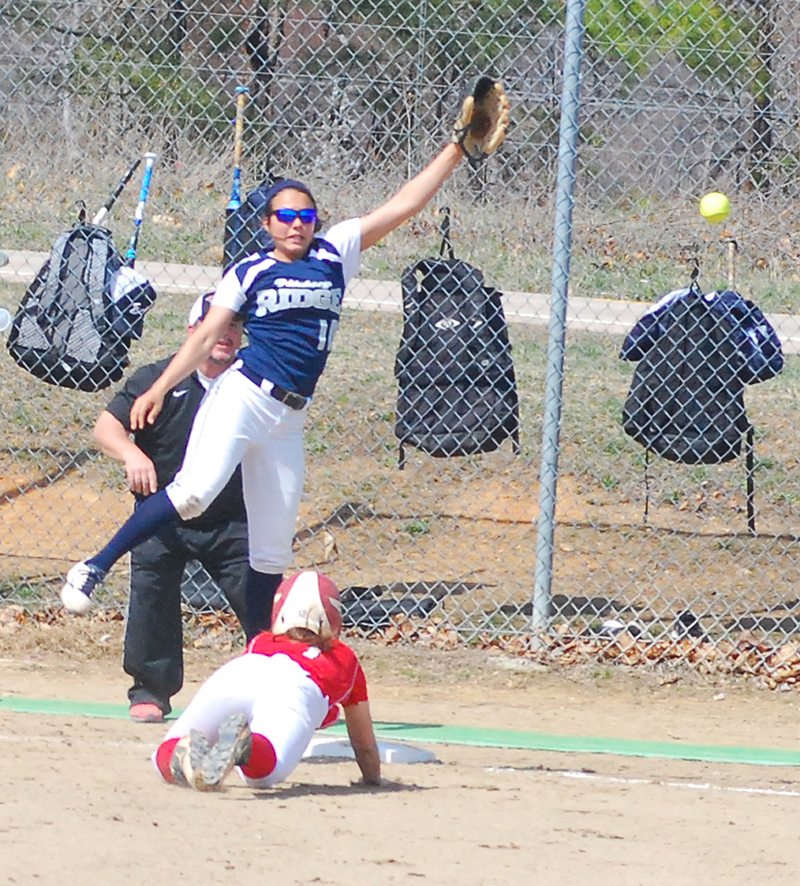 LANDIS — As the halfway point nears in the South Piedmont Conference softball race, South Rowan has figured out how to start — but not how to finish.

South Rowan led 5-0 against visiting Hickory Ridge in a Saturday afternoon South Piedmont Conference makeup contest. The Raiders were up 5-0 through the first three innings, but they lost 8-5.

“We’ve been getting the bats started early, but then it fades away,” said South Rowan center fielder and Catawba signee Beth Ann Martin. “We’ve been in every single game, but we’ve got to figure out how to hit for a whole game.”

The Raiders fell to 2-5 in the SPC and plunged into eighth place in the nine-team league.

To South Rowan coach Hunter Fuller, his team’s latest loss resembled the four that came before it. There was a 2-0 loss to Northwest Cabarrus, a 6-4 loss to league-leading West Rowan, a 2-1 loss to second-place Carson and a 6-5 loss to Central Cabarrus prior to Saturday’s setback.

“Today actually was the most runs we’ve lost by,” Fuller said. “We’ve swung the bats early, but then we’ve gotten complacent. I’m still trying to be Mr. Positive. I keep believing it will turn our way.”

It was all South Rowan early. Martin punched a two-run, opposite-field double down the left-field line for a quick lead and pitcher Sammi Kennerly hammered a two-run double to the gap to make it 4-0 before Hickory Ridge hurler Breezy Yelton could get through the first inning.

After Autumn McKeon’s triple to right chased home Caroline Hubbard in the second, the Raiders led 5-0.

Hickory Ridge (3-3, 3-2 SPC) was frustrated early by Kennerly. She struck out two with the bases loaded to escape a mess in the second. Hickory Ridge lashed two wicked liners right to right fielder Makayla Strickland and Martin in centerfield and stranded three more in the third.

“I thought maybe we were living right,” Fuller said.

But then Hickory Ridge tied it with a five-run fourth. A walk, a sacrifice bunt, three singles, three errors and a defensive miscommunication did the damage. Malaya Black’s two-run single to right was the biggest blow.

“We left the bases loaded twice, hit some balls at them, but I was pleased that we stayed with it,” Hickory Ridge coach Patrick Helm said. “Our catcher (Kaitlyn Macon) did a great job of keeping everyone’s spirits up, and when South made mistakes, we capitalized.”

South Rowan left the bases loaded in the fifth, and Hickory Ridge settled it with three runs in the sixth. Macon’s single scored the go-ahead run. Two more trotted home on a wild pitch and Kayla Bossart’s sacrifice fly on a diving catch by Martin.

The Raiders had one final chance, loading the bases with one out in the seventh on two walks and an error, but the Ragin’ Bulls held on.

“Everyone’s trying to get their teams to jell with the benefit of only a handful of practice days,” Helm said. “There’s a lot of parity in our league. There’s going to be a lot of tight games like this.”