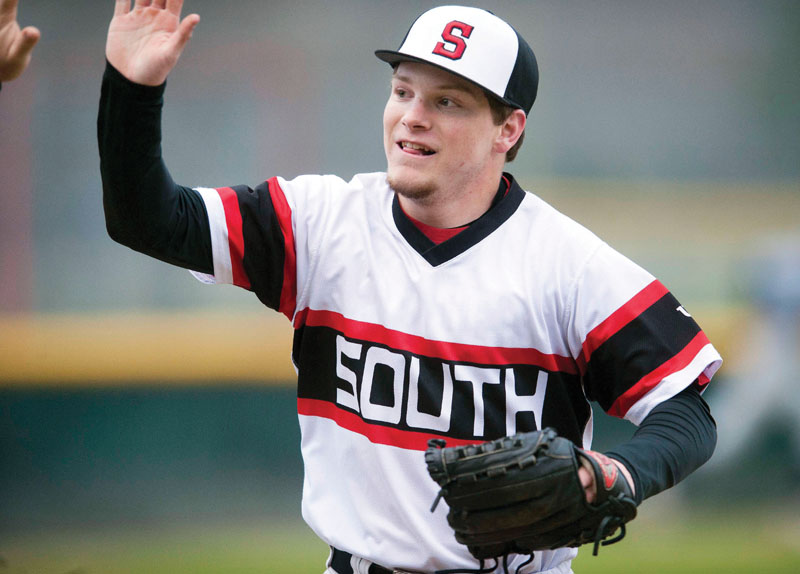 LANDIS —  If  you’re wondering why South Rowan is in first place in the South Piedmont Conference or why the Raiders have won 70 percent of their games the last four seasons (65-28), the formula is simple.

The Raiders don’t beat themselves with walks and errors, and they came out on top again Friday, taking care of visiting Hickory Ridge 4-2. South Rowan’s offense wasn’t exciting — six singles and a double — but it was enough.

South Rowan hurlers issued two walks while South Rowan defenders put another zero in the error column. That was the difference.

Keys to victory were shortstop Peyton Penninger and second baseman Chandler Corriher, who gobbled groundballs, and pitchers Bo Corriher and Dillon Norton, who threw pitches that produced groundouts. Give an assist to catcher Shaggy Wyatt for a solid job behind the plate.

Bo Corriher pitched into the sixth inning for the win. Norton, a calm sophomore lefty, got the last five outs for a save.

“Our starters are doing a good job of going as hard as they can and then trusting the next guy,” Chrismon said. “That’s the best job Bo has done as far as attacking the hitters.”

The top of the third was big for Bo Corriher. The Ragin’ Bulls had runners at second and third with one out, but Corriher struck out the No. 2 and No. 3 hitters to protect that 1-0 lead.

“I kept it down, hit my spots,” Bo Corriher said. “My curveball was working pretty good.”

The bottom of the lineup scratched two runs for South Rowan in the  third. A walk preceded Wyatt’s groundball to the mound that resulted in a disastrous, three-base throwing error. Then No. 9 hitter Tyler Rary punched a single to make it 3-0.

Hickory Ridge (3-4, 2-4) filled the bases against a tiring Bo Corriher with one out in the sixth, but Chrismon called on Norton.

Norton got a groundball for a force out at the plate, but then Chase Garofolo rapped a sharp, two-run single to left. The Ragin’ Bulls had the tying and go-ahead runs on base, but Norton maintained the 3-2 lead by getting a routine groundball to Chandler Corriher.

South Rowan picked up an insurance run in the bottom of the sixth on two errors, a bunt and a wild pitch.

Then it was up to Norton in the seventh. He quickly put away the visitors 1-2-3.

“The seventh was easier than the sixth because I had my feet wet,” Norton said. “I just tried to make my pitches and not let them get anything big.”