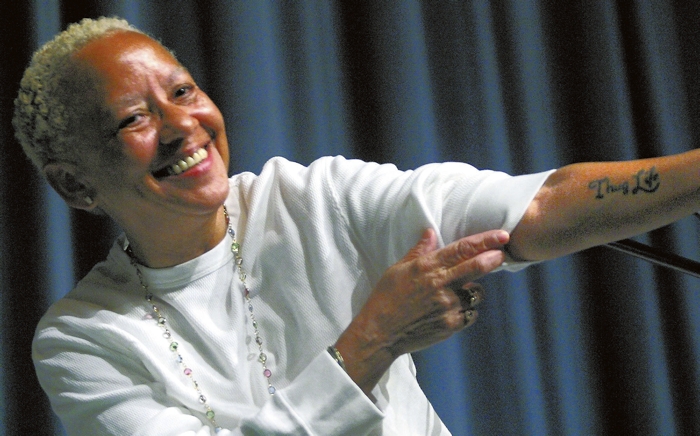 I couldn’t turn down a chance to interview poet Nikki Giovanni, who was in town to address a writers’ conference last weekend.

In the ’70s, when I was in college, she was considered the poet laureate of black America. Now she’s a professor at Virginia Tech, where eight years ago a homicidal student — a young man who had taken her creative writing class — shot 30 people to death in a campus rampage.

The timing seemed perfect, given what’s going on around the country: gun-laced, race-based protests in Ferguson, Mo., and vile expressions of bigotry by college students in Oklahoma.

I figured we’d talk about race and youth and violence. Instead we talked about sea turtles and space travel.

Those, it turns out, are Giovanni’s passions.

For years she’s been traveling to Zihuatanejo, on the Mexican coast, to join volunteers protecting baby sea turtles as they hatch on the sand and make their way into the ocean.

She would love to travel to the moon and beyond, if NASA would accept a 73-year-old woman who — because of a bout with lung cancer 20 years ago — is missing two ribs and half of a lung.

I confess to a bit of disappointment. I was looking for worldly wisdom and writerly advice. Instead she chattered on about the vulnerability of tiny turtles and the science of weightlessness.

She punctuated some stories with laughter; others were stalled by tears. And by the time our visit in Pasadena ended, I realized that I had indeed gleaned a lesson that every writer needs.

“I’m not a guru. I don’t have the answers,” Giovanni told me as I asked for the umpteenth time about guidance for young writers. “Just trust your own voice. And keep exploring the things that are interesting to you.

That advice may seem overly simple, even maddeningly generic. But it’s at the core of what has made Giovanni’s work so accessible.

Just as I’d expected to pick the brain of a scholar, the women were hoping for some sort of road map, a way to make writing satisfy and pay off. Instead they got a kind of sisterly chat: “Don’t push yourself. Let it flow. Don’t defeat yourself by believing you can’t.”

For some, tired of nit-picking classmates and blood-letting critiques, that message provided much-needed relief. So did Giovanni’s admission that she’s relied not just on talent, but on a great memory and good luck.

“Her humility and honesty were refreshing,” said Raquelle Mayoral, 28, who is working as a substitute teacher while she studies for a master of fine arts degree in creative writing and poetry. “I went in with no expectations of who she was supposed to be. I just knew that it was an honor to be in her presence.”

For some — like the young woman who teared up at the mike during the question-and-answer period — that honor was overwhelming. She had decided to pursue writing after she read Giovanni’s poetry in eighth grade.

“You don’t know how special it is that I can tell you this in person,” the young woman said.

I knew exactly what she meant, because I was feeling that way too.

Her poems were my security blanket when I felt misunderstood. In college, I’d taped them to my dorm room wall. When I became a mother, I read them to my daughters.

Giovanni wrote about rituals that were so familiar to me: making biscuits with Grandma, reading when you know you’re supposed to be doing chores, sweating out your bangs during a slow dance on a hot night with a boy you liked.

She’d been my guide through so many confusing times in my life.

I still keep a dog-eared copy of her poetry collection “My House” in the nightstand next to my bed. It’s autographed now.

That was about the only thing I hadn’t bungled when I interviewed her.

I’d fumbled with my notebook, rummaged through my purse without finding a pen and forgotten to turn my tape recorder on before stammering through a complicated question about rioters in Ferguson and racists in Oklahoma and what exactly is up with young people today?

She flashed a broad smile, shrugged and asked: “How am I supposed to know?”

She kept smiling, and I stopped trying to impress the famous poet. I began to enjoy myself.

Giovanni is as good a storyteller as she is a poet. She shared her latest adventures, including suffering a seizure that landed her in the hospital and left her unconscious for two days.

The first things she asked for when she came to were a piece of paper and a pen.

I can’t wait to read the poem that spilled out of her then.

And I realized as I listened that writing isn’t about worrying over the perfect turn of phrase, it’s about having something to say.