Leonard Pitts Jr.: I’ve got your back, Ashley Judd 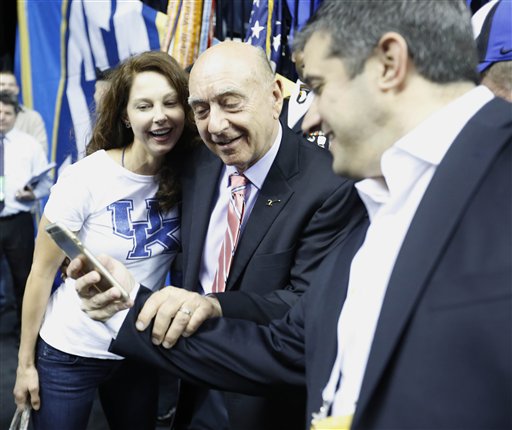 I guess this is a fan letter, though it is not written in praise of your work in movies like “Insurgent,” “Divergent” or “Tooth Fairy.” Rather, it’s in response to the headlines you made last week when you called out Internet trolls who defamed you as a “b—h,” a “whore,” and a “c—” and threatened you with rape after you tweeted an opinion about an SEC basketball tournament.

Specifically, you accused the University of Arkansas Razorbacks of playing dirty against your University of Kentucky Wildcats and suggested they kiss your team’s backside.

Not particularly polite, no, but not out of bounds, either. Male fans shout and tweet much worse about pretty much every sporting contest down to and including church league bowling. Indeed, male sports fans are the reason foam bricks were invented. Yet we are allowed to scream for the home team without being called vile names, much less threatened. So I was glad to see you use your Twitter account and media access to highlight this misogyny — and your intention to press charges.

I have to tell you, Ms. Judd, this hits close to home. Three times in the last year or so, I’ve had the difficult experience of learning that female colleagues had been threatened with rape because of something they wrote. I had not realized such things happened.

I mean, you get used to being called names when you write opinions for a living. It’s a rare day when I have not had my parentage, intelligence or cleanliness coarsely questioned a dozen times before lunch by some preliterate gasbag on the political right. But there is, it seems to me, a qualitative difference between that, unpleasant as it is, and the experience of being a woman on the receiving end of gender-specific insults and promises of sexual violence.

Women, in the aggregate, are smaller and physically weaker than men. I’ve always suspected that that comes with a sense of perpetual vulnerability, of constantly sniffing the air for potential danger, that men, being men, find difficult to appreciate. The threat of violence is harder for women to shrug off simply because, even on a good day, they feel so much more exposed to it.

As a human being — and specifically, as a man — I am appalled by what some sexually insecure troglodytes of my gender said to you over a basketball game. But this kind of thing is apparently not uncommon. Besides you and my colleagues, we’ve seen actresses Lena Dunham and Jennifer Love Hewitt and several women makers and critics of video games report being subjected to this sort of emotional terrorism. Former baseball star Curt Schilling recently got one man fired and another suspended from his job when they attacked his 17-year-old daughter online.

I’d love to see you do what he did, but take it a step further. Not simply identify the punks who made the threats, but hold a press conference on the sidewalk in front of their homes or in the lobby of their workplaces. Let them face microphones and cameras and explain themselves — to the world, and to the women in their lives. Give them an accountability moment.

Such a moment could be valuable for a generation in which technology has advanced simultaneously our ability to say and do despicable things and our ability to avoid taking responsibility for them. That’s a god-awful combination. We have inadvertently built a world full of dark hidey-holes of anonymity to shelter the droppings of our primitive lizard brains — and eroded simple decency and basic humanity in the process. It is a trend that needs to end.

So I write to thank you for the stand you’ve taken and to let you know there are those of us who value women and girls and think they deserve a safe place to be amazing. Please know that I’ve got your back.

That’s something else I say as a human being — but specifically, as a man.

Leonard Pitts Jr., winner of the 2004 Pulitzer Prize for commentary, is a columnist for the Miami Herald, 3511 N.W. 91 Avenue, Doral, Fla. 33172. Readers may write to him via email at lpitts@miamiherald.com.