Griddle me this: Kiwanis dole out pounds of pancakes during annual festival 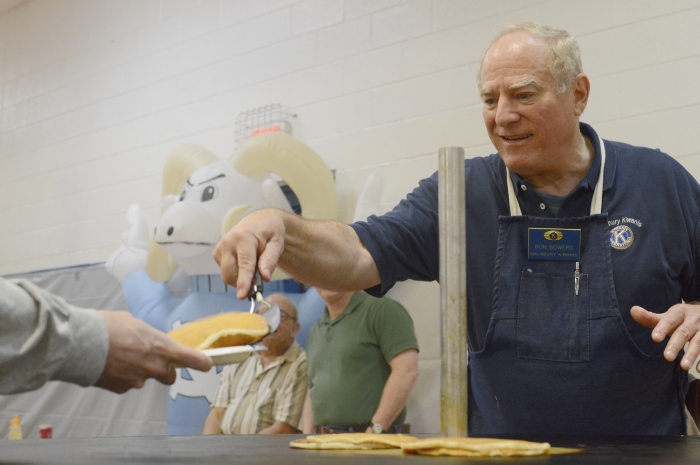 It’s all in the wrist flip.

This year after flipping dozens of flapjacks during the Kiwanis Club of Salisbury’s annual fundraiser, Kiwanis member Ron Bowers said an accurate, fast wrist is the most important factor in a perfect pancake.

“You’ve got to hit a moving target,” Bowers said as he moved around the circular cooking surface at club’s Pancake Festival. “A perfect pancake is all about the wrist action.”

A well-made pancake batter can also have a significant affect on the pancake’s quality, he said.

Bowers was one of several club members who served pancakes during a time of day never attempted by the Kiwanis in Salisbury before — lunch.

Kiwanis President Jerry Lawson said the new time was a result of the United Way annual Day of Caring event on Thursday, when the Rowan Rotary Club provided breakfast for volunteers. Instead of packing up and setting up a second time, Lawson said the Kiwanis left the equipment out, leading to the first ever Pancake Festival brunch.

“Some of the other Kiwanis Clubs that do Pancake Festivals run a full day program, so they also run a noon program,” he said. “It was an opportunity that just fell in our lap, an opportunity to do lunch and we’ll see how it goes.”

The Pancake Festival is the Kiwanis Club’s annual fundraiser, which supports three local high school Key Clubs and several other charity organizations. Some of the other organizations include: Rowan County Safe Kids, literacy projects at two elementary schools and the annual Farm City Celebration.

“If we don’t develop the youth then we are going to be in trouble as a county,” Lawson said. “If we don’t do things to make our youth stronger mentally, we’ll go downhill.”

In preparation for this year’s event, the Kiwanis purchased 600 pounds of sausage and about 750 pounds of pancake mix. The club distributed 4,000 tickets before the event and set aside 1,000 for purchase at the door.

The Kiwanis organization was founded 100 years ago in Detroit. It’s open to men and women and meets at noon Fridays at the Salisbury Country Club. Guests are welcome.