Ecclesia Church: “On fire for God and led by the Holy Spirit” 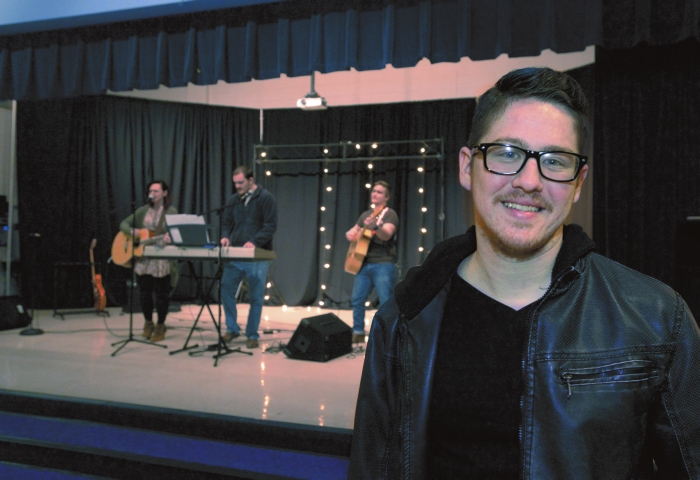 Pastor Josh Venron on the right in front of Devin Smith, Ashely Rae and Chase Wilhite doing a sound check at a new church named "Ecclesia Church" that meets at Koontz Elementary. photo by Wayne Hinshaw, for the Salisbury Post

It’s Saturday morning, and crews have once again set up folding chairs in the gym. The band is warming up onstage, while others are making adjustments to the video screen off to the left.

The next morning, they’ll have church.

Welcome to Ecclesia Church, which launched on Feb. 8. Members meet each Sunday in the gym of Koontz Elementary School. If you’re thinking it doesn’t sound a lot like your church, or what your idea of church may be — well, you’re probably right.

Its pastor is Josh Vernon, who at 25 looks like an unassuming kid, really — wearing black-rimmed nerdy glasses and a scraggly beard. Today, he’s sporting a black hoodie, black leather coat, khaki pants and bright blue Nikes, and says that’s pretty much what he wears when he preaches.

Likewise, the band and crew are casually attired. Their excitement in this new endeavor is anything but laid-back.

“We come in every week and set up,” Josh says. They prepare a room for worship, along with a children’s area in a nearby music room.

“One of the benefits of being in an elementary school is that it’s already kid-friendly,” Josh notes.

Right now, there are classes for children ages 0-2, 2-3 and 4-6. Josh also hopes to set up an adjacent room for elementary-aged children. “It’s something we want to get to as quickly as possible.”

Creating a safe environment for children is paramount. No one can go down the hall without a wristband that has a child’s corresponding number on it.

Josh has built Ecclesia Church from the ground up. He and wife Ella, a Spanish tutor at Rowan-Cabarrus Community College, have a daughter, Abbey, 2.

Josh worked on the church for about a year before the doors opened.

“It starts with a calling, with a passion and vision,” he says.

He actually started thinking about such a church six years ago, he says, when he was 19.

“He wasn’t your normal, typical teenager,” says Paul Lawing, who runs the soundboard. Paul’s brother Aaron leads a Coffee Talks discipleship class each Wednesday evening from 6 to 7 at Panera.

Josh served as youth pastor for Sloan Lake Community Church in China Grove. He has an associate’s degree from RCCC.

“So I’m completely qualified to pastor a church,” he says, laughing. “I have no seminary experience, but I’m working on that.”

The idea for this church, he says, was “birthed in the Gospel. We’re a young, cool church. But that’s not the goal. The Bible is relevant today. We don’t have to jazz that part up.”

Josh grew up as a strict Baptist, but wants to build a church for unchurched people.

“There are 200 churches in Rowan County,” he says, “we’re just a different flavor church. We’re catering to unchurched people. That’s who we’re going after. That’s the message and vibe we want to send out.”

In his research during the pre-launch phase, Josh found that there are 74,000 unchurched people in this county, 51.4 percent of the population.

In the first several weeks of services, Ecclesia’s weekly attendance averaged 82, Josh says. “If there’s one thing I picked up on in my business classes, it’s to know your mission, know your market, know your edge over the competition.”

He adds, “We want to embrace, equip and empower people to fulfill their potential in Christ.”

A lot of folks, Paul says, don’t like how formal church is, in dress and in music. “A lot of people relate to that. You don’t have to dress up to be close to God.”

The Ecclesia team wants folks to feel welcome. As visitors walk into the parking lot and to the front door, they’re greeted several times. There’s signage to show the way to the children’s area, the worship space and the restrooms.

Josh says he has used social media to get out the word about Ecclesia, but that word-of-mouth remains the best advertising method.

He plans to bring doughnuts and coffee to Koontz teachers once a month, to say thanks for sharing their school.

“We’ve had a couple of teachers come to our services,” he notes.

Inside the auditorium, visitors will hear “blaring, techno, upbeat music,” according to Josh. “We put a little spice in our salsa. It’s not for everyone. We believe church should be fun.”

But during worship time, Josh, too, wants the worship team to be able to worship.

“I just want us to be authentic,” he says.

Josh says he wants to preach with integrity. “During our pre-launch phase, the only thing I promised was that I would preach the Gospel every single week. The Gospel is anchored in everything we do.”

Some two dozen volunteers on the Launch Team are transitioning into a group called the Dream Team. In a year, that team raised $65,000 to start the church.

“We rent this space,” Josh explains. Other money was needed for mailers, marketing and equipment.

Josh worked all year to raise money. Just after Christmas, he had $20,000.

“I knew it wasn’t enough,” he says. He’d done everything from meeting with potential investors to working concession stands at Wake Forest football games to collecting scrap metal. He worked several jobs before quitting to start the church.

The last week of the year, a donor gave him $10,000, and then a church-planting organization matched the funds that had been raised.

Ecclesia (pronounced EK-cle-si-a) is the Greek word for church or congregation.

“The meaning is so rich and so deep,” Josh says. “The focus is on the church as a body, not just a building. We are a portable campus, but our emphasis is on the first-century church. Just like them, we are on fire for God and led by the Holy Spirit.”