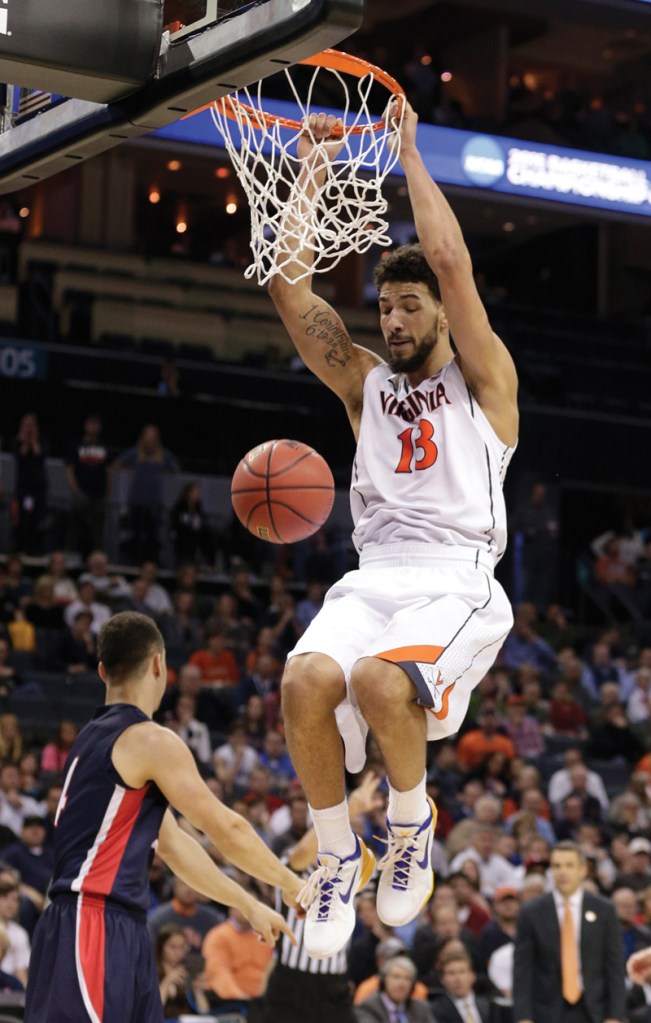 The Associated Press Virginia's Anthony Gill (13) dunks against Belmont during the second half Friday in the second round of the NCAA Tournament in Charlotte. Virginia won 79-67.

CHARLOTTE (AP) — At times, Michigan State showed off its tournament-tested look, getting out in transition and pushing back with poise after a run by its opponent.

At others, the Spartans were making mental mistakes and struggling to protect their late lead in a shaky finish that had coach Tom Izzo punching the scorer’s table in fury.

And yet, Michigan State did enough to beat Georgia 70-63 on Friday in the NCAA Tournament’s round of 64 behind veterans Denzel Valentine, Travis Trice and Branden Dawson.

Valentine scored 16 points, Trice had 15 and Dawson had a strong second half for the seventh-seeded Spartans (24-11), who proved Izzo right when he said Thursday that this team has a “very small” margin for error compared to some of its predecessors.

Michigan State led by 12 points with about 90 seconds left before Georgia (21-12) rallied to make it a one-possession game. Valentine went 6 for 6 at the free throw line in the final 30 seconds to help Michigan State advance to face No. 2 seed Virginia in Sunday’s round of 32 in the East Region.

“You saw a lot of good minutes and then you saw some bizarre plays,” Izzo said. “I think Georgia deserves some credit for that and we deserve some blame for that but we’re doing what you’re supposed to do in this tournament. We survived and we’re advancing.”

The Spartans showed at least glimpses of the experience from playing in 18 straight NCAA Tournaments. It was one of their biggest advantages against the 10th-seeded Bulldogs, who were in the field for the first time since 2011.

They led by 13 points at halftime, watched the Bulldogs rally within a basket, then responded with a 19-8 burst that put them back up by double figures. They did just enough late to stay in front about a week after blowing an 11-point lead in an overtime loss to Wisconsin in the Big Ten Tournament final.

“We’ve been in this situation before and there’s been times where we kind of fell apart and we knew we couldn’t do that this time,” Trice said. “So we just wanted to stick together.”

CHARLOTTE, N.C. (AP) — It wasn’t until 27 seconds remained in the game that Virginia coach Tony Bennett looked up at the scoreboard and breathed a sigh of relief.

The Cavaliers seem rather determined to use the NCAA Tournament to put a tinge of gray in their sixth-year head coach’s smooth black hair.

Malcolm Brogdon scored 22 points, Justin Anderson re-emerged as a scoring threat and second-seeded Virginia survived another opening-round scare, defeating 15th-seeded Belmont 79-67 on Friday in the round of 64.

Anderson, who is recovering from a broken left pinky, had 15 points on 4-of-6 shooting and Anthony Gill added 16 points for the Cavaliers (30-3), who recorded consecutive 30-win seasons for the first time in school history.

“I knew we were going to have to make some plays, get some stops and make some free throws,” Bennett said. “But you are never (comfortable) when you play a team like that that has big-play ability.”

Belmont (22-11) clawed within two behind 25 points from first-team Ohio Valley Conference selection Craig Bradshaw, but the Cavaliers outscored the Bruins 17-7 over the final 4:37 of the game.

Bennett said the Cavaliers were forced to guard Belmont in “unconventional ways” because of how they stretched the defense with several 3-point bombs from NBA range. At times, that led to some easy baskets and defensive breakdowns by Virginia, which came in with the nation’s No. 1 scoring defense.

CHARLOTTE — The Aztecs knocked off the Red Storm on Friday in the second round of the NCAA Tournament and the final game of the day’s slate at Time Warner Cable Arena.

The Aztecs are set to meet Duke on Sunday.

J.J. O’Brien had a team-high 18 points for the victors. Dwayne Polee II was right there with him with 15 points.

St. John’s Sir’Dominic Pointer had a double-double with game-high 21 points and 10 rebounds.