College basketball: Iowa too much to handle for Davidson 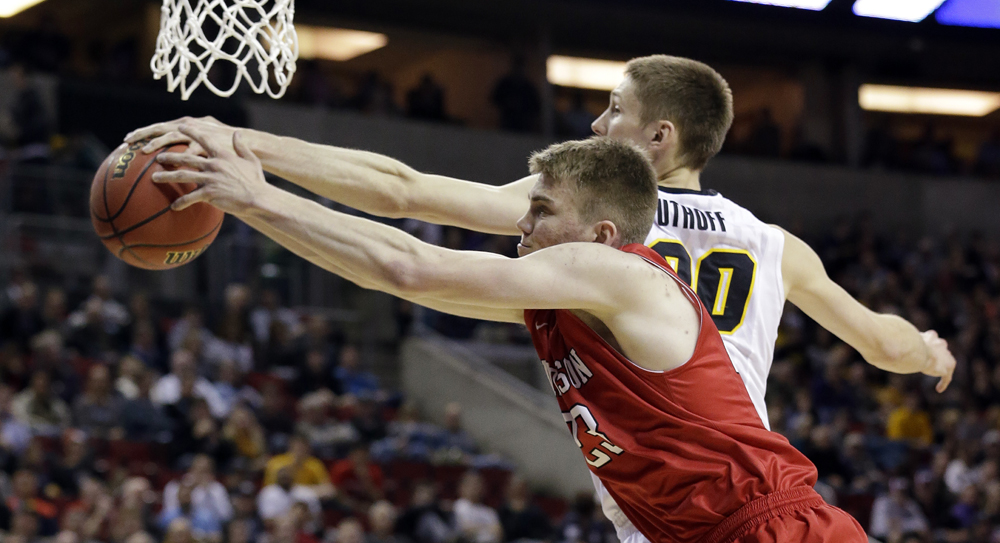 SEATTLE (AP) — Once Aaron White got rolling, Iowa could not be stopped.

White scored 13 straight points as part of Iowa’s 18-3 run early in the second half, and the seventh-seeded Hawkeyes rolled into the South Region round of 32 with an 83-52 rout of No. 10 seed Davidson on Friday.

White finished with 26 points as Iowa (22-11) used its significant height advantage to overwhelm the champions of the Atlantic 10 Conference regular season. Davidson had no answers on defense and couldn’t match Iowa’s shooting as the Hawkeyes won their first NCAA Tournament game since 2001 when they were also a No. 7 seed and won their opener.

Jack Gibbs and Peyton Aldridge scored 14 to lead Davidson (24-8), but the Wildcats never overcame three early fouls on Tyler Kalinoski, the A-10 player of the year. Kalinoski went the final 35 minutes without scoring, and finished with five points, snapping a string of 21 straight games in double figures.

Iowa was a question entering the tournament after getting knocked out of the Big Ten Tournament quarterfinals by Penn State, the 13th place team in the conference. Any doubt was erased with a strong first half and White’s performance in the final 20 minutes.

Iowa’s lead was nine when White got hot. He scored on seven of eight Iowa possessions and did a little of everything. He worked on the post and scored inside, showed his explosiveness with a thunderous dunk and hit an open 3-pointer. In a span of 7 minutes, White scored 17 of Iowa’s 22 points. By the time Brian Sullivan hit a 3 for Davidson to slow the run, the Hawkeyes lead was 18.

It was the largest margin of victory in Iowa’s tournament history.

While White helped Iowa finally pull away, the Hawkeyes first took control when Kalinoski went to the bench with three fouls with 8 minutes left in the first half. White hit both free throws and started a 16-4 run that gave the Hawkeyes a 34-19 lead when Jok hit his second 3-pointer of the half.

For the third straight game, Davidson trailed by at least nine points at halftime.

They were able to overcome the deficit to beat La Salle in the A-10 quarterfinals, but were blown out by VCU in the semifinals after trailing by 16 at the half and again by the Hawkeyes.