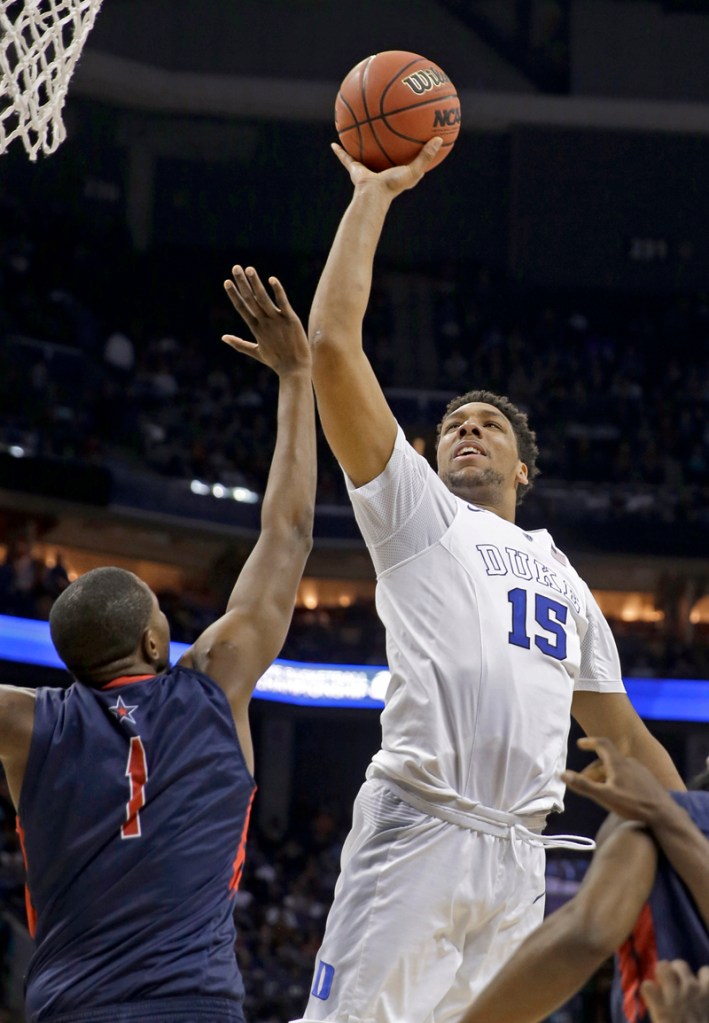 The Associated Press Duke's Jahlil Okafor (15) shoots over Robert Morris's Lionel Gomis (1) during the first half of Friday's NCAA Tournament game in Charlotte.

CHARLOTTE, N.C. (AP) — Quinn Cook scored 22 points to help No. 1 seed Duke get off to a torrid start and beat Robert Morris 85-56 on Friday night in the NCAA Tournament’s round of 64.

Freshman Jahlil Okafor added 21 as the Blue Devils (30-4) wasted little time getting their offense revving, hitting their first seven shots and 12 of 15 to quickly build a big lead.

That’s not to say everything went smoothly for Duke, a team with half of its eight scholarship players making its tournament debut. Hall of Fame coach Mike Krzyzewski furiously burned a timeout after Okafor blew a reverse dunk, while Robert Morris — the No. 16 seed that had to win a First Four game to get here — showed plenty of fight and kept hanging around for the first part of the second half before the Blue Devils finally put the game out of reach.

After Robert Morris (20-15) pulled within 10 midway through the second half, the Blue Devils ran off 12 straight points with a suddenly dominant burst to push the lead back to 68-46 on Amile Jefferson’s transition layup with 8:29 left.

Duke was in command from there for a routine 1-vs-16 finish, shooting 63 percent in the
program’s 100th NCAA Tournament victory.

Duke advanced to play the St. John’s-San Diego State winner on Sunday in the round of 32. The Blue Devils are a No. 1 seed for the 11th time in 18 seasons, though this is their first since 2011.

More importantly, Duke got off to a good start in the tournament after a pair of shocking one-and-done exits in the past four seasons, both coming in its home state of North Carolina.

Cook made 8 of 12 shots, including a 6-for-10 performance from behind the arc.

Meanwhile, Okafor had a strong start, too. Facing a hopelessly undersized front line, the freshman finished 9 for 11 from the field and played just 21 minutes.

Rodney Pryor scored 23 points on 10-for-19 shooting for Robert Morris, the Northeast Conference champions who were in their eighth NCAA Tournament.