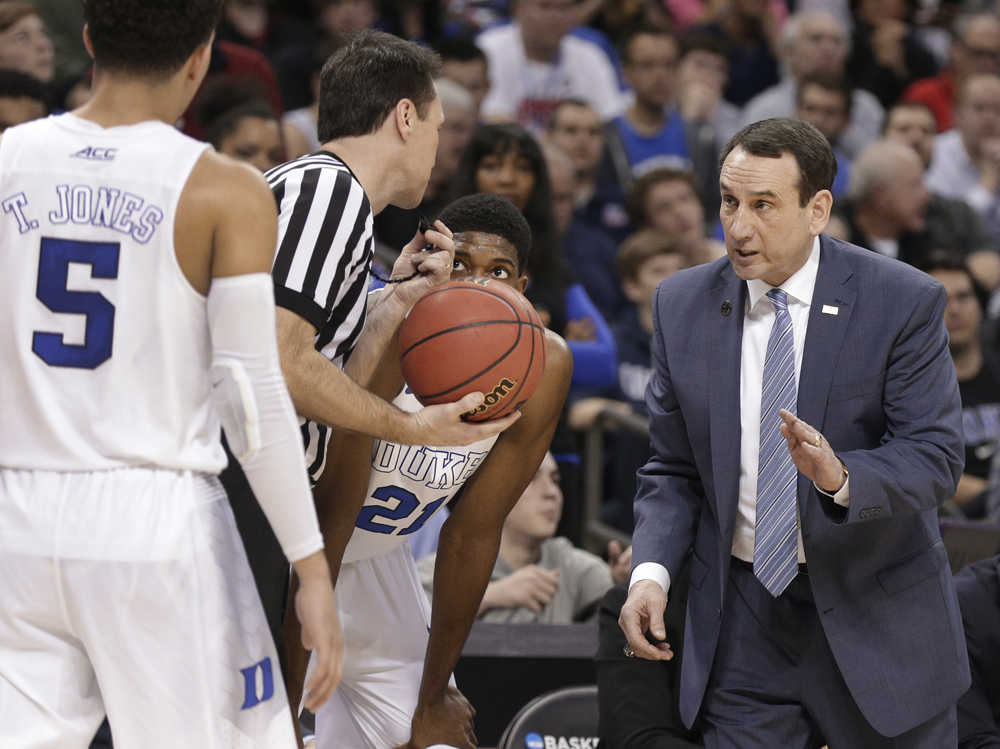 The Associated Press Duke head coach Mike Krzyzewski, right, talks to a referee during the first half of Friday's NCAA Tournament game against Robert Morris in Charlotte. Duke faces San Diego State and coach Steve Fisher on Sunday with a berth on the Sweet 16 on the line.

CHARLOTTE, N.C. (AP) — The last time Mike Krzyzewski and Steve Fisher met in the NCAA Tournament, they were coaching two of the most star-laden and memorable teams in college basketball history in a national-title game.

It was also before nearly every player on their current Duke and San Diego State rosters was born.

More than two decades later, they’re facing off again Sunday, when Krzyzewski and the top-seeded Blue Devils (30-4) face Fisher and the eighth-seeded Aztecs (27-8) in Sunday’s round of 32 in the South Region.

It’s a testament to the longevity of both coaches, one who has stayed put and become the winningest coach in men’s Division I history and the other who went west and built a consistent winner.

“The excitement for me is we’re playing,” Fisher said Saturday. “We’re playing in the NCAA Tournament, we won a game, we’re in the round of 32, we’re playing a great, great program but we’ll be worrying about the players on the floor.

“Mike is the architect and I think I would probably lose 10-9 in a game against him. But he’s not going to be playing. Nor will I.”

The two veteran coaches — Krzyzewski is 68, Fisher turns 70 on Tuesday — talked about a friendship that Krzyzewski said predated their only tournament matchup in the 1992 final.

The nearly 23-year gap will be the longest between tournament meetings for head coaches in NCAA history, according to STATS.

The two coaches have at least one thing in common — they’re still every bit as driven all these years later.

“It’s funny because when (Fisher) wants you to do something, he’s going to act it out for you,” senior Aztecs forward JJ O’Brien said. “So before he tells you what to do, he’s acting out himself, he’s moving his feet real quick and everything. He moves pretty well for a 70-year-old man, I must say.”

San Diego State guard Aqeel Quinn is still recovering from an apparent bout of food poisoning. Quinn said he started feeling badly after eating a turkey sandwich Thursday, then started vomiting and needed an IV by that night. He played just 19 minutes and went 1-for-6 from the field in Friday’s win against St. John’s.

Okafor had 21 points on 9-for-11 shooting in Friday’s tournament-opening victory against undersized Robert Morris. It could be a big tougher going against San Diego State, a team with more size and older guys up front. Aztecs junior forward Skylar Spencer said defenders must “always be aware … because when you playing against a good big man, you rest for one second they can catch you slipping, and that’s an automatic 2 points.”

When Duke is playing its best, Okafor is dominating inside then kicking out to set up open outside shots for senior Quinn Cook and freshman Tyus Jones. Duke hit 10 of 21 3s on Friday. Meanwhile, the Aztecs took an unusually high total of 22 in their opener, making nine. Fisher said he was OK with the shots because they were good looks.

Quinn Cook put it simply: Duke has to do a good job rebounding. “Those guys are humongous,” he said. “I think if we can control the boards and make those guys work, I think we’ll be fine.” The Aztecs finished with a 40-32 rebounding advantage in Friday’s win against St. John’s, while Duke — down to eight scholarship players — doesn’t have a lot of size outside of the 6-foot-11 Okafor and 7-foot reserve Marshall Plumlee.

Duke would love to speed up the tempo and get out in transition, while San Diego State would prefer to keep the Blue Devils from getting out and running. Duke averages 81 points per game and scored 17 fast-break points against Robert Morris. Compare that to the Aztecs, who average about 62 points and scored one fast-break basket against St. John’s.