Cheerwine was taste of home for naval officers in Africa 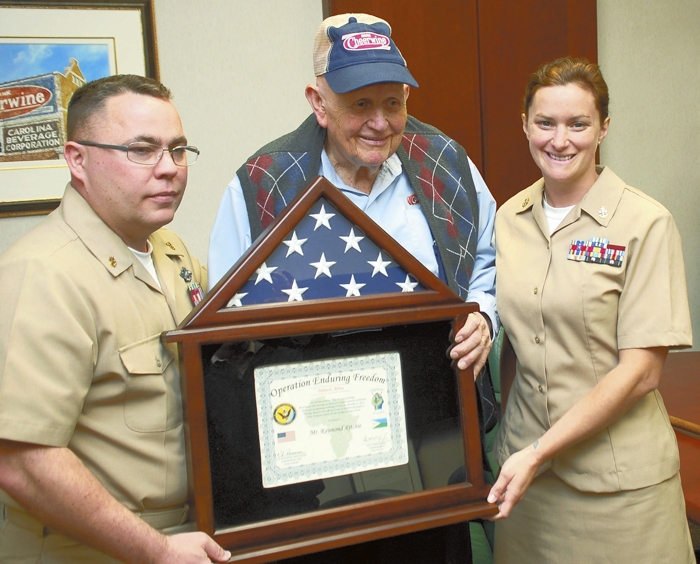 Mark Wineka/Salisbury Post Raymond Ritchie, center, receives a U.S. flag that flew over Camp Lemonnier in Djibouti, Africa, in honor of Cheerwine and its support and service to the military Presenting the flag are Naval Reserve officers Mark Benson and Lisa Rowe.

SALISBURY — Most Friday afternoons at Camp Lemonnier in Djibouti, Africa, U.S. Naval Reserve officers Mark Benson and Lisa Rowe would be among a group of men and women meeting at the chapel for songs and conversation.

At those gatherings, the participants also poured a lot of Cheerwine, which Benson’s wife, Yvonne, would send him by the case from their home in Hart County, Ga.

Benson and Rowe are close to Cheerwine fanatics, and they did their part, along with Richard Dailey of Salisbury, to introduce the soft drink to Camp Lemonnier.

The 29-year-old Rowe grew up in Sanford and especially likes Cheerwine floats with vanilla ice cream. There’s just somethign about the way it forms a crust on the top, she said.

Having Cheerwine on a regular basis, in a place as far away as Djibouti, was like comfort and aid from home. It helped in making long deployments away from family more bearable, Benson said, so he decided the Salisbury-based soft drink company should be recognized for its support of the military, whether the company realized how important it was or not.

“I wanted to do something,” Benson said.

Last October from Djibouti, Benson contacted Alice Edwards at the Cheerwine office by telephone. They had several conversations and emails and also brought in Tom Barbitta, senior vice president of marketing and sales.

Benson said he planned to fly an American flag over the camp in Djibouti in Cheerwine’s honor, and he wanted to do it on Christmas Day. In addition, Benson was looking to dedicate the flag to some service veteran who worked for Cheerwine, then bring that flag back with him to the States and personally deliver it to company headquarters.

All of that happened Friday afternoon. Cheerwine employees gathered in the company’s archives room as Benson and Rowe, both back from Djibouti, presented longtime Cheerwine employee, Army veteran and family patriarch Raymond Ritchie with the folded and encased U.S. flag that was raised over Camp Lemonnier on Christmas Day.

Benson also shared a video of the flag-raising ceremony and the folding of the flag in front of the camp’s sign, while a recording of Celine Dion singing “God Bless America” provided the background music.

Ritchie, father of Cheerwine President and Chief Executive Officer Cliff Ritchie, thanked the naval officers for the flag and said it would find a spot in the company archives room.

Cliff Ritchie told Benson and Rowe the company was honored they took Cheerwine to heart they way they did. He added it means a lot to the company and its employees to know the soft drink can provide comfort and joy to military personnel deployed around the world.

Benson said he heard a lot of references to family while visiting with Cheerwine officials Friday, and he thought that was appropriate, since having Cheerwine overseas made him feel closer to his own family.

Accompanying Benson to Salisbury were Yvonne and their sons Nathaniel and Matthew.

Chief Petty Officer Benson has been in the Navy for 22 years, most recently as a religious program specialist (chaplain’s assistant). He has been in the Navy Reserves for 18 years, and since his return from Djibouti at the end of January, he is part of the Operational Support Unit in Marietta, Ga.

Benson, a poultry farmer, said he plans to retire from the Naval Reserve at the end of this year. He was deployed multiple times during Operation Enduring Freedom, including three times to Afghanistan and, most recently, his 11 months in Africa.

Camp Lemonnier is the primary base of operations for U.S. Africa Command in the horn of Africa.

Yeoman Chief Petty Officer Rowe, an aviation warfare specialist, has served 11 years in the Navy. She started her Naval career on active duty stationed aboard the aircraft carrier USS Nimitz. She was deployed twice to the Persian Gulf in support of Operation Iraqi Freedom.

Rowe later joined the Naval Reserves and was deployed to Ali Al Salem, Kuwait, in 2012 in support of Operation Enduring Freedom. She was deployed again in 2014 to Djibouti.

Benson said Rowe will be deployed next to Afghanistan.