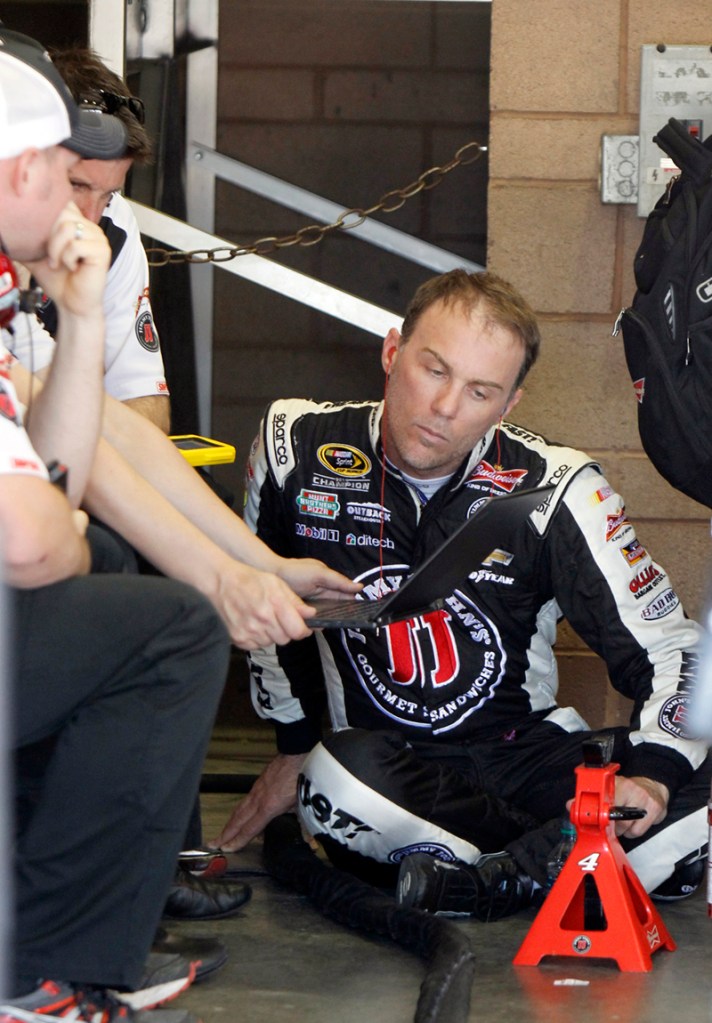 The Associated Press Kevin Harvick, right, talks with his crew Friday in the garage during a practice session to qualify for Sunday's race in Fontana, Calif. With wins at Las Vegas and Phoenix in the last two weeks, Harvick is gunning for a sweep of the Sprint Cup Series' West Coast swing.

FONTANA, Calif. (AP) — Although Kevin Harvick is on the biggest roll NASCAR has seen in four decades, the California native has been driving too long to take anything for granted when he attempts to complete his West Coast sweep.

“In life in general, you’re never bulletproof,” Harvick said. “About the time you start thinking that, I always tell people, the karma train will come run you over.”

Harvick has looked a bit like a runaway train himself on the way to Fontana.

After two straight victories following two runner-up finishes to open his impressive season, Harvick’s Chevrolet will start in the front row Sunday alongside pole-sitter Kurt Busch, his Stewart-Haas Racing teammate. The wide banks and well-aged asphalt at on this 2-mile oval typically make for entertaining races, but everybody in NASCAR is chasing Harvick right now.

Harvick is on a run of four wins and three second-place finishes dating to last season, when he won the Sprint Cup title. The numbers are dizzying even to Harvick, who is trying to stay focused on the process that got him to this lofty spot.

“We’re going to put that pressure on ourselves anyway,” Harvick said. “Having everybody expect you to do well is great. … I know that we’ve been fortunate to have some early season success, but it really doesn’t change anything that we do.”

Busch could be the primary challenge to Harvick after leading every practice and winning the pole.

Several NASCAR drivers dropped into various Hollywood productions during this week in the Southern California sun, and big-name movie stars frequently make the drive one hour east to the Inland Empire for the race weekend.

They’ve been rewarded with fireworks the last several years on this grooved, multi-lane track, which was last repaved in 1996. Brad Keselowski called it “the best racetrack we have right now on the circuit,” and the race is sold out for the second straight year.

Jimmie Johnson has a record five victories at the track closest to his own hometown, but Harvick’s dominance has made everything else secondary in the new NASCAR season. Harvick only hopes to keep it going.

“Hopefully we can continue to do the things that we’re doing,” Harvick said. “Really, just business as usual.

Hamlin will be hoping for a redemptive run after his last two trips to Southern California went quite poorly. He was airlifted from the track in 2013 after his collision with Logano sent him into the inside wall. Hamlin never even got on the track last year, scratching himself at the last minute with what turned out to be a sliver of metal under his right eyelid. Hamlin has two top-five finishes this season.

Not everything is going well at Stewart-Haas Racing. Stewart, who won at Fontana in 2010 and 2012, is off to the worst start of his career at 36th place in the standings, the lowest of any full-time driver. Stewart, who hasn’t finished higher than 30th, is even below a handful of drivers who have missed races. The new NASCAR rules package will be used on a 2-mile track for the first time Sunday, and the three-time series champion’s team has another chance to figure it out.

Roush-Fenway Racing’s three Fords couldn’t get out of the first round of qualifying Friday, sending them back to the drawing board. The drivers are hoping to alleviate some of their frustration, but it’s getting higher. “This is unacceptable for how good of a team we are,” Greg Biffle told the FOX Sports 1 television broadcast on Friday.