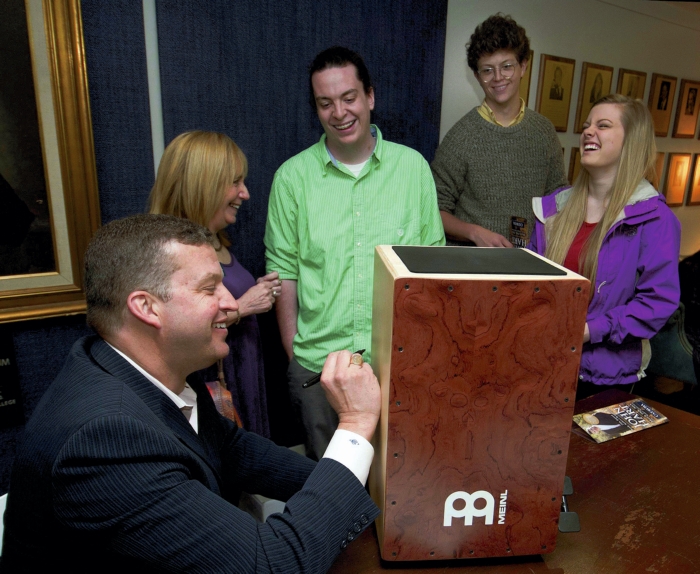 “I always think of Salisbury as home,” he said, then asked how many people had read his books. When most of the hands in Keppel Auditorium went up, he said, “I love it!”

“The written word still holds such an amazing power. I’m blessed to be able to make a living in this field.”

Since he has spoken here a number of times, Hart said he would talk about the most frequently asked question every author gets, ‘Where do you get your ideas?’

“It always seemed to me like something I didn’t need to explain,” Hart said, “I have no idea where I get my ideas.”

But the more he thought about it, the more abrupt that seemed. When he started writing his first published book, “The King of Lies,” he remembered hearing, “Write what you know.” That seemed nonsensical, too. He set that book in his hometown, “I knew it well, I knew the habits, the cadence of the speech, the people.”

He assumed it wouldn’t be published, just like the first two novels he wrote. But he thought if it did make it, he’d have to change some names. He just forgot about it when the book became a reality.

He started that book in 2000, and it finally came out in 2006. When he started, he knew he hated being a lawyer. He created Work Pickens, a lawyer who hates his work. He had him living in the house John lived in in Salisbury, details described places like the old Towne Mall and a holding cell in the Rowan County jail.

Hart, who now hangs out with John and Jeffery (Grisham and Deaver) and a few other writers, says those guys outline everything — as much as 230 pages of outline — but he can’t do that.

When writing a scene from “King of Lies” during which someone throws a chair down some stairs, hitting Work, Hart had no idea who it was or why it was done. With his hope and grope method, he knew he’d figure it out.

Hart also knew Work came from a bad childhood, that he grew up weak under an overbearing father and that he had to be strong to get through hard times and adversity.

Hart has to know his characters before he begins plotting. “Grisham and Deaver are probably the lucky ones. I have to live it or it doesn’t work for me.”

With “Down River,” Hart took the other side, writing about a man accused of a crime for which he was found innocent, though his own father and many others thought he got away with murder. Adam Chase comes back home after years away, and he sees a boy fishing on the river Adam (and Hart) so loved.

That boy became Johnny Merrimon of “The Last Child.” In that book, Johnny has lost faith in all the people who should be caring for him.

Hart fell in love with the kid by the river, and wanted to develop him.

Working on his third book, Hart found developing interesting people was fun. Creating people who don’t have a skill set — unlike his hit man in “Iron House” — but are regular people who are trying to deal with extraordinary circumstances was his key. “It’s the small things that show who they are.”

He likes writing dark, about broken families, sacrifices, faith, hope and trust. Many of the characters had bad childhoods. “Mine was quite lovely, but a lot of people had problems.” He said it’s “fascinating and impactful when you involve family.”

Hart likes being called a Southern writer, because Southern literature is one of the great traditions.

“I think every book needs to be better; that’s not always possible, but it’s what I want to do.”

Sales of his books went up with each new novel. “The Last Child” spent 37 weeks on the bestseller list and earned him his second Edgar award in a row (like an Oscar for a mystery writer). He also won for “Down River” in unprecedented back-to-back wins.

“I thought I had it made,” but he paid for his pride.

He created a soft landing for Johnny Merrimon. For the next book, he created a boy who didn’t have that privilege, Michael, the hit man of “Iron House,” a victim of a horrifying, tortured childhood.

Then came book five. “In the first four books, I knew exactly who the main character was and what they were going to do. … There needs to be meaningful growth in that person. It only works if I know those characters.”

He thought book five would be easy. “But I wasn’t paying enough attention to who the characters were.”

Ten to 11 months into it, with about 300 pages, he realized his true line was off and getting worse the more he wrote. He asked his publishers to start over. They agreed.

Book five contains his first female protagonist, two actually, and the publishers are excited about the results. An audience member asked him if writing from a female perspective was hard. “We’ll see,” he laughed.

Hart’s biggest treat was hearing a trio of Catawba College students sing a song with words by Catawba President Brien Lewis that included all the titles of his books, along with some lavish praise. Hart loved every minute. Maybe it will show up in one of his books.