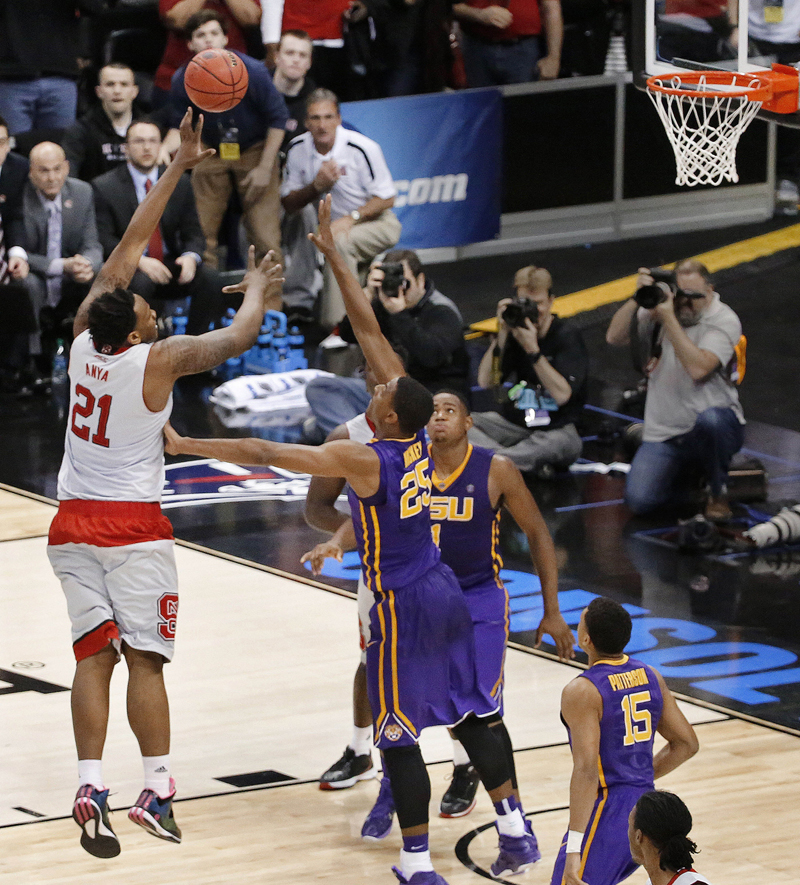 PITTSBURGH (AP) — They are the plays that truly put the madness in March.

Dwayne McClain pounced on the ball like a linebacker trying to recover a fumble, smothered against his chest until the final horn sounded and the eighth-seeded — yes, eighth seeded — Villanova Wildcats won the 1985 national title.

Each season, the replays are as much a staple in March as the unveiling of brackets and cutting of nets. The ‘85 celebration is replayed on a loop inside the main lobby of Villanova’s practice facility and has become impossible to miss.

“I just saw the air ball and the guy put it back in,” said fifth-year Villanova senior JayVaughn Pinkston. “I haven’t seen ours yet.”

Big East co-player of the year Ryan Arcidiacono laughed as he gave his teammate a hard time.

“There’s a constant video outside of where we practice that you can replay the whole national championship video and it literally, it’s playing all day,” he said.

Pinkston shrugged it off: “I never really paid any attention.”

The top-seeded Wildcats (33-2) have plans of adding their own national championship celebration to a new reel. The eighth-seeded Wolfpack (21-13) stand in the way in Saturday’s East Regional game.

Both programs have spent three decades trying to recapture that championship feeling; Villanova made the 2009 Final Four while the Wolfpack haven’t been as far as the Elite Eight since 1986.

N.C State players are a bit more aware of how the ‘83 title game finished since Whittenburg is an assistant under coach Mark Gottfried.

The Wolfpack need to be fueled by more than memories for a shot at knocking off Nova. Led by a potent 3-point offense, the Wildcats are playing as well as any team in the bracket. VU has won 16 straight game and shot a season-high 63 percent in its 93-52 win over Lafayette.

Gottfried, though, has a bit more positive recent history on his side. He led eighth-seeded Alabama to a win over No. 1 Stanford in the second round of the 2004 tournament.

“You have to believe that you have a chance to win,” he said. “Our team this year believes that, as did that team in 2004. You know that comes from playing against great teams. We’ve played good teams. We’ve beaten really good teams.”

The Wolfpack have plenty of fantastic wins, topping Duke, Louisville and North Carolina this season, so they should hardly be intimidated by the Wildcats. It’s the losses to Wofford, Boston College, Clemson and Miami that have bit the Wolfpack.

They’re coming off a thrilling rally from 16-down against LSU, won on BeeJay Anya’s hook shot with a second to play.

“We have to approach every game like it’s a Duke or a Carolina,” guard Trevor Lacey said.

The Wildcats are on a mission to get to Indianapolis and they know what happens over the next two weeks will define their season more than a pair of Big East championships and defeating every team on their schedule.