College basketball: Anya comes through in clutch for Wolfpack 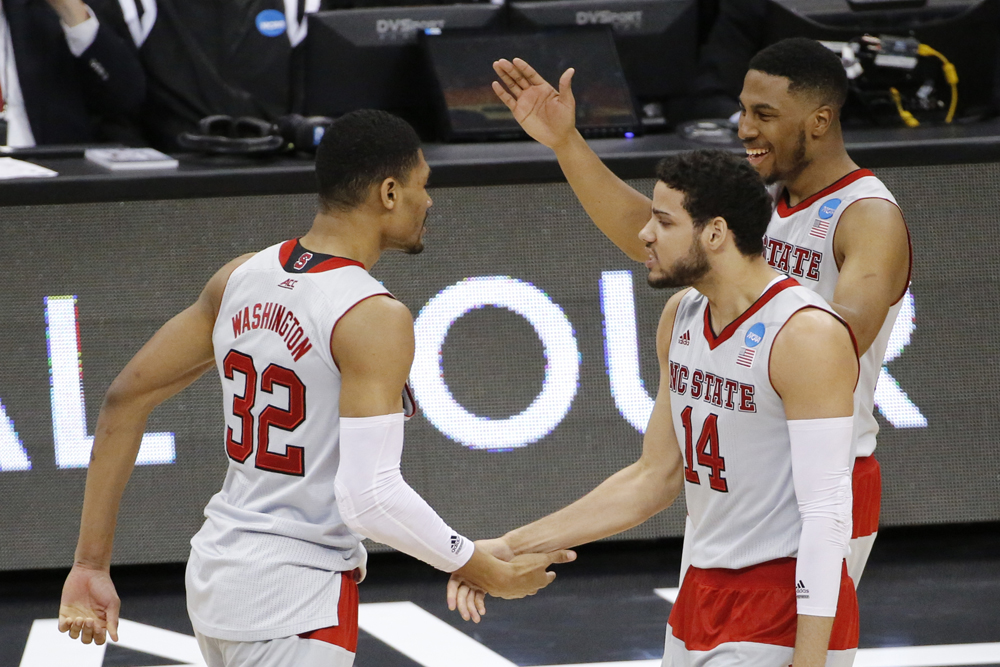 The Associated Press N.C. State's Kyle Washington (32) is greeted by teammate Caleb Martin as they get close to LSU during the second half of an NCAA Tournament game Thursday in Pittsburgh. North Carolina State won 66-65 to advance to the third round.

PITTSBURGH (AP) — BeeJay Anya’s hook shot rolled around and in with a second to play, lifting North Carolina State to a stunning 66-65 victory over LSU in the NCAA Tournament on Thursday night.

The eighth-seeded Wolfpack (21-13) trailed by as much as 16 but rallied to earn a date with top-seeded Villanova in the round of 32 on Saturday.

Cat Barber led N.C. State with 17 points and Abdul-Malik Abu added 13, but Anya came up with the biggest play of the game. Senior Trevor Lacey tried to work for a shot with the clock winding down before giving up and feeding Anya in the block. The burly sophomore got off a left-handed hook in the lane and it caromed in.

Tim Quarterman scored 17 points, but the Tigers (22-11) collapsed late. Jarell Martin had 16 points and 11 rebounds, and Jordan Mickey had 12 points and 14 boards.

LSU missed its last 12 field goals and six crucial free throws in the final 4 minutes in another late-game collapse.

Riding the athleticism of their two sophomore big men and Quarterman’s budding confidence, the Tigers attacked in the first half. LSU filled the lane repeatedly, soaring over the Wolfpack at times and racing around them at others.

Mickey ended the half with a traditional three-point play, and then a dunk as the Tigers took a seemingly commanding 40-26 lead.

N.C. State slowed the pace just enough to force LSU to play half-court offense. The Tigers didn’t take well to the change in tempo. Their flow disappeared and the Wolfpack slowly chipped away.

A free throw by Martin put LSU up 61-48 with 9:39 to go before the Tigers fell apart. LSU did not hit a shot the rest of the game and when the Tigers went cold at the free-throw line, N.C. State pounced.

A tip-in by Anya pulled the Wolfpack to 65-64 with 46 seconds left. Mickey badly missed two free throws to give N.C. State one more shot.

The ball went to Lacey but he couldn’t get a shot off before finding Anya. His second basket of the game propelled N.C. State into the next round and gave the tournament its fifth one-point game of the day.

LSU: The Tigers finished 12 of 22 at the free-throw line and shot just 29 percent (7 of 24) in the second half. … LSU outscored 28 points in the paint alone in the first half, more than N.C. State managed during the opening 20 minutes.

N.C. State: The Wolfpack made just 5 of 24 3-pointers. … Lacey had nine points and nine rebounds in 38 minutes. … Former LSU player Ralston Turner had 10 points against his former team.