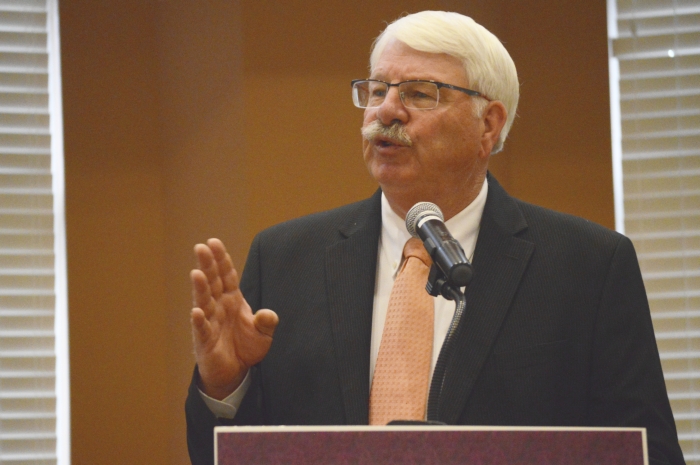 North Carolina’s agriculture commissioner Steve Troxler has a $100 billion goal, and he’s only got five years to do it.

In a speech to the Rowan County Chamber of Commerce at its Power in Partnership Breakfast, Troxler said his goal is to boost the state’s agriculture industry to $100 billion in revenue by the year 2020. Troxler said he’s been questioned previously about the short time period to accomplish his goal, as North Carolina’s agriculture industry current sits at a valuation of $78 billion. His response is that picking an ambitious goal is a motivating factor.

“The growth of agribusiness absolutely can meet that goal,” he said. “We will never get there if we don’t start today.”

He invoked history when explaining how revenues in the state’s agriculture industry could rise to $100 billion in just a few years. In North Carolina 100 years ago, Troxler said, a majority of farmers were producing enough food to feed the same amount of people possible in 2015.

“In North Carolina, we were lucky to have a cash crop called tobacco,” he said. “Tobacco let us accumulate enough cash to send our kids to college and to diversify farming operations. We have gone from feeding our own family to one farmer being able to feed 155 people now. That’s an amazing statistic.”

“We’ve had some good policy and bad policy, quite frankly, along the way,” Troxler said. “The real answer though, is agriculture research.”

He joked that farmland is always too dry, too wet and too hot all at the same time. Agriculture research, Troxeler said, has helped boost output by developing strains of plants that are weather resistant.

But achieving the goal of boosting the agriculture industry’s revenue isn’t without some difficulties. Among the greatest of those are natural resource shortages.

“We’ve led the nation some years in the disappearance in farmland,” he said.

One reason behind shrinking farmland acreage is urbanization.

“We know we’ve got to do more, we know we’re going to have less natural resources and we also probably will have less inputs,” he said.

Water is one example of an input that he cited.

If global warming causes the climate to change significantly across the United States, he joked that North Carolina might just be in a perfect spot.

But what if North Carolina and the nation can’t meet the growing demand for food?

“I’ll tell you in my southern vernacular what that means,” he said. “Hungry people are mean people. The United Nations says it more eloquently when they say that, if we don’t meet the fertilized food demand, we’re going to see some things that civilized society don’t like — terrorism, unrest, political turnover.”

Troxler said farmers and North Carolina residents as a whole have a moral obligation to meet the food demand.

“If there’s going to be that much demand for agricultural products, then we need to seize on the opportunity to be successful economically, too,” he said.