The Salisbury Symphony offers a cure for your ‘cabin fever’ 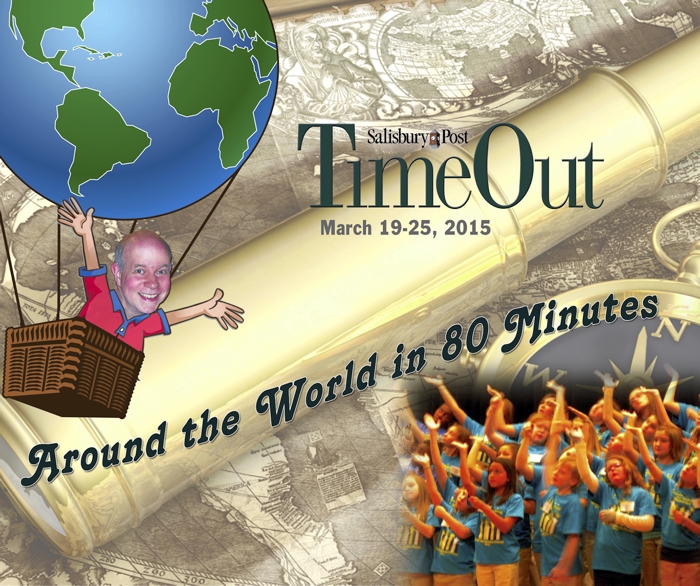 With spring just around the corner and a cloudy winter almost a memory, the Salisbury Symphony offers a cure for your “cabin fever.”

The family concert, “Around the World in 80 Minutes,” is scheduled for Sunday afternoon, March 22, at 4 p.m. in Keppel Auditorium at Catawba College.

The Salisbury Symphony and the Rowan County Fifth Grade Honors Chorus will “jet set” you to Scotland, Australia, Korea, Finland, Italy, Indonesia, (whew!) Iraq, the Congo, Kenya, Arabia, Russia, and the Ukraine! No need for a passport, and the tickets are “family priced.”

Added perks include a display of dolls from around the world, displayed in the lobby, courtesy of the Spencer Doll and Toy Museum, and blue punch after the concert, a specialty of concert sponsor Fibrant!

The music is a mix of folk music and classical music inspired by cultural heritages. “Waltzing Matilda” from Australia might be familiar already, and Finlandia by Jean Sibelius is a favorite of many. Music director David Hagy adds Variations on a Korean Folk Song, a tarantella from Italy, an Indonesian piece that includes the gamelon, and a traditional Scottish composition from Leroy Anderson, “The Campbells are Coming.”

An exceptional Verdi composition, Chorus of the Hebrew Slaves from Nabucco, will be sung by the Livingstone College Choir (DaVaughn Miller, director) and members of the Catawba College Choir (Phillip Burgess, director).

“I can’t resist ending this concert,” admits David, “without including the Russian and Ukrainian selections from Pictures at an Exhibition by Mussorgsky. What a musical way to remind people of the cultures behind current events!”

The Rowan County Fifth Grade Honors Chorus, 150 strong, will sing “Watoto Wa Dunia” (“Children of the World”) from Kenya and “A Whole New World” from the movie Aladdin.

The Spencer Doll and Toy Museum will showcase an international doll collection in the lobby highlighting a variety of handcrafted and professionally made dolls from around the world. Each figure has been selected to depict the culture of the native country represented, and most of them are hand-made by local artisans. Countries represented will include but not be limited to Australia, Scotland, Korea, Finland, Italy, Bali, Iraq, Thailand, Arabia, Kenya/Tanzania, the Ukraine, and Russia. Their shape and costume will vary according to region and custom. The dolls are made of many-layered textiles including straw, wood, cloth, vinyl and paint. Elaborate dolls in national costumes of their countries and foreign travel dolls are sure to delight. The Spencer Doll and Toy Museum is open Thursday-Saturday from 10 a.m.–4 p.m. For more information, call 704-762-9359, or visit www.SpencerDollAndToyMuseum.com

Fibrant is the concert sponsor and helps make it possible to lower prices for this afternoon family concert. Ticket prices are $18 for ages 19 and older, $4 for students (ages 9-18 and any college student with a student ID), and $2 for children ages 8 and younger. Tickets may be purchased in advance at any of the ticket outlets in Rowan County: Rowan County Visitors Center, Sidewalk Deli (Salisbury), Pinocchio’s in Spencer, Crescent Pharmacy in Rockwell, and Corriher Springs Florist in China Grove.

For more information or to purchase tickets on line, visit salisburysymphony.org or call 704-637-4314.

The Spencer Doll and Toy Museum will showcase an international doll collection in the lobby highlighting a variety of handcrafted and professionally made dolls from around the world.

The dolls one display will represent countries/cultures whose music Symphony Director, David Hegy will be including in the concert. In addition, others will represent various places including Australia, Scotland, Korea, Finland, Italy, Bali, New Orleans, Iraq, Thailand, Arabia, Kenya/Tanzania, the Congo, the Ukraine and Russia.

This international doll collection will highlight handcrafted dolls from around the world. Each figure was selected to depict the culture of the native country; most of them are hand made by local artisans.

The Spencer Doll and Toy Museum is open Thursday-Saturday from 10 a.m. to 4 p.m. For more information, call 704-762-9359, or visit www.SpencerDollAndToyMuseum.com