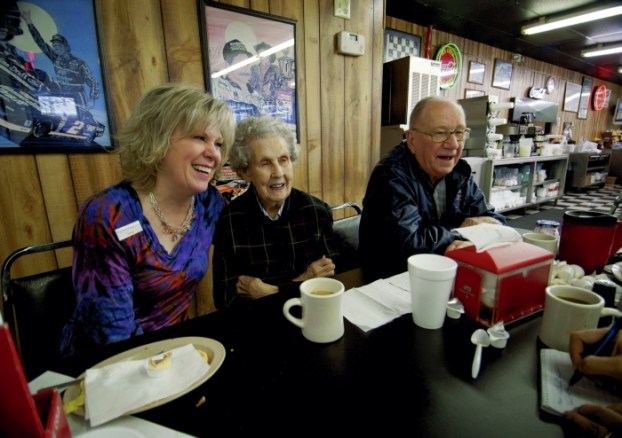 JON C. LAKEY / SALISBURY POST Pam Hylton Coffield shares a laugh with her mother Margaret (94) and her dad Wallas (95) at breakfast on Wednesday morning. Wallas Hylton and his wife of 74 years Margaret meet their children Pam and Bill for breakfast every morning since 2006. The location has changed over the years as resturants close down and go out of business. Most recently the Hyltons have been coming to Checkered Flag on South Main Street which they come 6 days a week. On Sundays they go to the new Waffle House on East Innes Street, except for Bill who has other family commitment. Wednesday, March 18, 2015, in Salisbury , N.C.

SALISBURY —Each morning, one of the first things Wallas Hylton does is pray for everyone in his family. He calls them out to God by name, including his six grandchildren and 18 great-grandchildren.

Hylton and his wife, Margaret, eventually dress, slide into their station wagon, and Wallas drives them to the Checkered Flag restaurant.  Inside, they find their regular table with son Bill and daughter Pam.

By now, the Hyltons have the cooks and waitresses at Checkered Flag trained, and admitting this prompts Wallas to laugh. He has one of those infectious laughs that makes you wish you were sitting at his table, where they’re having all the fun.

“You can’t be around him and not have fun,” Bill Hylton says.

Wallas Hylton almost always has a pancake and coffee. Margaret and Pam opt for egg sandwiches, or Pam might share in whatever Bill orders, which is often an omelet.

They meet for breakfast at the Checkered Flag Monday through Saturday, On Sundays before church, Wallas and Margaret break their routine and go to the Waffle House.

It takes a restaurant about two months before it figures out how to make Wallas’ pancake, Pam says, and his waffle at Waffle House requires 5 minutes, 5 seconds for it to be the way he likes.

“Once we get them trained, they know exactly what to do,” Wallas reiterates, and he’s doubled over in laughter again.

Sometimes grandchildren, great-grandchildren, spouses and friends might join them, but this core group of four — Wallas, Margaret, Pam and Bill — have been meeting for breakfast regularly since 2006. They started out at iHop, moved to the Farmhouse for years, and over recent months have made the transition to Porky’s IV and now Checkered Flag.

Wallas notes that the Farmhouse and Porky’s IV have closed, and he wonders if the Hylton clan put them out of business. Again, the laugh.

Wallas and Margaret’s 74th wedding anniversary is coming up in April. He’s 95, and she’s 94. They both are cancer survivors, and Wallas also lived through a heart attack in 1998. But nothing seems to get the couple down.

“Both of them are Christian people, raised in Christian homes,” Bill says. “The Lord put them together and made them one, and it’s their family that has kept them strong.”

When Wallas fields that question — what’s been the secret behind their long marriage? — he stops for a moment.

“I have no idea,” he says, breaking the long silence. This time the whole table is laughing.

Wallas and Margaret met in 1940. She was the comely daughter of a Roanoke woman who ran a boardinghouse, and Wallas rented a room from her.

He was a sales clerk at the Montgomery Ward store in Roanoke before signing on with Goodyear Tire and Rubber Co. His career would be intertwined with the Goodyear company for 60 years.

Wallas couldn’t help but be attracted to Margaret Yates, who worked for the draft board in Roanoke.

“If you’ve ever seen her photos, there was a whole lot to like — and still is,” Bill Hylton says of his mother.

The couple married April 11, 1941. As the United States became fully committed to World War II, the Army drafted Wallas in 1942 and sent him to basic training in Oregon.

“They found out they made a big mistake,” Bill Hylton says.

Wallas Hylton refused to say anything at his Army physical about the rheumatic fever that inflamed his heart as a child. He didn’t want anyone to think he was trying to avoid service, though his heart beat a little faster than it should.

Hylton finished almost all of basic training without any real problems until one of the final days when his squad endured a hot, 25-mile hike, followed by a three-mile walk back to base. He was sitting later in the mess hall  when he blacked out, and his next memory was waking up in a hospital bed.

One of the doctors guessed he had suffered from rheumatic fever as a kid and decided Hylton’s heart condition was too much of a risk. He received a medical discharge and headed back home to Virginia with Margaret and their infant son, Warren.

Earlier, with baby Warren in tow, Margaret had traveled by train across the country to Oregon.

Goodyear Tire immediately asked Hylton to manage a store in Covington, Va., Wallace and Margaret also would live in Lynchburg for awhile, before Goodyear jobs would take the Hyltons to three different towns in Georgia.

Bill was born in 1945, followed by Pam in 1955. The family moved to Salisbury in 1960 when Wallas joined Brad Ragan and his growing Carolina Tire Co, Ragan hired Hylton as his assistant general manager for retail and put him in charge of the Salisbury store and six others in the region.

The Hyltons still live in the Salisbury home they bought 55 years ago.

The Carolina Tire Co. store in Salisbury was located  at the corner of South Main and West Horah streets, while Brad Ragan’s recapping division operated out of a three-story building at North Main and West Liberty streets, where today’s Rowan County Sheriff’s Office and jail now stand.

By 1963, Brad Ragan had moved its retread plant to a new building off U.S. 601 — today’s Jake Alexander Boulevard. A distribution center would follow, and Salisbury became the company’s hub for its retail operations, good for Hylton, but he also found himself on the road a lot.

The Carolina Tire retail stores kept their Goodyear connection throughout, and Goodyear eventually bought them all back from Brad Ragan. At one time, the stores sold tires, GE appliances, furniture and a variety of other car and home items.

Wallas loved his work and the people he worked with. He also learned an important retail lesson.

“Do something special for a customer, and he’ll be yours forever,” he says.

The last 10 years of Wallas’ association with Brad Ragan — he retired when he was 79 — the company moved its offices to Charlotte, and Hylton carpooled every day. He loved all the kidding with his carpool friends during those daily trips.

Warren Hylton would eventually return to Augusta, Ga., and build a successful career in the billboard business. He died several years ago of brain cancer.

Bill Hylton owned a service station for a time, worked for Carter Chair, dabbled in the fire and burglar alarm business and eventually retired after 22 years with Grinnell Corp.

It all grew out of their experience working for National Fabrics at Towne Mall, where Margaret was assistant manager and Pam was a summer employee.

They arrived at National Fabrics one morning to find the doors padlocked and the store’s inventory removed by the company overnight. “That sort of opened up the door to opening our own business,” Pam says.

Margaret had taught her to sew when Pam was 10 and knit when she was 12.

In the mid 1970s, the popularity of cross-stitch was growing, and the women provided a store that carried needlecraft, yarns and other supplies, not to mention the countless classes they taught.

The store started with Margaret, Pam, Bill’s wife, Nancy, and another employee. Wallas Hylton, whom the family considers a genius with numbers, always helped with keeping the books.

Margaret served as the store’s anchor as Pam, who had attended college for a couple of years in Florida, finished out her bachelor’s degree by attending Salisbury Business College, Rowan Technical College, Pfeiffer College and, finally, Catawba College, where she was an honors student in business administration.

“I feel like that’s what got a good foundation going at the store,” Pam says.

Customers still come into the store, asking for Margaret Hylton, though she has been retired about 12 years.

As a side business for about 13 years, Bill Hylton offered framing services at the store.

“That’s how I put the kids through college,” he says.

When demographics changed in the 1980s and more women went to work and had less time for needlecraft, The Stitchin’ Post diversified and moved heavily toward gifts.

Today, Stitchin’ Post Gifts, along with Thread Shed Clothing at 133 S. Main St., are among the longest-established businesses in the downtown.

“Pam’s an expert merchant, and she learned that from Dad,” Bill Hylton says.

Wallas and Margaret Hylton attend Bethany Bible Chapel on Stokes Ferry Road. The always active Wallas still mows his lawn, and he and Margaret often enjoy eating lunch at Sidewalk Deli, then making a supper out of their leftovers.

Wallas says he probably got his sense of humor and penchant for laughing from his mother and father. Even when he thinks back on his six decades of work, Hylton has only fond memories.

“It’s was just like a party every day,” he says.

Wallas Hylton, who likes jelly on his morning pancake, is a whiz on the computer, Pam says. He has his own Facebook page and also keeps up with everybody through emails. He saw the advantages of computers early on in business.

But go back to that question about him and Margaret and how they’ve been happy for so long.