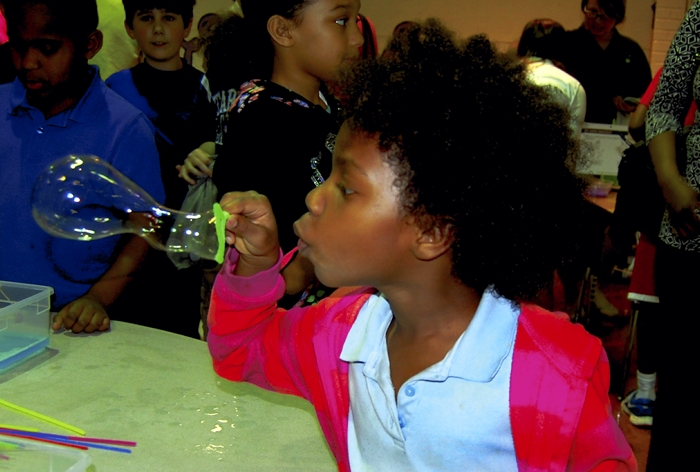 By Peyton Rodgers and Jeanie Groh

KANNAPOLIS — After a long day, the last place most students want to spend their evening is school, but students at Woodrow Wilson Elementary School in Kannapolis showed up in droves last Wednesday to make gross goo, launch stomp rockets and construct marble rollercoasters.

Bianca Bodrick said her son was excited to come to the Duke Energy Science Night.

“My son is really big on science,” she said. “It gets them involved other than just being in the class all day.”

Twelve stations with fun, interactive activities were set up around the school dealing with different STEM, or science, technology, engineering and math, principles. These activities allowed the students to expand their knowledge of science while having fun.

At this station, students created a rocket out of paper and slid it onto a tube connected to an empty two-liter bottle. Then, the students stomped on the bottle, causing the paper rocket to fly across the gym.

Jijon showed the students how to create their rockets and explained how they work.

He said that the activity helped the students learn about angles and force, as well as developing their construction skills.

Using, foam, tape and books, Meredith and Nathan Hall created a looping track for a marble in the marble roller coaster activity.

The pair, along with A.L. Brown senior Caleb Hicks, began their track several feet off the ground by taping the foam tubing to the wall, then they twisted the track into a loop.

Meredith and Nathan took turns dropping the marble down the track to see what changes they needed to make so the marble could make it all the way through its course.

At one station, students made bracelets based on their own unique genetic characteristics.

Second-grader Lily Beaver said they decided which color beads to put on her bracelet by different traits, such as the shape of her ear or whether she could roll her tongue.

Sandy Sumemerlin, the STEM teacher at the school, said the optional event was open to Woodrow Wilson students and their families.

The night opened the door for students to see themselves as scientists, she said.

“It’s getting them engaged and excited about science,” Summerlin said.