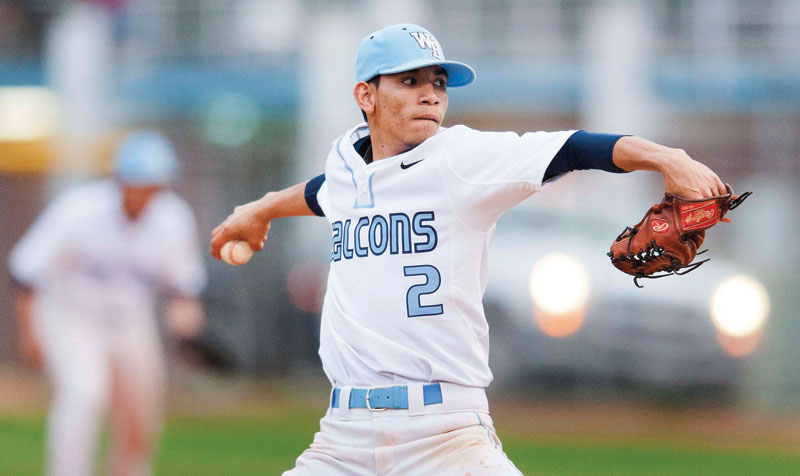 MOUNT ULLA — West Rowan right-hander Omar Bautista has been one of the county’s toughest pitchers for years, but he’s also been the unluckiest.

That’s why, even with skills that can be overpowering and stuff that can be electric, he entered this season with a career mark of 9-9.

Bautista’s fortunes are on the upswing. After dominating SPC rival East Rowan 7-0 on Wednesday, he is 2-0 as a senior.

“East Rowan always has good hitters and they have good hitters again,” said Bautista, who lost to the Mustangs at Staton Field as a junior. “But it was a night when I felt very good, and everything was working. I kept it down and did my job. My last start (a no-decision against Carson) I struggled some, but I felt my rhythm come back tonight.”

Bautista struck out nine and fired a first-pitch strike to 15 hitters.  East Rowan coach Brian Hightower, who watched his team make seven errors, was looking for a pickle bucket to kick by the fourth inning.

“We had some good swings at Bautista in the first inning,” Hightower said. “But then he settled in and by the fourth you could see he had it all working and he was dominating. By then, I knew the only chance we had was to scratch a couple of runs and try to get him off the mound.”

But Bautista wasn’t going anywhere. The Mustangs (5-3, 4-2), who dropped out of a tie for first, put two men on with two outs in the fifth with an infield hit and a walk, but Bautista got a strikeout to end the inning.

“Omar’s two-seamer was really cutting in on them,” West Rowan catcher Lee Poteat said. “He was on.”

East Rowan hurler Joseph Peeler, who is headed to UNC Wilmington, fired lively fastballs, and it could’ve been 0-0 after five innings. But East Rowan’s defense faltered in West Rowan’s two-run second and struggled some more in the Falcons’ three-run fifth that put the game away.

“We had some double-play grounders we didn’t make plays on for Peeler,” Hightower said. “At East Rowan we usually turn double plays, but we just didn’t play well.”

Harrison Baucom drilled a run-scoring single in the fifth. Hunter Bernhardt keyed two insurance runs in the sixth for the Falcons when he tripled down the right-field line.

“Peeler was throwing hard like we expected,”  Bernhardt said. “We looked for the fastball and adjusted to the breaking ball, and we were able to put balls in play and score some runs.”

“Guys showed up to play,” West Rowan coach Seth Graham said. “We were able to put pressure on East’s defense with our speed and we capitalized on their mistakes. Omar was outstanding. He gave us momentum, and we kept it all the way.”