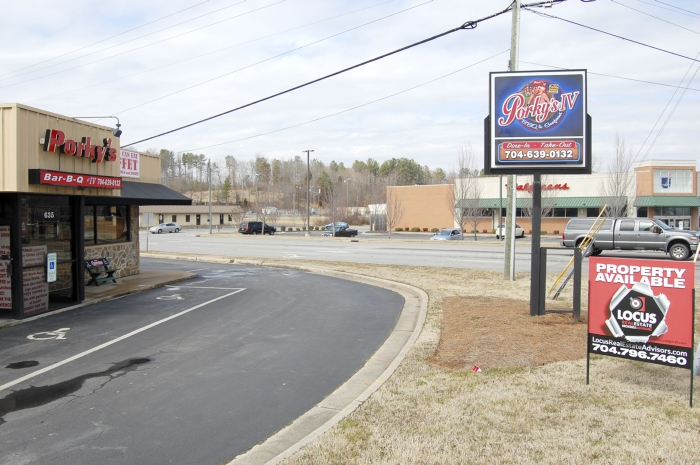 Porky's IV in Salisbury closed in February. It was located at the intersection of Lincolnton Road and Jake Alexander Boulevard. The owner said the restaurant wasn't doing the amout of business he wanted it to do.

Editor’s note: This story has been updated to show that Porky’s II in Landis is no longer open.

The expansion of a local barbecue chain has hit a snag.

The original Porky’s is in China Grove. Porky’s II in Landis closed late last summer. A Porky’s III, set for Spencer, was announced last year, but whether it will become a reality is up in the air.

Rick Register is the current owner of the restaurant in China Grove and was behind the expansion to Salisbury and Spencer.

Talking about why Porky’s IV closed, Register said, “We just weren’t doing the business we wanted to.”

He said the building in Salisbury needed to be bigger to accommodate more customers. Before Porky’s IV, Mario’s Diner was in the building.

Register said his lease on the building ends this month. A sign in the doorway at Porky’s IV urges people to go to Porky’s in China Grove.

Register and Joe Strickland, through Premier Development in Landis, bought most of the property at the plaza in Spencer in late 2013. Plans called for a Porky’s III to open last year in the plaza, but it hasn’t materialized.

A new Family Dollar store was built and is now open at the plaza, and Rowan Diagnostic Clinic opened a branch office there in February.

Register said a lot of factors are to blame for Porky’s III not opening, but he didn’t want to talk about the details. He said he wants to open a Porky’s in Spencer but is unsure if or when it will happen.

The original Porky’s opened in 1999, and at one point there were five locations: China Grove, Kannapolis, Rockwell, Taylorsville and a previous one in Salisbury.

The Taylorsville Porky’s is still open.