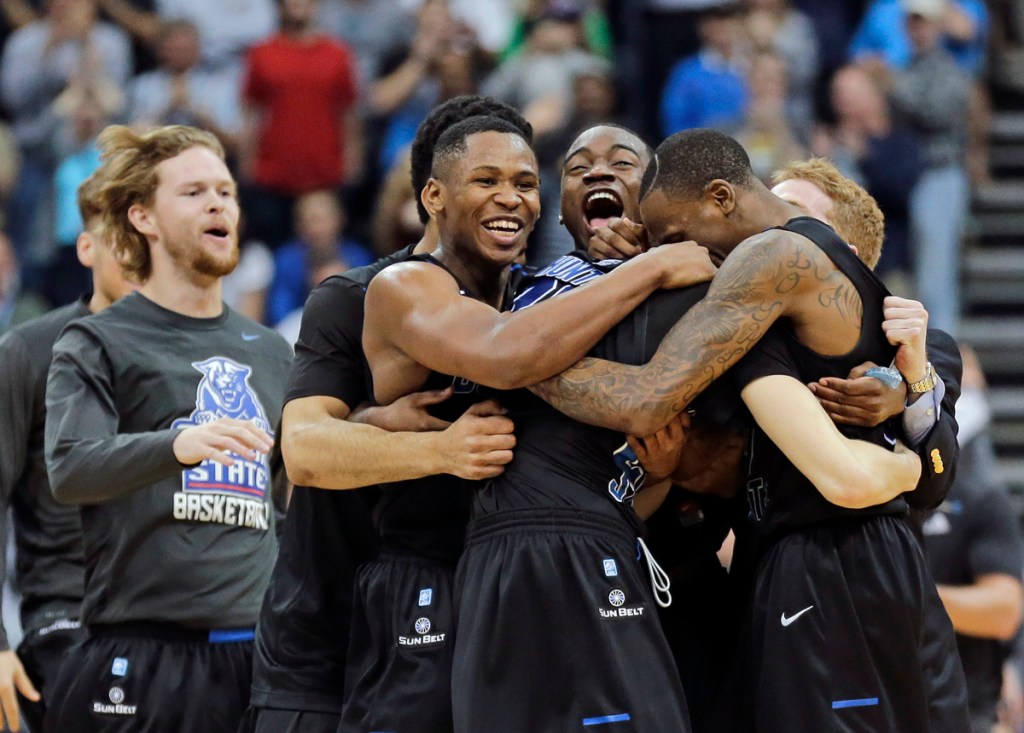 The Associated Press Georgia State players celebrate as they surround R.J. Hunter, center, after he made the game-winning shot against Baylor an NCAA tournament second-round college game Thursday in Jacksonville, Fla.

LOUISVILLE, Ky. (AP) — Two wins by No. 14 seeds. Two sons winning games for their father-coaches. The team nobody thought belonged in the field winning a game. The Big 12 starting 0-3.

Just another opening day of the NCAA Tournament.

Hunter’s 3-pointer with 2.7 seconds remaining capped a comeback from a 12-point deficit and lifted the 14th-seeded Panthers over the third-seeded Bears.

With Ron Hunter working the sideline in a rolling chair less than a week after tearing his left Achilles tendon celebrating Georgia State winning the Sun Belt Conference championship, R.J. shrugged off a poor shooting performance to come through when his team needed him most.

Hunter’s steal and layup trimmed Baylor’s lead to 56-53, and he drained an NBA-range 3 for the win.

William Lee scored the last four points for the 14th-seeded Blazers in their upset win Thursday.

It was the program’s first tournament win in a decade.

Robert Brown had 21 points and Lee finished with 14 points and 12 rebounds for the Blazers.

Bryce Alford made four 3-pointers in the final 3:40, his last on a rare goaltending call with 13 seconds remaining, to push 11th-seeded UCLA to the upset.

His last attempt was the most debated as his shot from the left side was hit by SMU’s Yanick Moreira before it reached the rim. Officials awarded Alford, the son of coach Steve Alford, the basket, to the disbelief of SMU players and coach Larry Brown.

The third-seeded Fighting Irish (30-5) returned to the tournament after a one-year absence.

With a chance to tie it at 67-all with less than 10 seconds left, Quincy Ford lost control of the ball — and the Huskies lost their chance at pulling off the shocker.

Jonathan Holmes led the Longhorns with 15 points and Isaiah Taylor added 14 but Texas shot just 34 percent from the field and turned it over 15 times.

PORTLAND, Ore. (AP) — Rondae Hollis-Jefferson had 23 points, 16 in the first half, along with 10 rebounds for second-seeded Arizona.

The Bearcats trailed by seven with 48.5 seconds left in regulation and forced overtime with a 10-3 run. Caupain’s driving layup banked off the glass, rolled around and hit the glass again — staying on the back rim for a moment — before falling through. That sent the Bearcats celebrating while officials reviewed the play to make sure Caupain did beat the buzzer.

Vince Edwards’ would-be tying 3 hit off the rim at the buzzer for the Boilermakers (21-13).

The Bearcats (23-10) will play either No. 1 Kentucky or Hampton on Saturday in the Midwest Region.

Thirty years after stunning the basketball world with an improbable national championship, the Wildcats (33-2) are going to try it this time around as a prohibitive favorite to reach the Final Four.

Dylan Ennis scored 16 points and helped the Wildcats win their 16th straight game. Up next on Saturday, the winner of N.C. State-LSU.

The Big East champion Wildcats shot close to 70 percent for most of the game as they cruised to a lead of more than 30 points.