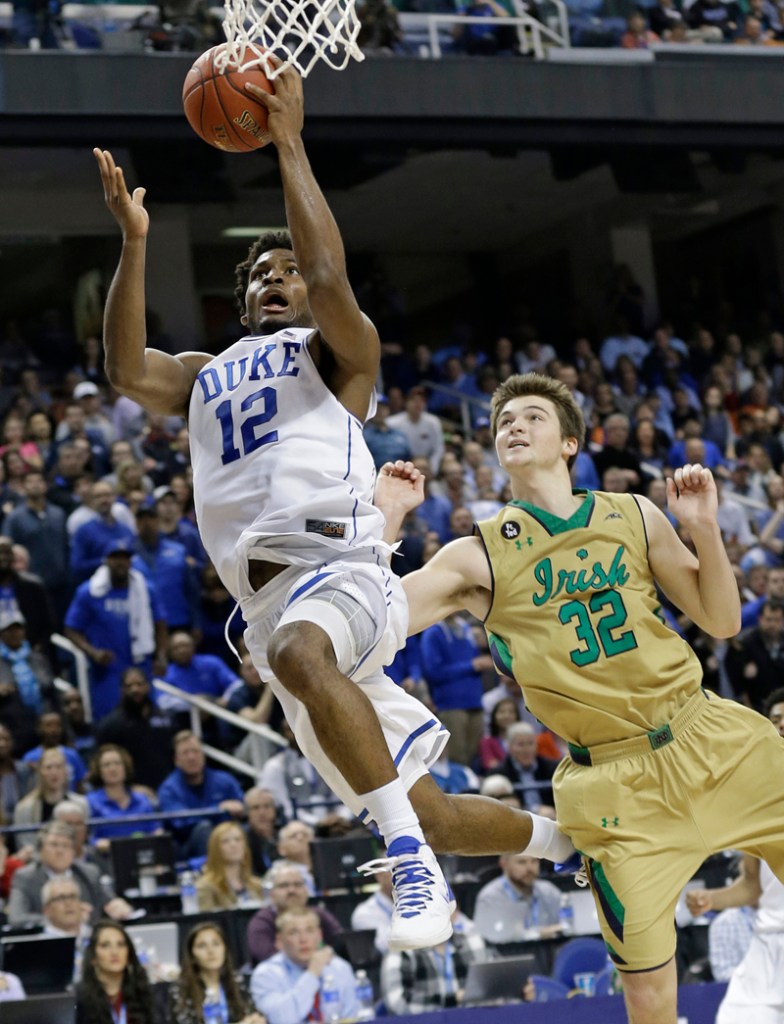 The Associated Press In this March 13, 2015, file photo, Duke's Justise Winslow (12) drives past Notre Dame's Steve Vasturia (32) in the semifinals of the Atlantic Coast Conference tournament in Greensboro. The four freshmen on this yearÕs top-seeded Blue Devils (29-4) squad are eager to create their own postseason legacy when they make their NCAA Tournament debuts on Friday night in Charlotte in South Region play against the winner of the North Florida-Robert Morris matchup.

DURHAM, N.C. (AP) — All these Duke freshmen want to write their own histories.

They weren’t around to hang those four national championship banners at Cameron Indoor Stadium. They also had nothing to do with those stunning early round losses to Lehigh and Mercer.

No, the four freshmen on this year’s top-seeded Blue Devils (29-4) squad are eager to create their own postseason legacy when they make their NCAA Tournament debuts on Friday night in Charlotte in South Region play against the winner of the North Florida-Robert Morris matchup.

“You’re always remembered if you win,” freshman guard Tyus Jones said. “That’s the most important thing — we all want to be remembered for hanging a banner, a fifth banner.”

Duke is the only team in the nation to have three freshmen averaging double figures, and leading the way is Jahlil Okafor — a serious national player of the year candidate and the first freshman to win the Atlantic Coast Conference player of the year award.

Okafor averages 17.7 points and nine rebounds, and has reach double figures in scoring in all but one game of his college career. Justise Winslow adds 12.3 points and Jones averages 11.6 points.

And reserve Grayson Allen has come on lately, scoring double figures in two of his last four games including a season-high 27 in just 24 minutes against Wake Forest.

The Okafor-Jones-Winslow trio has been in Duke’s starting lineup 32 times.

Together, those three are bidding to become the highest-scoring trio of freshmen in program history, and just the third in ACC history to each average double figures.

Yet there’s an inherent danger for Duke, which in recently has gone one-and-out in the NCAA Tournament with one-and-done NBA talent.

But the current freshmen already put together a long list of impressive wins away from Cameron: at Wisconsin, at North Carolina, at Virginia, at Louisville.

And now they’re focused on hanging a banner of their own in those crowded rafters at Duke.

When the team gathered Sunday night to watch the selection show, coach Mike Krzyzewski said the freshmen cheered loudly and Jones and Okafor hugged to celebrate their place in the bracket.