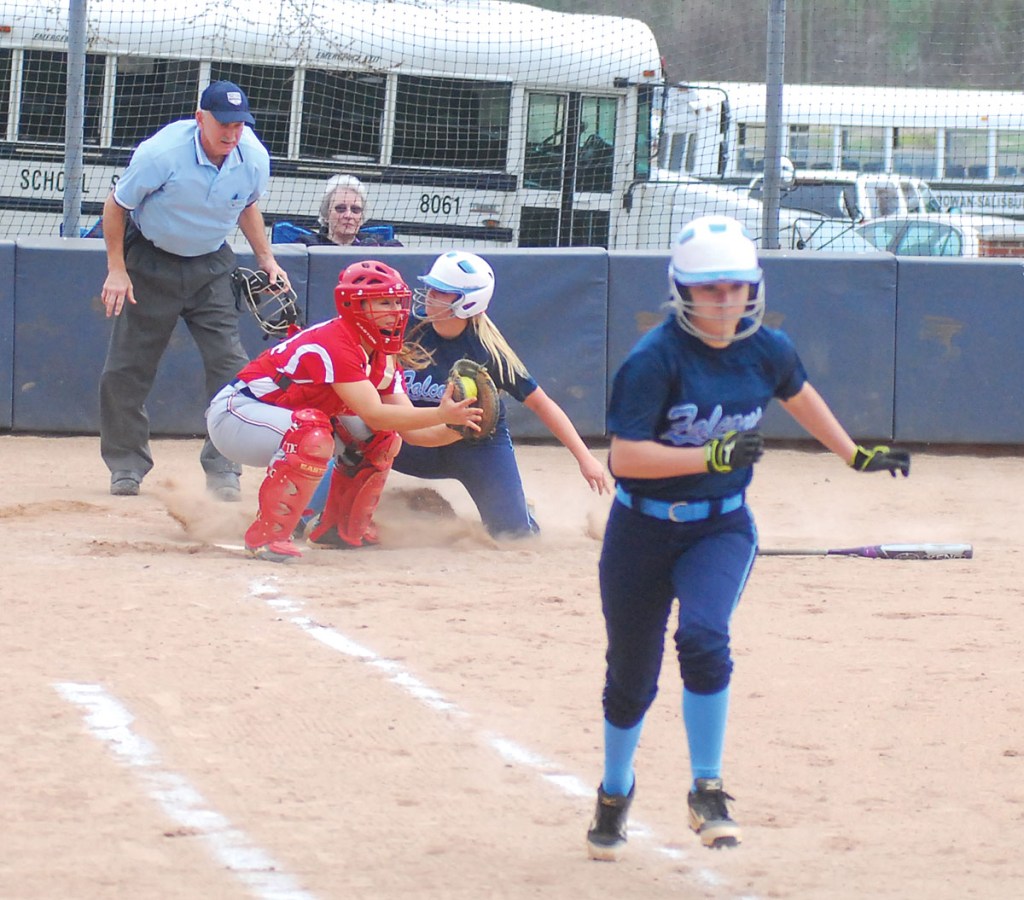 ADAM HOUSTON/THE SALISBURY POST West Rowan's Hunter Gibbons beats the throw home on a fielder's choice by Kyra Fesperman (running) before East Rowan's Kaliegh Troutman can turn around to apply the tag. The Falcons defeated the Mustangs 21-8 in a South Piedmont Conference game in Mount Ulla.

Fifteen of the 20 batters West Rowan sent to the plate in the bottom of the second inning touched home to catapult the Falcons to a 21-8 victory over the Mustangs in a game that ended in the fifth inning.

“When everyone comes into sync, it’s just one after the other,” West Rowan pitcher Peyton Greene said. “Hitting’s contagious you know. Anything positive. It’s follow the leader and, hopefully, everyone comes together.”

Already up 3-0 on Greene’s three-run home run to deep right-center in the bottom of the first inning, West Rowan got the inning started with a lead-off single by Morgan Corriher. She scored on Taylor Martin’s two-RBI double to left field.

Hunter Gibbons, Marissa Yow, Greene and Camryn Nooner all had two hits in the inning. Martin collected four RBIs — picking up two more on a fielder’s choice that scored Corriher and Savannah Cline for a 13-0 lead — in the inning.

Parker Greene’s one-out triple to the corner in right field plated two more runs. The Flacons got the final three runs of the inning on singles by Yow and Greene and when Greene scored after a two-out throwing error by East Rowan catcher Kaleigh Troutman that would have ended the inning.

It was finally over when Savannah Cline hit a groundball back to pitcher Caroline Johnson for the final out of the inning.

Gibbons and Yow ended the game a perfect 4-for-4 from the plate. Gibbons scored two runs and batted in two more. Yow had two doubles, and courtesy runner Victoria Moore scored three runs running for Yow.

Mustangs pitcher Anna Shafer lasted only 1-1/3 innings. The Falcons got her for 14 runs on 11 hits and two walks.

East Rowan coach Mike Waddell said the Mustangs had not had an inning like that this year and it is not something he is worried about.

“Sometimes a team starts swinging the bats freely and things start falling in and everything,” Waddell said. “Sometimes the snowballs start, and you can’t stop it.”

Peyton Greene started in the circle for the Falcons (6-1, 5-0 SPC) in their bid to stay unbeaten in league play. She allowed one hit, struck out two and walked two in two innings of work.

Nooner, a freshman, pitched the final three innings of the game. She allowed eight runs on nine hits with three walks.

“She is my favorite little prodigy,” Peyton Greene said. “When she comes in, she’s got to have that confidence up. She’s just coming in, and she’s going to close out the game, and she just had to know she had to do it.”

East Rowan did not pack it in after the disastrous second inning. The Mustangs put up six runs in the top of the third. Shelby Benge and Coryn Saul smacked back-to-back two-RBI doubles to get four runs on the board. Three batters later, Lara Drew followed suit with her own two-RBI double.

Saul was 2-for-2 with a double, a walk and three RBIs. McKenzie Eller also had a team-high two hits, and she scored two runs.