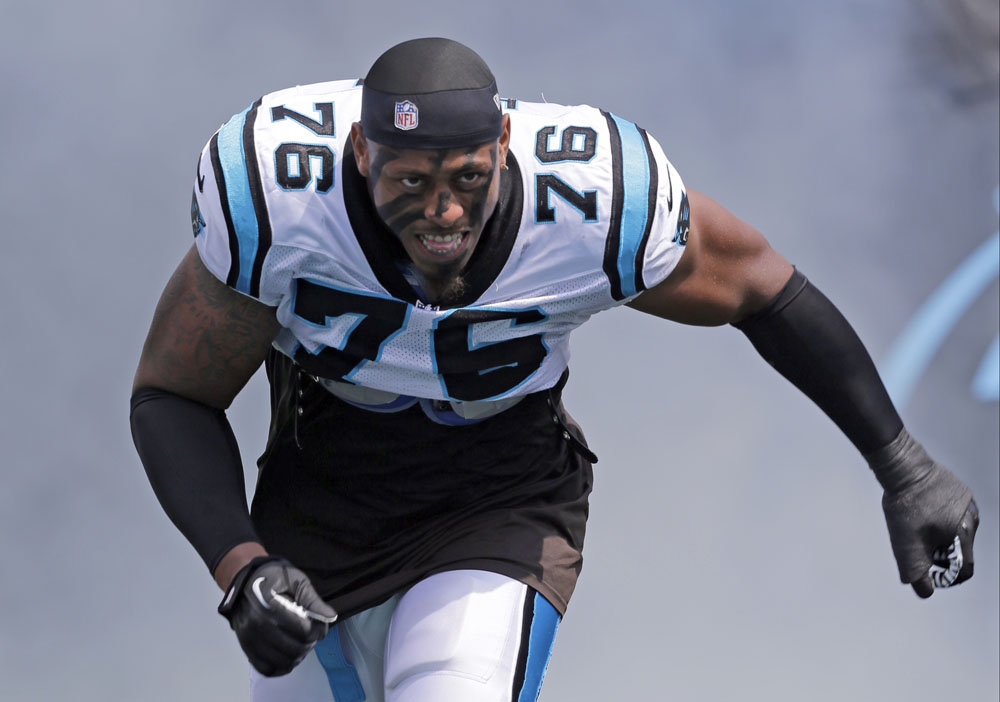 The Associated Press Greg Hardy is introduced before a Carolina Panthers home game against the Seatle Seahawks in September 2013. The Dallas Cowboys signed the free agent defensive end to a one-year, $11 million contract with incentives on Wednesday.

IRVING, Texas (AP) — The Dallas Cowboys have made their big play in free agency with defensive end Greg Hardy.

Although Hardy could face a league suspension for violating the NFL’s domestic conduct policy, the team said it agreed to terms with the former Carolina Panther on Wednesday.

A person with knowledge of the contract tells The Associated Press it is a one-year deal that could earn him $13.1 million if he meets incentives. The person spoke on condition of anonymity because terms of the deal were not announced.

The Cowboys let DeMarco Murray go to NFC East rival Philadelphia because they decided the NFL rushing champion was too expensive. Now, they’ve bolstered the defense, particularly the pass rush.

Hardy remains on the commissioner’s exempt list as he seeks reinstatement by the NFL, which filed a lawsuit Wednesday seeking the release of records from the trial that led to Hardy’s conviction by a judge in North Carolina on domestic violence charges. The case was dismissed after Hardy requested a jury trial and his accuser couldn’t be located to testify.

The league is seeking the evidence through an open records request after prosecutors refused to release anything. Without the evidence, it could be difficult for the NFL to enforce a tougher personal-conduct policy approved by owners after Hardy’s conviction.

The 26-year-old Hardy played just one game last season while his case was still in the courts after tying a Carolina franchise record with 15 sacks in 2013. He made $13.1 million in 2014 as Carolina’s franchise player.

NFL officials met with Hardy earlier this month to discuss the case. His ex-girlfriend testified that Hardy threw her around and threatened to kill her, and he denied those allegations.

The Cowboys were 28th in the NFL in sacks with 28 last year. Jeremy Mincey, a low-cost defensive end added in free agency last year, led Dallas with six sacks and is returning. Tackle Henry Melton, who had five sacks despite battling injuries, signed with Tampa Bay.

Dallas moved up in the second round of the 2014 draft to grab DeMarcus Lawrence after cutting franchise sacks leader DeMarcus Ware in a salary cap move. But Lawrence missed the first half of the season after breaking his foot in training camp.

It’s the second time in four years the Cowboys made a big move for their defense in free agency. They added cornerback Brandon Carr on a $50 million deal in 2012, and could release him if he doesn’t accept a pay cut after going without an interception for the first time in his seven-year career.

The Cowboys also hope to re-sign linebacker Rolando McClain, a former top 10 pick by Oakland who returned after a year away from the game to have a solid first season in Dallas.