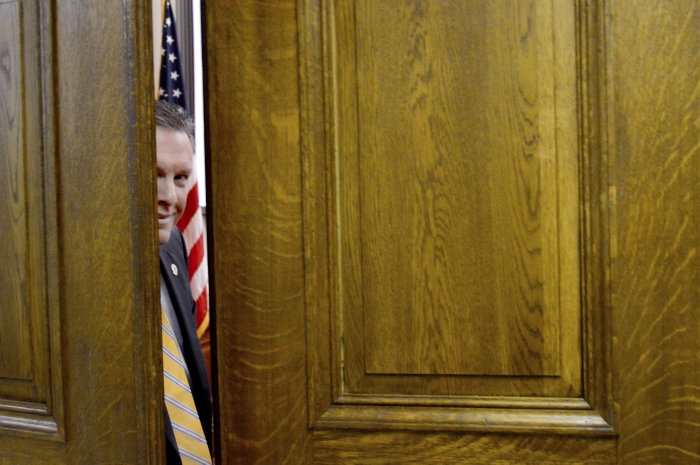 Josh Bergeron / Salisbury Post - County Commissioner Chairman Greg Edds peers out from behind a door as the board goes into closed session on Monday.

Editor’s note: March 15 to 21 is Sunshine Week, which focuses on access to public information and what it means for society.

When it’s time for elected boards to discuss a controversial personnel issue or a pending deal with an incoming company, the routine is clear.

Audience members clear out of meeting rooms and doors close, leaving the discussion too faint to discern. Some boards go into a smaller conference room. Exact details of discussions, in some cases, remain private for years before closed session minutes are made public. Some details are never revealed. Faith is the only municipality in Rowan that doesn’t keep closed session minutes of any kind, according to its staff.

When any lingering attendees are allowed back into the meeting room, there’s usually one motion to be made — adjournment.

Closed sessions are used by municipal, county and school board members to have private discussion on a set of legally allowed issues. Small town boards in Rowan invoke state statutes for closed sessions, on average, less frequently than ones that represent a large constituent base, including the Rowan-Salisbury Board of Education. The Rowan County Board of Commissioners, for example, has scheduled a closed session for nearly every meeting in recent months.

Discussions during a closed session can be, and sometimes are, more comprehensive than what the members of the general public are able to hear, said County Attorney Jay Dees.

“You don’t have to worry about the way it’s going to be perceived or whether the information is correct or incorrect,” Dees said. “It’s designed to promote an open and flowing discussion.”

He said the tone of speech inside of closed sessions doesn’t typically change, but questions can be more direct than in open portions of meetings.

“It’s kind of hard to compare, because these are topics you’re not used to discussing in public,” Dees said.

For the right reasons

The law is clear — elected boards, such as the Rowan County commissioners or Salisbury City Council can only go into closed session for certain reasons.

Reasons allowed by the North Carolina Open Meetings Law to call a closed session include: preventing disclosure of privileged information, premature disclosure of an honorary degree or award, discussing the location or expansion of industries or businesses, negotiating terms of a contract or the amount of an employee’s compensation, considering qualifications and performance of an employee, alleged criminal misconduct and public safety.

Attorney-client privilege is also a legally allowed reason to enter a closed session, but general policy matters cannot be discussed, according to the state’s open meetings law.

Public officials from around Rowan cite closed sessions as a necessary part of government. Property purchases and personnel matters are among the most frequently cited reasons for going into closed sessions.

“Anytime government is going to buy something, the price immediately goes up,” said Salisbury Mayor Paul Woodson. “If it gets out openly, the price will double the next day.”

The most high profile closed sessions in recent years for the city of Salisbury include the mutual contract termination of former city manager Doug Paris and the hiring of Lane Bailey, the city’s incoming manager.

The Rowan County Board of Commissioners held closed sessions prior to the $3.4-million purchase of the former Salisbury Mall, the hiring of current County Manager Aaron Church and obtaining a government services permit for the former mall.

Certain discussions in closed sessions are required by state law to eventually be publicly released, identical to a board’s minutes. The minutes can remain private as long as public inspection would “frustrate the purpose of a closed session.” Personnel issues are among those allowed by state law to remain private forever. However, Dees said workers’ compensation claims do become public once a settlement is reached.

During open portions of government meetings, a board clerk records minutes, usually approved and released one or two meetings afterward.

When boards go into closed session, a similar procedure is required by the state’s open meetings law, which reads: “Every public body shall keep full and accurate minutes of all official meetings, including any closed sessions.” The law allows official records to be video, audio or a written narrative.

Bringle referred any questions about closed sessions to the town’s attorney Tom Brooke, who was not available for comment on Tuesday.

“Every city, county and town can interpret (the law) as they choose within reason,” Locklear said. “If the notes that Reed takes are sufficient enough to allow the board to pick back up and begin discussion, I think it follows the law.”

Conversely, North Carolina Press Association Attorney Amanda Martin said the notes should be more detailed than a regular account of a meeting because of their private nature.

Linn said the notes would be available for public viewing in an identical manner to other forms of closed session records.

Closed session minutes may be approved one meeting later, but the privacy all depends on pending issues. A public announcement of the decision made in closed session likewise can take several months. However, a formal vote cannot be taken in private.

For example, a retail development at Summit Corporate Center, announced late last year, was discussed in closed session on April 7, 2014. Construction on the retail complex began a few months ago. One of the first discussions about county government purchasing the former Salisbury Mall occurred during a closed session on Sept. 3, 2013, when commissioners mentioned the mall’s opening bid was $1.5 million and said the facility would be ideal for locating county departments. The mall’s purchase didn’t occur until December 2013. Mediation between the Rowan-Salisbury school board and county government is likewise detailed in the closed session minutes.

“If they’re still subject to the closed session for whatever reason, then they’re not released,” he said. “We had closed sessions on the purchase of the mall. Once we closed and purchased the mall, those minutes became public.”

The city of Salisbury, alternatively, reviews the privacy of closed session minutes following a request.

This story has been updated to reflect the fact that China Grove’s town board does keep closed session minutes.