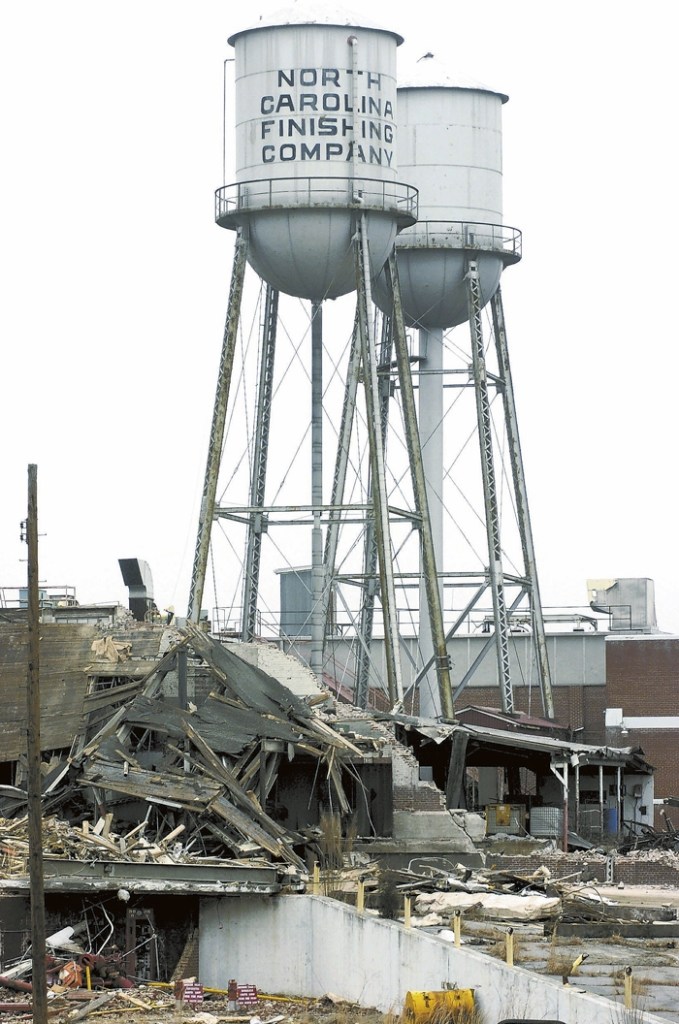 Wayne Hinshaw/Salisbury Post F.C. Development Co. was to salvage materials from the old N.C. Finishing building, known as Color-Tex when it closed in 2000. The water towers are still standing.

The plans David Risdon had for High Rock Raceway sounded too good to be true. And, in the end, they were.

He talked of luxury condos, retail development and, most important, a two-mile race course on the banks of the Yadkin River. Ten years after Risdon unveiled his grand plan, none of it has materialized.

What’s left is a big pile of bricks and debris — and perhaps an opportunity.

After Risdon lost the land on which he planned to build this dream, the former Color-Tex property on the northern edge of Spencer, he left behind an eyesore and a cautionary tale. Dreaming up a big development shows gumption and creativity, but that kind of vision is of little use without the capital to make things happen.

The town of Spencer did what it could to help the project along by annexing part of the property. Now that the raceway dream has died, Mayor Jody Everhart still feels a commitment and has made cleaning up the site a priority, one he intends to push at a League of Municipalities Town Hall Day in Raleigh this week.   The town cannot and would not pay to have this done. But Spencer officials can help push for some kind of resolution to the demolition project that Risdon left partially done. Anyone who enters Rowan County and Spencer at that point sees a big mess that’s not at all representative of the county.

And what can’t be seen — water and soil contamination from decades of industrial production — could be even more problematic.

It’s tempting to say the Color-Tex site is a disaster with no resolution in sight. But other visionaries with better financial footing could yet do something with the 240-acre tract. The property has an ample water supply and access to both an interstate highway and railroad tracks. Donald Rand, who bought the property for $25,525, says he and his partners see it as an economic-development opportunity. The community looks forward to hearing more details and once again being able to take pride in this special site.