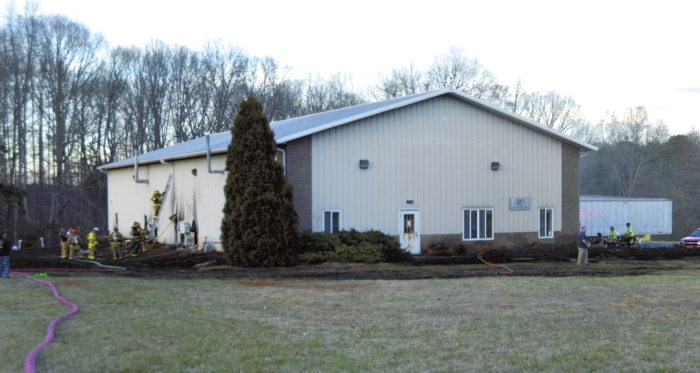 A grass fire spread to the exterior walls of Select Bakery on Palmer Road in Rockwell. The fire was contained and did not spread any further.

The fire began as a grass fire that spread into exterior walls of Select Bakery at 607 Palmer Road, near Viscount Road. The initial call to 911 came in at 6:54 p.m. The bakery was closed and no one was there at the time.

The fire was contained in the walls said Rockwell City Fire Chief Alan Shinn and did not spread any further. Firefighters had to cut into the exterior metal walls in order to make sure the fire was extinguished.

He said the fire got into the wood at the base of the building and into the metal walls.

“We don’t know yet how it started,” Shinn said.

The Rowan County Fire Marshal’s Office was called in to investigate. No injuries were reported.

The business is surrounded by several homes where many homeowners stood in their yards to watch as firefighters extinguished the fire.