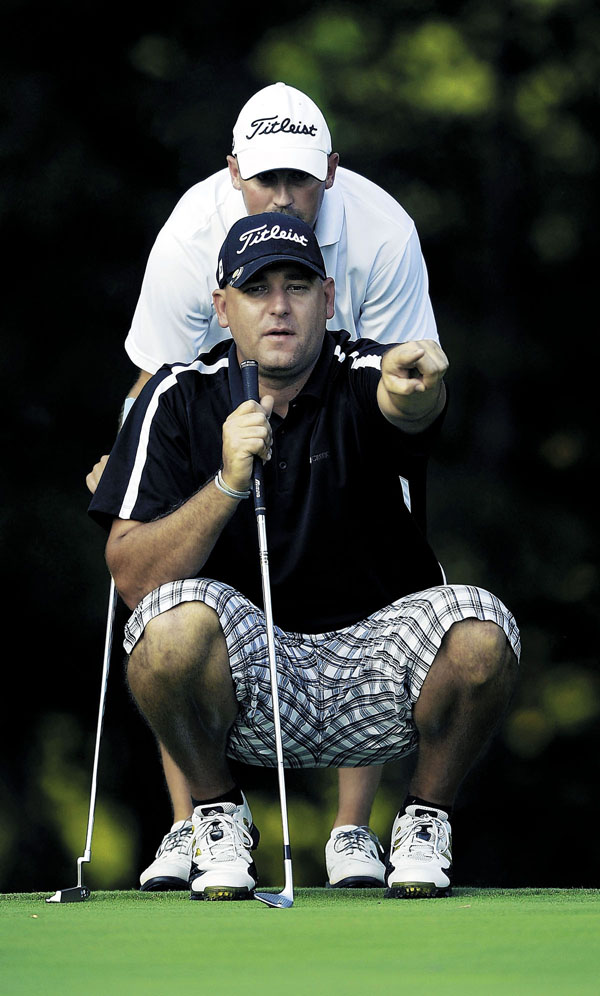 FIle photo by Wayne Hinshaw/The Salisbury Post The four-ball team of Ken Clarke (squatting) and Chris Owen (behind) read a putt in the 2009 Goode Crowder Memorial Four-Ball Tournament. Clarke and Owen travel to Pinehurst this weekend attempting to qualify for the inaugural U.S. Amateur Four-Ball Championship.

The Clarke-Owen team has a challenging outing scheduled for March 23 at Pinewild Country Club in Pinehurst. They expect to compete at a high level as well as have a barrel of fun.

“This will be the hardest thing we’ve ever done with golf,” Clarke said. “But, man, it’s nice to have the opportunity.”

The event is a sectional qualifier for the inaugural U.S. Amateur Four-Ball Championship. Pinewild Country Club’s Holly Course is one of 51 qualifying sites and the only one in North Carolina.

The United States Golf Association accepted entries from 2,234 two-man teams. Only 128 teams — 5.7 percent of the entries — will advance to national competition at The Olympic Club in San Francisco on May 2-6. The national competition will involve 36 holes of qualifying stroke play to pare the field to 32 elite teams, followed by match play.

It’s not like anyone could sign up. A handicap of 5.4 or lower was required when Clarke and Owen registered in August. Warrior pro Brian Lee certified the stroke averages of Owen and Clarke.

“Brian felt we could do well if we committed the time, effort and money,” Clarke said. “I know we can qualify, but that doesn’t mean we will qualify. Every team will be good. It’ll come down to who’s on, on that particular day.”

The sectional qualifier is 18 holes of stroke play, with only the better score for Clarke and Owen recorded on each hole. Successful qualifiers at various sites are shooting mid-60s.

Owen, 39, and Clarke, 40 were a year apart at West Rowan High. The 6-foot-5 Clarke was Rowan County Basketball Player of the Year as a senior in 1993.  Owen’s sport was baseball.

Clarke continued his hoops career at Lees-McRae, where the basketball and golf coach was former West Rowan coach Jack Lytton.

“I was a very average golfer,” Clarke said. “Coach Lytton asked me what I shot and I told him around 90. He let me practice and play some rounds with the team, and I started practicing anytime it wasn’t snowing. By my senior year, I was shooting low 70s, with the occasional 69.”

Owen’s story is even more unlikely.

“I picked up a club for the first time when I was 21,” Owen said. “My wife told me I needed to get out of the house more, so I started playing. By the time I was 25 I was playing more, but I was playing with good players and getting my butt kicked. That’s when I got the bug to get better and started playing a lot.

Owen, like Clarke, is an extrovert with a sense of humor. They became a team by accident.

“We hadn’t seen each other in years, but then we were both playing in the church basketball league at the old Salisbury Y,” Owen said. “That’s when we started talking golf.”

They paired up as a Four-Ball team for the first time in 2007. In 2009, they lost the final in the Championship Flight in the Country Club of Salisbury’s prestigious Labor Day tournament. In 2012, they triumphed in the Labor Day event.

Clarke and Owen have compatible temperaments.

“We don’t get angry,” Clarke said. “We’re both competitors, but we’ll also say ‘Nice shot,’ when the guys we’re playing against make one.”

“Chris is a very good ball striker, he hits it in play, and he can putt,” Clarke said. “That allows me to take a few chances and try to make some birdies.”

On March 21, Clarke and Owen will play a practice round at Pinewild.

“With a gift card we won in a tournament,” Owen said.

When the serious round starts March 23, Clarke and Owen will have the moral support and physical assistance of friends Carl Moore Jr. and Josh Brincefield. Golfers must walk the qualifying round and either carry their bag or furnish their own caddies. Moore and Brincefield volunteered their services.

Clarke and Owen will head to Pinehurst eager to represent Rowan County in a history-making event.

“There are so many great golfers here, and we feel fortunate that it’s us,” Clarke said. “We’ll cut up a little bit, but we’re going down there to compete.”