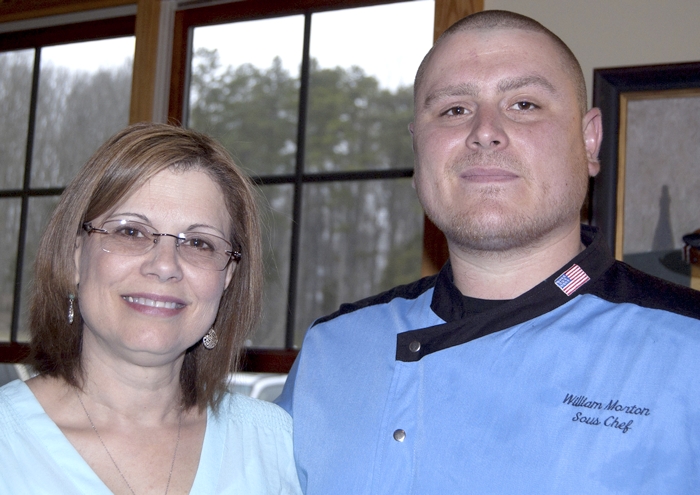 When 90 percent of the diners at your specially created dinner are family, that’s pressure.

It’s also greatly reassuring that all those people are cheering you on.

Seth Morton, sous chef at Morgan Ridge Vineyards, lost his best friend in 2013, his father, who suffered from diabetes and severe kidney disease. To honor him, he created a meal featuring Scottish-themed food.

“i’m so proud of him,” his mother, Teresa Morton, said at the dinner. “His dad would be so proud. He’s a big part of why Seth loves cooking.”

Both Seth and Teresa were there when father and husband Todd Morton died. It was a terrible scene neither will forget, even though Seth can talk about it now without breaking down. Todd Morton was just 52. He had been a commercial fisherman, a hunter, a contractor, a best buddy to his own sons and his father.

Teresa, who donated one of her kidneys to Todd, explained that once Seth started bussing tables, at 12 or 13, he took to the kitchen immediately. The chef even let him help cook on weekends.

“We sent him to (the University of North Carolina at) Pembroke for criminal justice. … I woke up one morning and said, I guess he wants to be a chef. He should do what he wants.”

She says he has great rapport with people. Seth has never met a stranger. He’s polite, respectful and hungry to talk about his family and his food.

Morgan Ridge Chef Jason Nain had worked with Seth elsewhere, and when he needed help at the vineyard, he gave Seth a call.

“I needed some help and we worked pretty well together. He’s got the passion for food,” Nain says. “I want to feed that passion.”

Preparing the four-course meal on Friday the 13th, the two talk back and forth in kitchen-language, calling out orders, asking for plates, setting up service. There’s no tension. Seth is in charge, while Jason acts as sous chef, taking orders from his friend.

Several people are doing what Seth tells them, from cutting Brussels sprouts to wrapping scallops with a slice of fish to ladling up Douglas Cullen Skink Soup — tattie, onion and haddock. Tattie is a Scottish word for potato, like our tater. Haddock is a popular firm white fish. The soup is exceptional, rich and full of flavor.

Seth shows Morgan Ridge employees how he wants the salad to look, mixed greens, cucumber ribbons, salmon smoked with pastrami spices, a little Cheshire Honey-Lemon dressing and tobacco onions. And there’s dill Chevre, a goat cheese. The original Mortons, part of the Douglas clan, once lived in Cheshire. The salmon is soft and spicy and pairs well with the onions.

Diners are ordering other appetizers, too, such as a dozen oysters on the half-shell. Seth cleans the oysters before popping them open, once getting his thumb with the oyster knife. He bandages it, puts on a glove and moves on.

Diners come in at different times, so the courses are assembled again and again. The appetizer, a Scotch egg, looks pretty on a plate with an herb sauce and some arugula. It’s a hard boiled egg, wrapped in sausage, lightly breaded and deep fried. They’re served slightly warm, with a piece of pig skin from an earlier pork belly cooking stuck in the yolk. The Scotch egg is a popular bar and picnic food in Scotland.

The entrees are scallops wrapped in a piece of sea bass, leg of lamb or a steak. The scallops and fish make a beautiful presentation, served with a beurre blanc, Brussels sprouts and roasted tatties and root vegetables.

The lamb is pink and smothered with a roasted red pepper and portabella salsa. But the best part is the chocolate infused aged balsamic vinegar sauce. Lamb is often eaten in the Scotland, where many farmers raise sheep.

When someone orders a well-done steak, Jason removes his cap and he and Seth bow their heads for a moment of silence.

Seth is calm and collected throughout, though not cool in the hot kitchen. He says ‘Yes, Ma’am” and “Yes, Sir.” He calls women Miss..

In the dining room are his wife, Jana, mother Teresa, family and friends. His father’s parents, Roger and Pat Morton, are up from Holden Beach. “His Daddy would be so proud — I’m so proud,” his grandmother says. This is the grandfather that father Todd and Seth went fishing with.

His aunt, Amy Morton, says Seth was always serious, and his dedication to cooking shows it.

Seth’s mother says nothing about Seth is put on. “He’s real. He’s the same everywhere. … He’s my baby.”

For dessert, Seth has made shortbread, and is topping it with cream whipped with whiskey and honey. He sprinkles on cranachan, oatmeal toasted and soaked in whiskey, and two raspberry halves.

Seth and Jana moved in with his mother so all of them could recover together. Teresa Morton teaches sixth grade. Jana works in the hospitality industry and wants to go back to school.

Jason and Seth say they learn from each other, that they compliment each other in the kitchen. Seth says he was surprised when Jason told him he could create the dinner.

When most of the kitchen work is over, Seth, smiling broadly, puts on the kilt that once belonged to his father and goes into the dining room for hugs and laughs. He’s a happy man looking forward to a future of making other people happy.