Duke gets No. 1 seed, opens in Charlotte 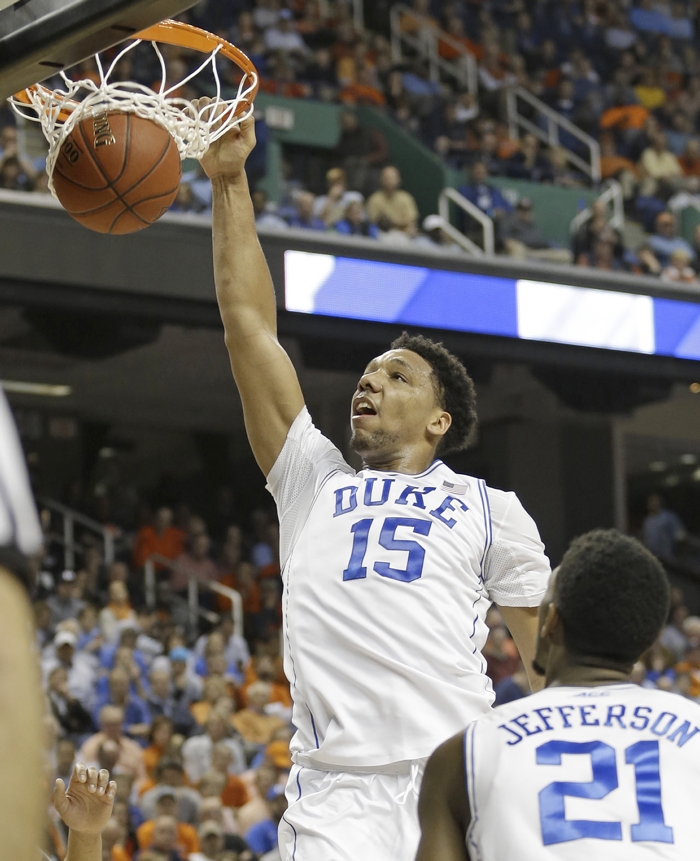 Duke's Jahlil Okafor (15) dunks against Notre Dame during the first half of an NCAA college basketball game in the semifinals of the Atlantic Coast Conference tournament in Greensboro, N.C., Friday, March 13, 2015. (AP Photo/Bob Leverone)

CHARLOTTE (AP) — Duke has earned the top seed in the South Region.

The Blue Devils (29-4) will play their NCAA Tournament opener Friday in Charlotte against the winner of a First Four matchup between North Florida and Robert Morris.

Duke is making its 20th straight NCAA Tournament appearance and is chasing its fifth national title and 12th berth in the Final Four under coach Mike Krzyzewski. The Blue Devils finished second in the Atlantic Coast Conference and lost to Notre Dame in the ACC Tournament semifinals.

Notre Dame earned a No. 3 seed in the Midwest Region of the NCAA Tournament and a date with Northeastern on Thursday in Pittsburgh.

The Fighting Irish (29-5) were awarded a No. 3 seed — the only non-Big 12 team to get one — after beating Duke and North Carolina on back-to-back nights to win the ACC Tournament title.

Notre Dame is one of the nation’s highest-scoring teams, averaging 78.8 points per game.

The Kentucky Wildcats ended up where everyone expected them on Selection Sunday: Seeded No. 1 on their quest to become the first undefeated team since 1976.

Oh, but there were surprises when the bracket came out, too.

Big-conference UCLA and Texas made it. Colorado State and Temple did not.

Wisconsin is a No. 1 seed for the first time in program history. But the Badgers must play in the West Region, where second-seeded Arizona is certain to draw more fans.

As for those play-in games Tuesday and Wednesday in Dayton. Well, one of the teams playing is Dayton — a No. 11 seed that will have a distinct home-court advantage against Boise State. Generally, that’s not allowed during the tournament, but there’s an exception because the committee said the Flyers were the last team in, and thus, had to play in the opening-round game.

“It falls within our policies and procedures,” selection committee chairman Scott Barnes said. “It’s obviously a home-court advantage but we didn’t waver from that decision.”

The action starts in full on Thursday, when Kentucky headlines the action against the winner of a play-in game between No. 16 seeds Manhattan and Hampton. A ‘1’ has never lost to a ‘16.’

The other No. 1 seeds were Villanova in the East and Duke in the South. Those were pretty easy picks.

And then there was the total no-brainer — placing Kentucky at the very top of the bracket. The Wildcats defeated Arkansas 78-63 on Sunday to improve to 34-0. If they win six more, they’ll become the first team since then 1975-76 Indiana Hoosiers to go undefeated.

“I think I have the best team and the best players,” said coach John Calipari, trying to lead the Wildcats to their ninth national title. “Does that mean we’ll win? No, it doesn’t.”

Barnes called the UCLA pick “one of the tougher decisions we had to make.” But he defended putting the Bruins (20-13) in the bracket despite an RPI of 48, which is 18 spots lower than Colorado State.

“We felt they were gaining steam,” Barnes said. “They did have a good strength-of-schedule, they were playing better against tough competition. An example is the last game against Arizona (a 70-64 loss in the Pac-12 title game). I think the “eye test” was also a plus in putting them in the field.”

The Big Ten and Big 12 led the way by placing seven teams each in the bracket.

Other teams that just missed were Old Dominion and Richmond, which lost out to teams like Ole Miss and Texas that have stronger schedules baked into the cake because they play in major conferences.

As is custom, Barnes was short on specifics, though he said Wyoming’s surprise victory in the Mountain West Conference stole away an at-large bid that would’ve gone to Temple.

The 68-team bracket includes its usual share of quirks and tear-jerkers.

—Georgia State coach Ron Hunter watched the bracket unveiling with his left foot in a cast. He tore his Achilles’ tendon while celebrating his program’s first trip to the tournament since 2001.

The 14th-seeded Panthers open against Baylor.

—Also seeded No. 14 is Albany, which made the tournament on a 3-pointer with 1 second left by Peter Hooley, whose mother died six weeks ago. No. 14 Albany opens against Oklahoma State.