You’re going to like the authors at Rowan Reading Rendezvous 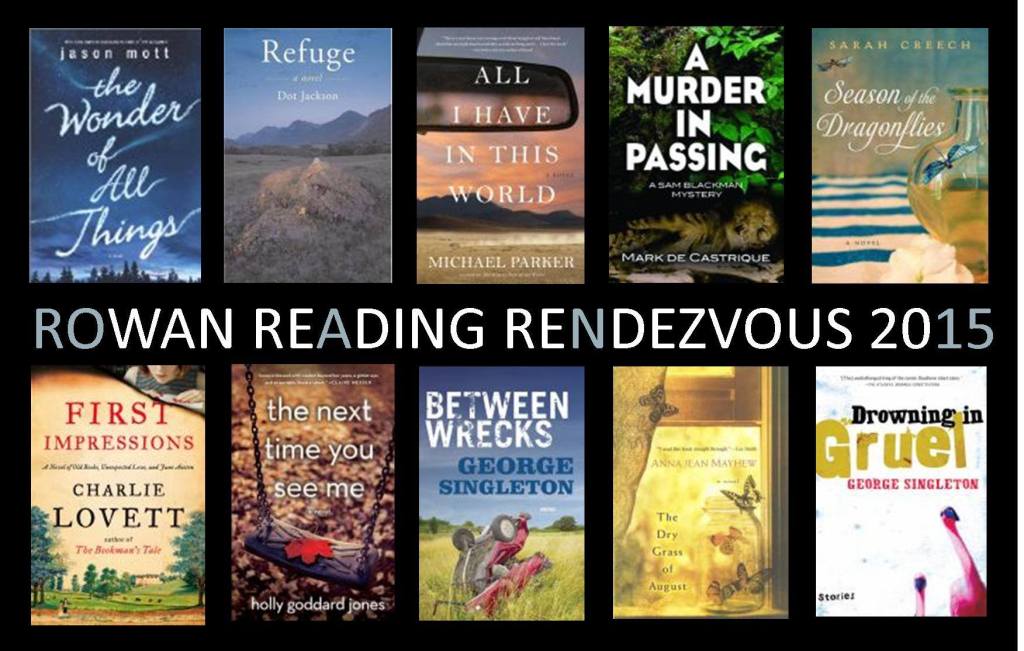 If you don’t come to the Rowan Reading Rendezvous on Saturday, March 21, you will be missing a chance to meet outstanding authors. That’s one reason to go. You’ll also meet people who love to talk about books. And you can buy books and get them signed all in the same place. Better bring a few tote bags.

Authors love to hear from their readers, and in intimate settings like this, they can chat with fans and get feedback. For the reader, it’s a chance to know the person who writes what you love.

It’s not often this much talent gathers in Salisbury. Once you meet someone like Jennifer Hubbard, you can put a notch in your literary belt and say, “I knew her when,” because she’s earned many accolades with her second novel, “And We Stay.”

The Second Annual Rowan Reading Rendezvous will be at Rowan Public Library Headquarters, 201 W. Fisher St., from 10 a.m.-4 p.m.  Some authors will speak about their work throughout the day with the final author presentation beginning at 3 pm. If you want your book signed, you must buy it at the library, because all proceeds benefit Friends of Rowan Public Library.  No outside books will be allowed.

Here’s the list again, with insights gleaned from Deal Safrit, the organizer, and Deirdre Parker Smith, book editor. Some authors are old friends, like Dot Jackson. Others are long acquaintances, like Bob Inman, and they are all the kind of people you could sit down with and have a Cheerwine — or something stronger.

Of George Singleton’s nine books, Safrit has read five — novels “Novel” and “Work Shirts for Madmen” and three of his story collections. “These People Are Us,” his first collection and now sadly out of print, and his two most recent collections, “Stray Decorum” and “Between Wrecks.” With “These People Are Us” Singleton burst upon the bookstore scene in 2001 where before he had only been published in magazines and journals, though three of his stories had been included in 1990s volumes of “New Stories of the South.” He also entered into the lives of those living in the South, either physically or their imagination, and he turned on an audience with his stories full of irreverence, humor and the pathos of everyday life. Many of the stories, as well as the two novels, reflect the rural South and the South Carolina Singleton lives in and the environment that surrounds him, including his artist wife, a potter, and the stray dogs and cats they have collected.  Should you want a recommendation for a single Singleton book, any of them is best.  Once you read one Singleton, you will forever read him.

Singleton’s two most recent books are published by the non-profit Dzanc Books, which also  published the debut novel “Byrd” by guest author Kim Church of Raleigh. “Byrd” begins in the South of the 1970s where the paths of a young woman who loves books crosses with the path of a young man who loves blues guitar.  Right there Safrit thinks Church must have been channeling him personally, for although he is not musically talented, he does love the blues and, of course, books. “Byrd“  then moves to the West Coast where these two come back together some years later, and life smacks them full in the face. “Byrd” is one of the books by this year’s visiting authors, that neither Safrit nor Parker Smith have read and it is on Safrit’s list to buy at next Saturday’s event.

In a way, Salisbury-Rowan has a small connection with Hub City Press in Spartanburg, S.C.  Anne Waters, former owner of Green Goat Gallery in Spencer and former Salisbury resident, now works for Hub City as Bookshop Manager.  Hub City is also the publisher of books by two authors who will be at the Rendezvous, Jon Sealy and Michel Stone.  Sealy’s “The Whiskey Baron” is a historical novel set in 1932 South Carolina, focusing on mystery and revenge amongst Sheriff Furman Chambers, under-the-radar whiskey baron Larthan Tull, and a man named Mary Jane Hopewell who is suspected of a double shotgun murder.  Sort of makes one think about the old song “A Boy Named Sue,” doesn’t it?  But this fine book, which has received some outstanding reviews, will take a little longer to read than it does to listen to that silly song.

Stone’s “The Iguana Tree” is not only an award-winning novel, but a book which has been chosen by several colleges and universities as first-year common reading. A story of illegal Mexican immigrants heading to Lowcountry South Carolina, the book reflects not only the limits of love, life and possibilities faced by the family and, ostensibly, all immigrants in their situation, but also the limited parameters and barriers of the American culture and society.

Both novels from Hub City are on Safrit’s to-buy list, just like last year’s “In the Garden of Stone” by Susan Tekulve, he has never met a book from Hub City Press that he did not like, and both of these look fine indeed.

Sarah Creech, author of Seasons of the Dragonflies, a story of flowers, sisters, practical magic, old secrets, and new love. Creech is a native of the North Carolina foothills and teaches English and creative writing at Queens University of Charlotte.

Mark de Castrique, a mystery writer with two series, Sam Blackman and Buryin’ Barry, has led workshops on writing the mystery, with emphasis on details and character. The character Blackman is an Iraqi veteran who lives in Asheville. Sleuth Barry Clayton is an ex-cop who takes over the family funeral home business in fictional Gainesboro, N.C., and is a sheriff’s deputy. De Castrique is a native of Hendersonville who lives in Charlotte and is a friendly, soft-spoken man.

Jenny Hubbard, award-winning young adult novelist (most recently a Printz honor for “And We Stay,”) is also an accomplished actress, former prep school teacher, poet and artistic director of St. Thomas Players. She coordinated the 2014 Summer Reading Challenge, too. This Renaissance woman loves to talk literature and is working on her next novel.

Robert Inman‘s fifth novel, “The Governor’s Lady,” shows how politics brings out the best and worst in people and how the public arena affects politicians’ values and relationships. Inman was  the anchor for WBTV news for many years, then known as Bob, and has written a number of screenplays, as well as a musical, and a children’s book. He’s a great storyteller, with likable, quirky characters. A favorite was “Home Fires Burning,” about a veteran newspaper editor in a small Southern town during World War II.

Dot Jackson is a jewel. She’s full of opinions and insights, she cares for the land and the people in it. She was an award-winning reporter and columnist at the Charlotte Observer for many years. Her single novel, “Refuge,” is based on a long untold family secret, and it sat idle while the people involved passed away. Getting it written and resurrected is a story unto itself. Dot has dozens of fascinating stories to tell.

Holly Goddard Jones, author of “The Next Time You See Me,” came to the Summer Reading Challenge in 2013 to talk about her haunting story of a murder and all the people affected by it. This, too, took place in a small Southern town, and is full of atmosphere. The New York Times said she has a “talent for making even scenes apart from the central mystery feel suspenseful.” Jones is a native of Russellville, Ky, and lives in Greensboro. Her new novel is scheduled for release in 2016.

Charlie Lovett has a new book, “First Impressions: a novel of old books, unexpected love, and Jane Austen,” is a brilliantly imagined mystery featuring one of English literature’s most popular and beloved authors. Lovett is a native of Winston-Salem, and a graduate of Davidson College.

Anna Jean Mayhew, whose debut novel, “The Dry Grass of August,” is a cautionary tale of racism, with a horrifying event that changes a young girl forever, and causes her to question her own family’s belief. Mayhew, a native of Charlotte, has never lived anywhere else, but travels with her Swiss-born husband. She is working on her second novel, “‘Tomorrow’s Bread.” She’s also writer-in-residence at the Weymouth Center for the Arts and Humanities. Mayhew remembers the days of segregation all too well, and created vivid situations and characters.

Jason Mott, NY Times bestselling author whose debut novel, “The Returned,” inspired the hit television series “Resurrection.” Mott is the most humble author you’ll meet. Fame has done little to change the person he is, and when he appeared at the RRR last year, he was still amazed by his success. It didn’t happen overnight. Mott had one of those dead end jobs that involved angry customers. He’s loving every minute of his life and is grateful for all he’s earned. He is also a poet. His second novel, “The Wonder of All Things,” is a tale of love, sacrifice and the power of miracles. Michael Parker is a favorite North Carolina writer, starting with “The Watery Part of the World,” which managed to deal with race, class, mental illness, superstition and cataclysmic weather all at once. His latest novel, “All I Have in this World,” is smaller and more tender, occurring in a small place with people who have troubled hearts and minds. Parker doesn’t shy away from problems in this novel, either, writing of teen suicide, difficult parental relationships and failed dreams. Parker doesn’t try to fix things, it seems, instead, the events draw naturally to a compromise, which is a pretty good thing. He lives in Greensboro and Austin, Texas, and is not to be confused with poet Alan Michael Parker.

Rose Senehi is driven. She know what she wants, she’s worked out a formula to get there, she’s played her margins and moves like an investment banker. The author of romantic thrillers often set near her Chimney Rock home, Senehi touches on environmental themes and celebrates the everyday people she meets. Her latest novel, “Dancing on the Rocks,” is an account of painful memories of a child who disappeared in the middle of the night 30 years ago.
All of the books mentioned above are available for checkout at the library, as well as other titles by these talented authors. The tentative speaking schedule is as follows:

The list of authors and speaking schedule are subject to change, so visit www.rowanpubliclibrary.org and like us on Facebook at https://www.facebook.com/rowanpubliclibrary for the most up-to-date information about the Rowan Reading Rendezvous.