Quest for the dress: Finding the right fashion key to prom 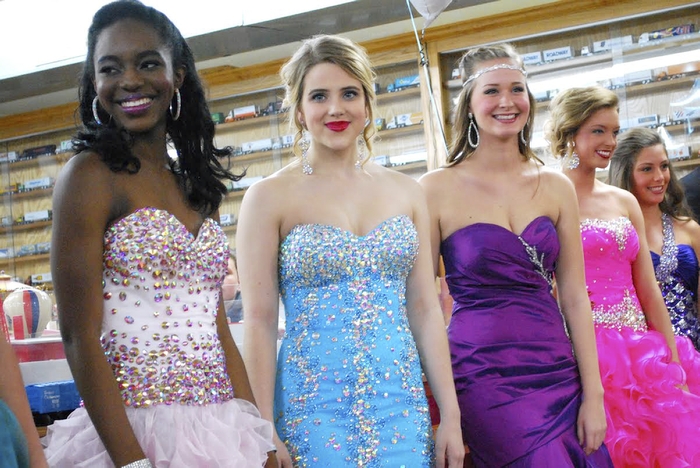 So much more than just a dance in the school gymnasium, today’s prom is a life-changing experience for many of Rowan County’s upperclassmen high-schoolers. There’s the nails, the hair, the dinner beforehand, tuxedos to match a date’s dress, and even elaborate prom-posals — that’s right, prom-posals.

“This is the one night when you have to do it all,” said Carson High senior Miranda Brady.

And at the core of the experience is the prom dress hunt. With area proms being held from late April to mid-May, the search is on.

To light the imaginations of prom dress shoppers, Encore Elegance — a 3-year-old business offering a mix of new and consigned prom dresses among other formal wear — held its very first prom fashion show on Monday evening. The show, hosted by the Spencer Doll and Toy Museum, featured 15 female models and two male models, and drew 96 attendees.

Fulfilling everything from “letting your inner goddess shine” to helping you “take a walk on the wild side,” the featured dresses displayed a range of styles and colors.

This year’s trendiest colors are coral and teal, Scottie says.

“Lace is very popular, and the more covered in rhinestones and crystals, the better. It’s all about the bling,” Scottie said.

Also popular are softer, flowy fabrics, and styles that emulate dresses worn by celebrities like Taylor Swift, such as two-piece dresses that show a small amount of midriff, says Brenda Neely, owner of A Perfect Dress special occasion shop in China Grove.

To find high-school-aged models for the fashion show, Encore Elegance held a Facebook contest. All of the female entrants were accepted, and two male models, Northwest Cabarrus High juniors Caleb and Cody Hill, were recruited to pose with the ladies.

“I’m not gonna lie — it’s fun,” a grinning Caleb said of his experience escorting the female models on the catwalk.

With several thousand dolls donned in a multitude of styles on display, the Spencer Doll and Toy Museum was a fitting venue for the parade of prom fashion.

“Through the dolls, you can see how the fashions have evolved over the years,” said museum founder Beth Nance. Dolls at the museum showcase styles ranging from Shirley Temple to Jackie Kennedy to Cher.

The museum aims to host as many fashion shows as possible, says Spencer Doll and Toy Museum volunteer Linda Sherrill. It’s good publicity for the museum, and beneficial to the models, too.

“Modeling the dresses gets the girls involved and helps them build confidence and self-esteem,” Linda said.

Hayley Wilhelm, senior at Carson High and one of the show’s models, agrees that it takes confidence — and courage — to model on the catwalk in front of a large audience.

“It was probably the most nerve-wracking but the most exciting thing of my whole life,” Hayley said.

Area proms will begin in the later part of April, with the majority of proms falling in May. Each prom has a theme which is often kept secret until the tickets go on sale. Past themes have included the “red carpet,” “The Great Gatsby,” and “Fly Me to the Moon.”

“I think it’s because they do the prom at the school, and it’s completely transformed with decorations. People are shocked,” Miranda said.

In addition to shopping at local retailers like Encore Elegance and A Perfect Dress, girls on the prom dress hunt travel to retailers in neighboring counties, stores such as Impressions Bridal & Prom in Concord.

“We encourage the girls to buy local, and give their local merchant a look,” said Brenda Neely.

At Encore Elegance, Scottie estimates that she sells between 400 and 500 dresses each prom season, ranging in price from $10 through $300.

Local demand for prom dresses is the reason that Encore Elegance — an offshoot of Scottie’s original business, Encore on Main — came to be, Scottie says. Encore on Main, an 11-year-old business, had a corner dedicated to prom dresses that drew increasing numbers of prom-going high-schoolers.

At first, a storage room was transformed to create Encore Elegance. Today, the shop occupies the entire floor above Encore on Main.

“It started as a little section of Encore on Main, and just kept growing and growing,” said Jade Bittle, marketing manager for both Encore stores and English teacher at Rowan-Cabarrus Community College.

And though you’d think that finding “the” prom dress would be a moment of joy and triumph for prom-goers, it can be bittersweet, Scottie says.

Like the corsages, hair appointments, and dinners on the town, the hunt — and the capture — of the right dress is part of the magic of prom.