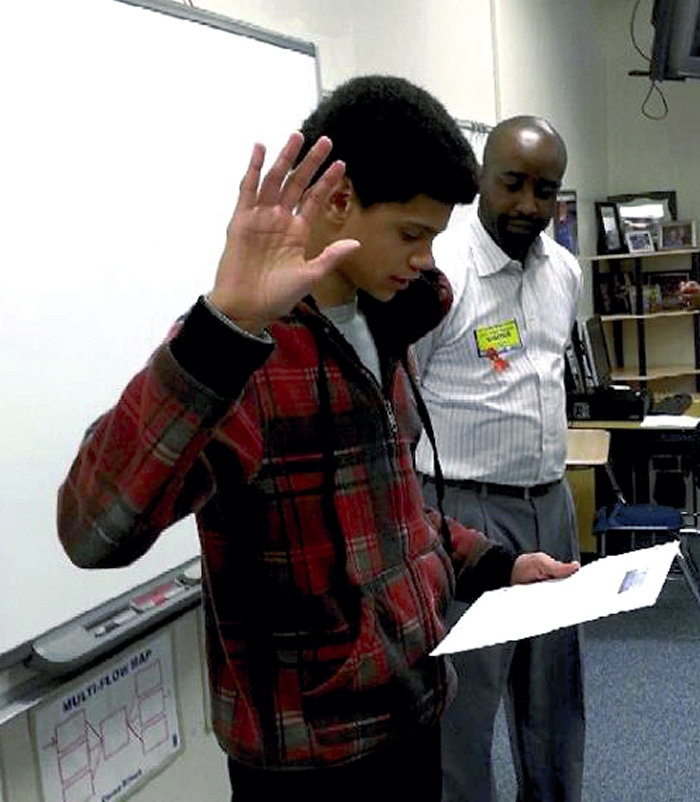 A student reads a pledge as he joins Project Bridge. Submitted.

Thomas Cousar’s new program, Project Bridge, is just a continuation of his ongoing mission to change the lives of minority adolescent boys.

Cousar currently has 13 students enrolled in the mentoring program at C.C. Griffin Middle School in Cabarrus County. He expects the group to grow to at least 25.

“We’re just trying to change lives of these youths,” he said, adding that their goal is to “bridge the gap between adolescence and adulthood.”

He said most of the boys in Project Bridge come from single-parent homes – specifically, homes without fathers.

That’s why Cousar and a handful of his friends have made a commitment to investing in the lives of these boys.

“Most middle schoolers struggle,” Cousar said. “We try to be that bridge to help them.”

Project Bridge meets by grades on Tuesdays, Wednesdays and Thursdays during the school days, and again on Thursday nights for all participating students.

The program officially started in February, and just received nonprofit status a few weeks ago.

“We have a great relationship [with the school],” Cousar said, adding that the teachers and guidance counselors let them know ways they can best help the students.

While Project Bridge only operates at C.C. Griffin Middle School right now, one could argue that the group was born in Rowan County when Cousar was a houseparent at Nazareth Children’s home for five years.

“I’ve been working with kids for all my life,” he said.

It was there he received training on how to build relationships with families and that he started the Young Men’s Club.

“We’ve done a lot of volunteering,” he said. “We’ve always been about the community.”

Not only did the group spend time volunteering in the community, but they would meet weekly to read “Letters to a Young Brother” by Hill Harper.

“We’d read a couple pages and then we’d just talk about it,” Cousar said.

The book focuses on the problems that most middle school students are focused on, including school, experiencing death, drugs and gangs.

“This book has been a gold mine for me in interacting with the children,” he said.

In early June, Cousar hopes to be able to take the boys on a retreat to Stone Mountain, Ga., for team and relationship-building activities.

They currently have $2,150, but would like to raise $5,000 to cover the expenses of the cabins, food, supplies and rental vans for the trip.

Cousar has started a GoFundMe crowd-funding page to raise money for the retreat. It can be found at http://www.gofundme.com/wclprojectbridge.