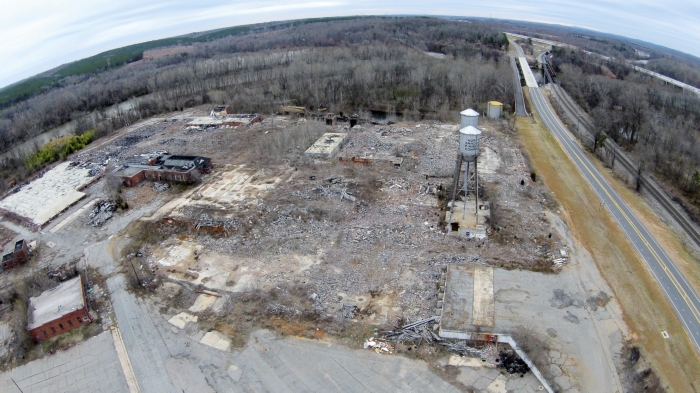 The leftover debris from the demolition at the former Color-Tex plant off US 29 north of downtown of Spencer. It has been 10 years since plans to build a raceway at the site were announced. Photo by James Poe for the Salisbury Post

The first thing you notice, besides the two towering water tanks, are the red bricks.

There are bricks everywhere. Big bricks and little bricks.

Some bricks are neatly stacked on pallets, most are scattered across dirt or pavement.

Bricks litter the ground at the site of the former Color-Tex plant — N.C. Finishing Company — north of Spencer off U.S. 29 on the banks of the Yadkin River. The site, which was abandoned in the middle of a demolition process, is now perhaps best described as a ruin. For someone who wants to know what the world might look like years after human civilization has ended, this place seems fitting.

The bricks were once part of the textile mill at the site, which for decades provided hundreds of jobs to the community and had a village nearby where workers lived.

But the old mill is gone. And in its wake is a seemingly endless field of debris: bricks, wood, tires, twisted iron rods, trash and overgrown vegetation.

The Color-Tex plant closed without warning at the end of September 2000. The plant’s major creditors had filed involuntary bankruptcy against the company, and its more than 300 employees were left without work. They weren’t even paid for their last week on the job.

In late 2001, a banker from Boston named David Risdon, who was on the Color-Tex board of directors, acquired the mill property. In the initial years afterward, while he dealt with back taxes on the land owed to the county, Risdon talked about turning it into a residential development.

In 2005, Risdon announced his grand plans for a luxury development and 2-mile race course at the site. It would be called “High Rock International Raceway.”

There would be townhomes, a retail corridor and, of course, the race track, which would attract people from around the world to this place on the banks of the Yadkin River.

“There’s no other track like this in North Carolina,” Risdon said in 2006.

He was right, because there was no track.

Whatever High Rock Raceway was supposed to be, it never came close to happening. Risdon’s plans constantly met roadblocks, both financially and legally.

But along the way, the town of Spencer did annex a majority of the property at the site in an effort to help the project get going. And Risdon did do some demolition, the old mill was torn down, and grading at the site before the county took him to court in 2007 to make him stop because he didn’t have proper permits.

Work was halted with a tremendous amount of debris left at the site.

In mid-2009, Risdon was ousted from the project and his longtime partner on the plan, Frank McGuire, and McGuire’s daughter took charge.

Risdon would later say the major problem was funding for the project was not there — though over the years he had repeatedly said it was.

It all came to an end after a Greensboro veterinarian, Anthony M. Flores, sued the company behind the project, called High Rock Properties, for not refunding his money. Flores, along with more than 100 other people, had put $25,000 down on a planned townhouse at Highway Rock Raceway

In September 2009, Flores received a default judgment in Rowan County Superior Court ordering High Rock Properties be sold to satisfy the his lien.

The land, about 200 acres situated on both sides of U.S. 29 with an assessed value of $2 million and over $4 million in liens and encumbrances against it, would be auctioned on the courthouse steps. The debris field leftover from the demolition of the old mill at the former Color-Tex site north of Spencer off US 29. Bricks and wood cover most of the ground.

About two dozen people gathered at the courthouse on an early December morning in 2009 for the High Rock Properties auction. The auctioneer tried to start the bidding at $50,000, but no one went for it.

The man who eventually won the auction was Donald Rand, a grading contractor from Mount Ulla. His initial winning bid was $800.

Rand, who runs Spinnaker General Contractors, beat out Harold Arthurs, who told the Post at the time he wanted the property for pasture land for his cows.

Spinnaker had done some grading work for High Rock Properties at the site.

But the sale of the property continued for months because of a rule that allowed a person to place an “upset bid” after the initial auction. Each new upset bid extended the deadline.

Rand currently holds the property under a company called Fennegan and Murphy.

The day he initially won the auction, Rand declined to comment on plans for the site. And since then there has been seemingly no activity at the property.

Reached by phone, Rand said he can’t openly discuss his plans for the property.

He did say he and his partners, he wouldn’t say who they are, are still working to find a way to develop the site. He said his group still thinks the area is a worthwhile economic-development opportunity — whether it’s for a race track or industrial use.

He said the economy was “upside down” when he acquired the property and that the slow recovery has been a problem in trying to develop the area.

And a cleanup of the site is exactly what Spencer Mayor Jody Everhart wants to happen.

Everhart said it’s going to take a coalition — at the county, state and federal levels — to get the property cleaned up.

Since August 2009, the town has been fining the site’s property owners $75 a day for not cleaning up the demolition debris. The current balance is more than $153,000.

Rand said he is aware of the fine.

On Wednesday, Everhart will travel to Raleigh with other town officials for the North Carolina League of Municipalities Town Hall Day. He said cleaning up the former Color-Tex site is his top priority for the meeting, which allows municipal officials to talk directly with state legislators about their concerns.

Everhart said he knows the clean up will be expensive — past testing found soil and groundwater contamination at the property.

The whole episode has been “really frustrating,” he said, adding he’s spoken with Rand once in the past six months.

Everhart has been mayor since 2002 and said the town worked with High Rock Properties to try and make the raceway a reality.

The town’s Board of Aldermen has, in the past, talked about different ways to try to get funding for the cleanup, but things never came together.

But the past is in the past, Everhart said.

“What we got to do is find a way to clean up the site,” he said. The water tanks, which have the words “N.C. Finishing Company” on them, rise above the debris at the former Color-Tex plant site.

It’s a late Thursday afternoon and the fading sun is making for a pleasant, comfortable evening.

There’s a small church, Yadkin United Church, just across the road from the spot where the old mill once stood. The church was built in the 1930s for the mill workers and their families who lived in the village just over the hill behind the church.

On a wooded piece of land across a road that runs up the hill, the man who helped revive the church wants to build a museum dedicated to the region’s history.

Gary Hauze and a partner bought the land for the “Yadkin Historical Museum” late last year. Hauze knows it will take time for the museum to become a reality, but he hopes it can be a catalyst for growth in the area.

“Hopefully, what we’re doing out there will lead to more things happening,” he said.

Just over the hill is a small neighborhood where the mill village used to be. A few of the mill homes, now dilapidated, are still here.

It seems like a nice, quiet neighborhood. Two young boys play outside while a lazy dog looks on. A man sits alone on his porch, looking relaxed as the sun sets.

Some of the houses closest to the mill property are vacant, said Brandon Hamilton, who moved into a house along U.S. 29 about a month ago. He said the vacant mill property isn’t an issue with him, though he thinks people may dump trash there occasionally.

A little farther away, across Peace Street, is the home of Robin Engel. She has lived in the house about a year and said she likes the area.

Engel said she would like to see the former mill site redeveloped and include access to the river.

She is fascinated by the mill’s history and said she heard about the plans for a museum and thinks it’s a great idea.

It’s often said that a knowledge of history is important for understanding the present and preparing for the future.

Mayor Everhart was a spectator at the courthouse when the High Rock Raceway property was auctioned off in December 2009. When asked that day about the future of the race track, a skeptical Everhart told a reporter for the Post, “There’s always a chance.”