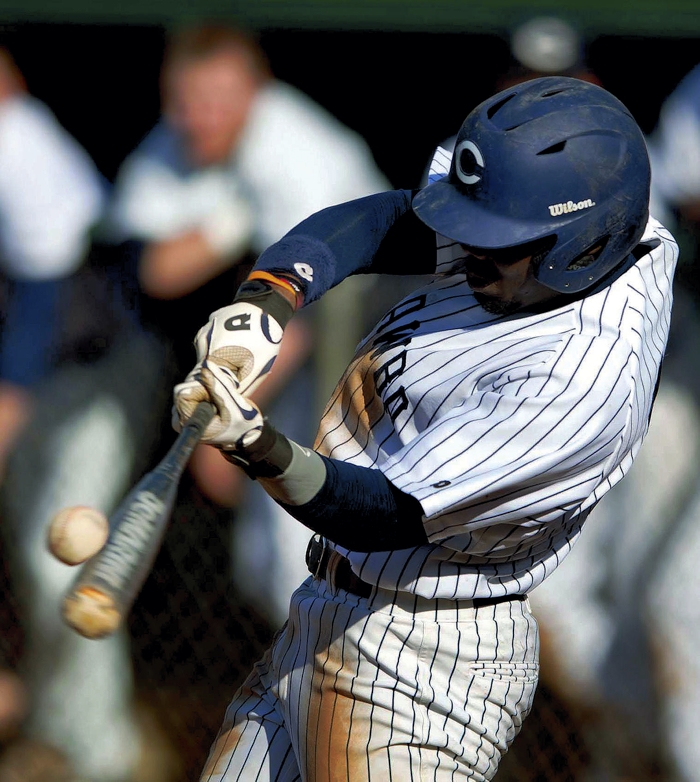 For his second one, the former Salisbury High and Rowan County American Legion star only had to wait two hours.

Bowden’s three-run homer provided a strong start for the Indians on Sunday at Newman Park, and his two-run blast in the eighth inning provided an 8-7 lead and eventual victory.

Now in first place in the SAC baseball standings, surging Catawba (19-4, 11-3 SAC) has won eight in a row and 17 of 18 in a sport not conducive to long winning streaks.

“I really like our team, but we’ve been fortunate,” Catawba coach Jim Gantt said. “If this was a seven-inning game today instead of nine, we don’t win it. That’s a good-hitting team we were up against. They run a lot of grown men up to the plate.”

Catawba scored six times in the bottom of the first inning, with Blake Houston and Grayland Fowler setting the table with ground-ball singles. Will Albertson singled for a 1-1 tie, T.J. Wharton walked, and Craig Brooks and Dylan Richardson produced RBIs before Bowden jumped all over a 1-0 fastball and homered to right-centerfield for a 6-1 lead.

“I knew it had a chance, and it was pretty exciting when it went out,” Bowden said. “The guys were cool about it. I didn’t get the silent treatment for the first one.”

After that explosive start, the Indians were silent against Lincoln Memorial hurler Wes Todd, and the Railsplitters pounded away. It was 6-all after three innings. Then LMU (12-10, 9-6) went on top 7-6, in the seventh frame on a homer by Ryan Burlison.

“We didn’t have anything offensively after the first,” Bowden said. “But then Dylan (Richardson) got a big hit to start the eighth.”

Richardson’s  double off the wall finally knocked out Todd. Then Bowden launched a go-ahead, two-run homer on the first pitch thrown by reliever Nick Morabito. It was a fastball down the middle.  Bowden didn’t miss it.

“It was just unreal to hit two in one game,” Bowden said.

Bowden has been a fixture in the lineup, mostly because of his stellar defense at first base, and now his bat is catching up. He’s batting .307 with 24 RBIs out of the No. 8 spot in the lineup.

Grant got three key outs after Burlison’s homer off Bowles. McClintock got the last five outs and earned his first win.

“We loaded the bases after Bowden’s homer in the eighth, but they got Albertson and Wharton out with the bases loaded,” Gantt said. “I was afraid that was going to give them a lot of momentum for the ninth, but McClintock was really good again.”

Gantt was tempted to use McClintock to save Saturday’s 3-2 win in the middle game of the series, but Shaefer Shepard made a three-run homer by Wharton stand up with a complete-game effort.

“That was big because it allowed us to use McClintock for more than one inning today,” Gantt said.

LMU limited Albertson to three singles in five at-bats, so he was 9-for-11 in the series. Brooks helped out with a 2-for-3 effort at the plate.

Catawba plays at Barton on Tuesday